Preview of Ralph Nader and Democracy Rising's visit to Austin 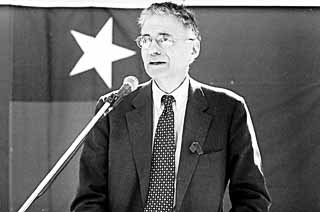 South Austin resident Hugh Moore doesn't consider himself a Green Party sort. Yet the conservative Republican-turned-independent liked what he saw in Ralph Nader, the Greens' presidential nominee in the 2000 election. "I voted for him," the gray-haired, bespectacled Moore enthused the other day. "I liked his honesty."

Moore, who is a year shy of retirement, was particularly impressed with Nader's arguments against a privatized Social Security system. "He was talking the real world," said Moore, a government instructor at Austin Community College and a former state media coordinator for the Concord Coalition, a fiscal-minded group that advocates safeguarding Social Security and Medicare. "He knew the issue -- he didn't pick it up from spinners or political consultants." Still, Moore allowed that he doesn't see eye-to-eye with everything Nader stands for. "I'm not a liberal," he said. "I don't focus on corporations as much as he does. But with Enron, I may be changing my mind."

Ah, yes, Enron -- current poster child of corporate greed. As it happens, the daily unraveling of events leading up to the Enron collapse is timed perfectly with Nader's appearance in Austin on Saturday, Jan. 26 -- the first stop in his 2002 "People Have the Power Tour.-- The event is sponsored by Democracy Rising, the newest addition to the consumer advocate's portfolio of grassroots organizations. In Nader-speak, Democracy Rising seeks to unify people "in the cause of freeing American politics from the grip of corporate interests." Unlike Nader's Public Citizen, say, or Clean Water Action, Democracy Rising is a traveling road show of super-rallies designed to whip up grassroots activism. Nader's media man, Jason Kafoury, has become adept at plopping down in a given city and mobilizing forces to throw a rally together in just three weeks' time. By day, he works the phone; at night, he distributes fliers along Sixth Street and other hotspots. Central Florida and New York City are Kafoury's next stops on the tour.

This visit will mark Nader's first appearance here since his October 2000 rally that drew some 5,000 people to South Austin's Toney Burger Activity Center. On Saturday night, the Burger Center will again turn into Activist Central, with more than 75 local grassroots groups on hand to peddle their literature and solicit petition signatures for various causes. Columnist Molly Ivins, a Democrat who isn't shy about singing Nader's praises, will emcee the rally, populist commentator Jim Hightower will address the crowd, and musicians Patti Smith and Jackson Browne will perform.

In scheduling the Democracy Rising tour, Austin popped up as a natural spot to hold a populist-spirited rally. "There are a lot of progressive groups in Austin, and they delivered quite a vote for me," Nader said in a recent telephone interview, in reference to the 31,219 Travis County voters who backed the Nader/Winona LaDuke ticket. "And I think it's a good beginning for any kind of political reform movement in Texas." If the national tour also serves to jump-start a presidential bid in 2004, so be it. But Nader said it's too soon to tell whether he'll run again ("I don't like long campaigns").

For now, the tour is being plugged to spark more interest in the Green Party and to encourage more citizens to run for office on the Green ticket. "Sooner or later, the Democrats will get the word," Nader said. The tour also serves another purpose -- to promote Nader's new book, Crashing the Party: How to Tell the Truth and Still Run for President, which recounts how the Democrats vilified him as a third-party spoiler and how the press all but ignored him on the campaign trail.

In Austin, we can expect Nader to draw on the Enron experience to further his argument for corporate accountability. Granted, he may be preaching to the choir, but recent events on the corporatization-of-America front may bring out some new folks who, like Hugh Moore, didn't pay much heed to the mantra until the Enron scandal broke. "The checkpoints on corporate crime, fraud, and abuse have been compromised or weakened or nullified over the last few decades," said Nader. "All of it amounts to Enron being above the law. As corporate powers become more powerful, you have the whole 20-year deregulation mania, which is another way of taking the federal cop off the corporate beat."

Sounding an optimistic note, Nader said the Enron scandal might put the necessary pressure on President Bush to sign the McCain-Feingold bill, which would ban "soft money" contributions from, among other sources, corporations such as Enron. The Houston giant fed millions in soft money to dozens of political officeholders in Washington and Texas. "The real challenge," Nader continued, "is whether Congress and the White House and the SEC [Securities and Exchange Commission] will go for systemic improvement in corporate accountability laws as a result of Enron, or will it just try and quarantine Enron and treat it as if it's just a bad apple."

On the local level, Nader is expected to address various grassroots causes, such as the organized opposition to the Longhorn Pipeline project, and the effort to have the Austin Fair Election Act, a public-private finance reform proposal, placed on the next city charter amendment ballot. On the former, Nader applauded the city's efforts to bring the federally regulated pipeline into compliance with local environmental laws -- despite a federal judge's ruling that the city has no legal standing. "I would advise the city of Austin to keep challenging the whole safety of it to safeguard drinking water supply and other highly exposed proximate sites to the pipeline," he said. Whether the city will follow Nader's advice is uncertain. But something has to be done, Nader said, to shake up the federal Office of Pipeline Safety, which he characterized as a "completely captive agency" whose standards are written by the very industry it's supposed to regulate.

David Cobb, a spokesman for the three-year-old Green Party of Texas, is hopeful Nader's visit will stir up more enthusiasm for the fast-growing organization. Since its inception in 1999, he said, the state party's database has grown from 500 names to about 10,000. Cobb credits Nader for much of the party's growth in the state, where local chapters are now flourishing in cities beyond Dallas, Houston, Austin, and San Antonio. "Whatever candidate the Green Party runs -- whether it's Ralph Nader or anyone else -- we're doing it to build numbers as much as to build a movement," Cobb said. While the Green Party has recruited voters from both major parties, the state spokesman said his group is targeting those who don't bother to vote on grounds that it wouldn't matter anyway. "Regardless of political ideology," Cobb observed, "most people recognize that they are not in control of their own lives."

Nader elaborated on that theme: "The common impression is that people have lost control over everything that's important to them, whether it's their children, their environment, their government, their privacy, their genes ... their ability to have a voice when they have grievances. They're ripped off by the banks, the insurance companies ... There's been a real accretion of corporate power every day. It adds up."