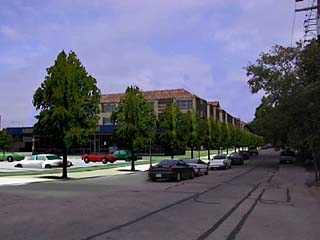 "MF-6" isn't an evil robot from the next Star Wars episode, but Austin's code for "multi-family 6" zoning: a rarely applied standard that limits the height of structures but not their density. Under MF-6, developers can in principle cram hundreds of people -- and their vehicles -- into quite a small space. When the City Council approved the MF-6 zoning request -- "subject to conditions" -- for The Villas on Guadalupe student housing complex on the first of three readings Jan. 10, members of the North University Neighborhood Association and other property owners who live near the proposed development were outraged. They worry that the precedent set by the Villas may mean that developers will inundate their neighborhood with behemoth MF-6 complexes.

The Villas, a 150-unit student housing complex and 395-space parking garage proposed by Villas on Guadalupe Limited Partners for a 2-acre area bounded by Guadalupe, 27th and 29th streets, and Hemphill Park, would provide upscale housing to around 500 UT students. Despite its name, the Villas would not front Guadalupe, but would primarily face the western side of Hemphill, a one-way street whose eastern side includes single-family homes, duplexes, and other small residential dwellings. NUNA members say they don't oppose relatively dense student housing on the site, but object to this project's size, scale, density, and potential to increase traffic in an already car-heavy area. NUNA attorney Rachael Rawlins acknowledges that some apartment complexes on Hemphill are even denser, but says those buildings are tiny by comparison.

"MF-6 could radically change the face of inner-city neighborhoods," Rawlins said. "There are no guidelines as to its location. The zoning has been on the books for a long time, but never used." (According to officials from the Neighborhood Planning and Zoning Dept., only three instances of MF-6 zoning exist citywide.) MF-6 imposes a 90-foot structural height limit, but allows for an unlimited number of units.

At City Council's Nov. 8 meeting, Mayor Pro Tem Jackie Goodman had offered a motion applying height and site-area standards closer to MF-4, a designation that limits the number of units to 54 per acre. Council approved this unanimously, seconding earlier recommendations for less density by the Zoning and Platting Commission and the Planning Commission. But on Jan. 10, after dozens of NUNA members and other neighborhood advocates testified against MF-6, Goodman and Daryl Slusher joined Mayor Gus Garcia and Danny Thomas in supporting Will Wynn's motion to approve a "conditional" MF-6, as recommended by city staff. The one thing both parties agreed upon was a 500-resident cap, Goodman said, "and that's what my original motion was a shot at. It didn't really matter that the zoning in that motion didn't change the MF-6 designation, because the development standards were MF-4." Under city staff guidelines, the maximum number of Villas units will remain 150, with a 60-foot height cap.

Despite neighborhood outrage (see "Postmarks" this week and last), Goodman denies reversing her position. "I didn't switch," she insists. "First reading was still MF-6, [but the developers] just couldn't do MF-6 ... It's very easy, apparently, to misperceive what's happening." Nothing's final until the third required reading and vote, she adds; council will likely conduct a second reading at its Feb. 14 meeting.

Yet members of NUNA, Eastwoods, and other nearby NAs remain angry at Goodman and Slusher, who seconded Wynn's motion. NUNA President Jerry Roemisch and other NUNA members say they met with the mayor and every council member but Thomas (whose aide met with the group), and they believed they had commitments from a majority. "It seems there's an evolution towards moving away from pro-neighborhood rhetoric to moving towards the financial powers -- even Garcia," Roemisch said.

Slusher says he never promised NUNA he would oppose MF-6. "My practice is, I don't say how I'm going to vote on a case until all the evidence is in," he said. "I don't think it's appropriate. I think I told them that." The need for more student housing near UT prompted Slusher to vote for the higher density, he says, adding that he will continue to examine the project. "If you can have high density anywhere, it can be there," Slusher said. "But I wouldn't vote to put something like that further north, nearer the neighborhood."

Villas project consultant Mike McHone says he opposes building MF-6 projects between single-family homes, but isn't against density in principle. He was also project consultant for one of the two other MF-6 cases, located in West Campus. "I think there was an unrealistic expectation by some of the neighbors who are very remote to this actual location that the project would be built a certain way," he said. No street connects the Villa site to the bulk of the North University neighborhood, McHone argues, and parkland separates it from the area where most Villa opponents live.

"It's much better to have apartments on the site than a hotel, fast-food restaurant, or other commercial development hat would really make it impossible to live there," McHone reasons. "My office is next to a McDonald's. It's amazing how many people drive through here." By providing fewer parking spaces than beds, the Villas partners hope to encourage student residents to stop relying on cars. "If we're trying to build a city that has people walking or biking to work or school, then we're failing," McHone says.

Goodman says she agrees with NUNA that putting more daytime traffic in the Hemphill Park area is "not a good planning goal," but points out that neither UT nor the students are going away. "When the neighborhood street parking was so out of control, and NUNA wanted a resident-only parking program for the neighborhood, I pushed that through," she said.

Not allowing apartments close to UT suggests that more students will have to live elsewhere and drive to class, Goodman continued -- "also not a good urban planning goal. If you have more multi-family, but not on a street like Guadalupe, then where else will they be proposed but further into the more single-family neighborhoods, as they have been in the past? That means more pressure on NUNA, Eastwoods, etc."

Yet rumor has it that another developer who owns tracts on West 31st might try to introduce MF-6 among NUNA's single-family homes. Without an official neighborhood plan, Roemisch and others fear an onslaught of developers will soon look to build their own Villas -- and bring along the accompanying traffic. "We need to go toward planned neighborhoods," Roemisch concluded, "rather than just plan for individual buildings."