Can Edison Pass the AISD Test? 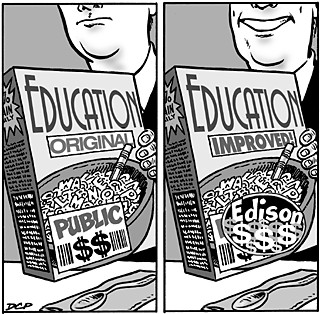 Tonight (Thursday), representatives of the for-profit school management company Edison Schools Inc. appear before Austin ISD Superintendent Pat Forgione and members of the Board of Trustees to present Edison's proposal to contract with the district to manage, in partnership with AISD, a cluster of up to 15 East Austin public schools. The proposal -- submitted to AISD Dec. 18 -- was created in collaboration with the Eastside Social Action Coalition, a school activist group concerned about inequities in Austin schools.

The New York City-based Edison currently manages 136 schools in 23 states (including Texas): Typically these are "low-performing" schools with a high percentage of minority and low-income students. Reviews of the 10-year-old company -- by researchers, parents, teachers, and district officials across the country -- have been mixed, and the criticisms often directly contradict the company's own assessments. Some say contracts with Edison cost too much, while doing too little to improve student performance. Yet parents of Edison school students often jump to the company's defense. Could Edison be the panacea for AISD's low-performing schools?

In October of 2000, the ESAC -- made up of a group of mainly Eastside parents, social activists, religious leaders and educators, led by the Rev. Sterling Lands II of the Greater Calvary Baptist Church -- presented the AISD trustees with a list of 20 demands aimed at getting the district to be more responsive to the educational needs of all children, especially children of color (see Sterling Lands' New Mission, Jan. 12, 2001). In September of 2001, after a year of protracted dialogue with AISD, the coalition contacted Edison, probably the best-known for-profit school management company, and asked if the company might be interested in Austin schools. The result, says Edison's vice president for development, Richie Butler, was the new proposal. "I was familiar with Rev. Lands, and I knew that he and the ESAC were really concerned about the schools in East Austin," Butler told the Chronicle last week. "He definitely wants kids in Austin to succeed."

Superintendent Forgione said he and his staff are looking forward to hearing the company's proposal, as well as that of the KIPP Network of Schools, which hopes to open a chartered middle school in East Austin. (KIPP -- the Knowledge Is Power Program -- is a charter school program that runs schools in Houston and New York City. The district is scheduled to meet with KIPP on Jan. 30.) Forgione hopes to make a recommendation to the trustees concerning Edison and KIPP by March 8. AISD board President Kathy Rider said she is interested in hearing what Edison has to say. "Edison has a mixed record; some say they are the best thing since sliced bread, and others want them run out on the rails," she said. "We need to hear their proposal and go from there."

Indeed, responses to Edison's record of school management have varied widely, and researchers say the overall program is difficult to assess. The company, founded in 1991 by former Esquire magazine publisher Chris Whittle of Whittle Communications, currently operates 136 schools -- both by charter and by contracted school district partnerships -- enrolling 75,000 students, 84% minority and 70% from low-income families. Butler says Edison generally contracts for the operation of a district's low-performing schools at the price-per-pupil that the district already budgets for those schools. In return, says Butler, Edison provides a rigorous, liberal arts-based curriculum aimed at getting all the schools' students learning -- and testing -- at or above district averages. According to the company, the hallmarks of an Edison education are eight-hour school days and a longer school year, teachers who stay with the same group of students for multiple years, and "fully integrated technology" (including individual lap-top computers provided to each student beginning in the third grade). The company's own September 2001 performance review claims that over the past six years, Edison students have raised scores on criterion-based tests (like Texas' TAAS) by an average of six percentage points per year -- even though 90% of Edison's schools open "with students achieving at levels less than the average level of the school district in which the Edison school is located."

Critics say the company's internal evaluations are misleading. "At this point, Edison schools mostly do as well or worse than comparable schools; occasionally they do better," reads the summary of a study conducted in 1998 and revised in 2000 by the American Federation of Teachers, the country's largest teachers union. "This mediocre record has not been evident to many observers of the Edison schools for several reasons," the report goes on -- AFT researchers say the company's promotional materials emphasize the most favorable data while broader information is difficult to obtain. Education Austin President Louis Malfaro said he believes the AFT study was a good one. "[Edison] are their own best promoters," he said. "They have had some successes and some failures, but, by and large, these people aren't doing any better after five years than we are."

Researchers at Western Michigan University came to similar conclusions. "The results were rather mixed," said Gary Miron, one of the WMU researchers. WMU's research showed that the Edison schools were doing as well as or slightly worse than their same-district equivalents, he said -- something Edison folks didn't want to hear. "They threatened to sue us and held up the release of the report for nearly six months," Miron said. The reason Edison looks like they're making larger educational gains, Miron explained, is because they are charting their success not against other schools -- but against themselves. In all, he said, Edison schools are educating fewer special-needs children, hiring fewer experienced teachers, and spending less on academic instruction. "They do have all these glossy reports, and they're so effective that people don't ask the right questions," Miron said. "But you don't see any evidence that they're working, except in their own reports."

Butler says the researchers' criticisms of student performance are misleading. "We're put in a difficult situation. We're given the worst of the worst [schools] and are expected to turn them around in a year," he said. "But benefits are long-term. That's what we're focused on, long-term benefits." To Butler, the long-term benefits of an Edison education aren't yet entirely obvious to researchers, since the longest-running Edison schools are only six years old. In fact, the schools often take an initial dip in test scores during their first year of operation, he said, because it takes a lot of work to completely "reconstitute" a school in the Edison fashion and make appreciable academic gains within one year.

Critics also charge that an Edison contract ends up costing more than initially advertised. Butler rejects that contention too, saying the company asks only for the district's budgeted per-pupil expenditure along with various other costs that the district maintains, like bus transportation. Further, Butler said, the company invests a good portion of its own cash into each of the schools they manage (in Austin, Edison's proposal calls for a $1.2 million infusion of company funds into each school it's assigned). In theory, the company will eventually make its profit by taking an undisclosed percentage off the top of the per-pupil expenditures -- although as of July 2001, Edison was yet to turn the corner and was $177 million in debt.

In Dallas, where Edison holds a five-year contract to manage seven of the district's lowest performing schools, the response is also mixed. The current board, The Dallas Morning News reported in August of last year, is skeptical about the cost -- more than $53 million -- associated with a contract awarded to Edison under the board's former president, a criticism echoed by Texas Comptroller Carol Keeton Rylander. But DISD board vice president Kathleen Leos, reportedly Edison's biggest Dallas critic, told the News that despite the board's fiscal concerns, parents of the district's Edison students support continuing the partnership with the company. "I think we need to ask the people who have children in these schools to tell us what they want," Leos said.

School districts elsewhere have sought to terminate their relationships with Edison, but parents have stepped in, most notably in San Francisco, where parental input caused the school district to retain its contract with Edison for the management of one of the city's lowest-performing elementary schools. The reason for this is simple, said Edison's Butler: Like any good company, Edison is intensely focused on customer service. "It's customer service and satisfaction," he said. "If our students and parents are happy day-to-day, then we're surviving." But according to a December 2001 press release from the San Francisco-based group Parents Advocating School Accountability, the city's sole Edison-managed school now ranks 75th in academic achievement -- out of the city's 75 public elementary schools.

San Francisco officials also complain of high teacher turnover in Edison Schools and the company's overwhelming reliance on younger, inexperienced teachers -- a problem noted also by WMU's Gary Miron. Other worries are more theoretical: Does the introduction of private for-profit companies into the public schools further erode our system of public education? To EA's Malfaro, contracting with a private company could, at the least, erode the public accountability inherent in public education. "You lay another level of management in there," he said. "You get a contract with these people and then, if they begin to do things you don't like, they can pull out that contract and say, hey, you don't like it? Take us to court. It just puts the whole system one step further away from real accountability." But Butler rejects that reasoning emphatically. "I like to emphasize, as much as I can, that we are not here to try and take over," he said. "We are here to create lasting partnerships whose focus is providing a world-class education for all students."

Sterling Lands says he knows all about the criticisms of the Edison system, but that he and ESAC remain interested in giving the company a shot at improving East Austin schools where AISD has not done the job. "I'm aware these people aren't perfect, but on average their track record is better than AISD's," he said. "I see this as an opportunity to move beyond the status quo."