The EPA and TNRCC jump on environmentalists' bandwagon by accusing Alcoa of violating the Clean Air Act. 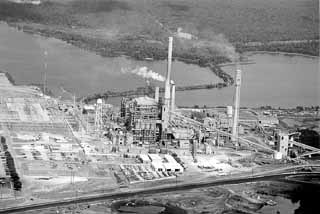 In the Better Late Than Never Dept., the Texas Natural Resource Conservation Commission and the Environmental Protection Agency notified Alcoa on Jan. 9 that it was operating in violation of both federal and state clean air laws due to equipment upgrades it made at its Rockdale facility in the mid-Eighties. The notification reflects -- and in fact, was spurred by -- identical charges made in a lawsuit filed by environmental groups in December (see "Aluminum Can'ts," Jan. 11, austinchronicle.com/issues/dispatch/2002-01-11/pols_feature4.html ).

The Rockdale power plant, which fuels an aluminum smelter at the same site, was one of many Texas facilities "grandfathered" out of compliance with the 1970 Clean Air Act. As recently as 1997, TNRCC data identified the plant, about 60 miles northeast of Austin, as the greatest single-point source of air pollution in Texas among such grandfathered plants. By law, any facility that makes major upgrades must seek EPA approval, relinquish its grandfathered status, and come into compliance with existing standards. Members of the Central Texas grassroots environmental group Neighbors for Neighbors said they reviewed TNRCC records and found evidence indicating that Alcoa's mid-Eighties upgrades were substantial, leading them to file a joint lawsuit with Environmental Defense and Public Citizen.

Alcoa maintains that its modifications were "routine maintenance," not major changes, and that the EPA knew about and signed off on the work. Now, however, the EPA and TNRCC officially agree with the environmentalists' findings and have slapped Alcoa with a "notice of violation" (a non-punitive warning). Further legal action might follow if Alcoa fails to respond to the agencies' satisfaction.

A TNRCC press release says state and federal environmental regulators have expressed concerns about sulfur dioxide emissions from the Rockdale facility "for almost 30 years." Still, the agency didn't act upon Alcoa's alleged wrongdoings until Neighbors for Neighbors brought them to light, a full decade after the modifications at Rockdale.

For the TNRCC's part, spokesman Patrick Crimmins insists that, contrary to their claims, the citizens group didn't find its evidence in TNRCC files. The document in question, he said, was an EPA questionnaire that Alcoa had completed and then returned to EPA. (The EPA had not returned phone calls as of press time.) "It wasn't in our files. If [Neighbors for Neighbors] claim they found it in our files, subsequent to them presenting it to us, we looked for it and couldn't find it," Crimmins said. "Even if we had had that document, all [it] did was convince us that we needed to ask Alcoa for a lot more information. ... There wasn't any way you were going to be able to make the determination based on that single document."

Yet Crimmins gives credit to Neighbors for Neighbors for initiating the Alcoa inquiry. "There is no question that they initially brought this to our attention," said Crimmins. The EPA questionnaire led his agency to review other records and eventually to conclude that Alcoa's Rockdale upgrades constituted "a major modification program" requiring permits. "We certainly are going to be and have been criticized for being late to the party, as it were," he said, "but we're trying right now to do what we think is correct."

Alcoa representatives have claimed their company discussed the Rockdale upgrades with regulators 10 years ago, and neither the EPA nor the TNRCC seemed concerned at the time. And the company says correspondence between it and EPA, located in EPA files, backs up its claims. Crimmins said the TNRCC doesn't possess similar written records of an enforcement case or irregularities. "I don't know what [Alcoa is] talking about," Crimmins said. "If it was oral conversations at the plant or on the phone, I don't know what they're referring to. It's impossible to know. What we know is that we certainly would not have okayed ... this program if we had reviewed the documents that we reviewed in this inquiry."

But the environmental groups who filed the lawsuit against Alcoa provided another possible reason for regulatory foot-dragging, one that might be impolitic for a state agency spokesman to give. "The fact is, these agencies are incredibly outgunned by the technical and legal expertise that big companies like Alcoa can bring to bear," said Neighbors spokesman Ron Giles. "I'm not very surprised that it was under their radar screen. It took us going to the Rockdale library and getting old newspaper accounts, and I'm not surprised that the agencies were not able to pursue those kinds of angles. That's not their typical investigative method." The newspaper clippings corroborated information Neighbors had found in the TNRCC files, Giles said.

Public Citizen attorney Kelly Harrigan says staff and funding deficiencies at the regulatory agencies hinder their enforcement efforts. With restricted resources, achieving compliance -- including efforts to help industry understand and follow the rules -- becomes the first priority, she said. "And that's good, but there's a lot of bad actors out there that aren't going to clean up unless the agency starts taking enforcement really seriously."

If Alcoa doesn't respond to the agencies' notices, the company could become the target of another lawsuit -- this time from the federal government. That, however, might depend on the Bush administration's pending proposal to weaken relevant sections of the Clean Air Act (see "Bush's Xmas Stocking: Burning Coal?" Dec. 28, austinchronicle.com/issues/dispatch/2001-12-28/ pols_feature3.html ). The White House has proposed scrapping the requirement for EPA permission to upgrade; several Northeastern states have vowed to file suit if that happens.