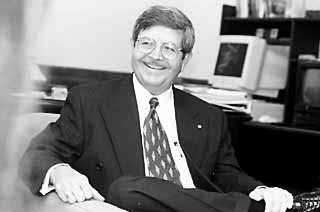 City Manager Jesus Garza will leave for the LCRA in April. (Photo By John Anderson)

As City Manager Jesus Garza officially announced his resignation at a crowded City Hall news conference on Tuesday, one media type asked him what he wanted to be remembered for.

"I hadn't thought about it," Garza quipped. "As someone who survived eight years, I suppose."

That may not sound like an achievement to be engraved in stone, but the last city manager to last so long, Dan Davidson, stepped down in 1983. It was Davidson who hired young Jesus Garza as an administrative assistant in 1978, thus beginning Garza's 20-year ascent up the city of Austin ladder. (From 1988 to 1993, Garza worked in Corpus Christi and at the Texas Water Commission, then returned to the city fold.)

On April 30 -- just before the next council election, curiously enough -- Garza will trade his City Hall office for a window seat at the Lower Colorado River Authority, fast becoming the Valhalla for ex-Austin bureaucratic warriors (see "The LCRA Pipeline," p.11). Talk has already started that Garza is being positioned to replace current LCRA GM Joe Beal when he retires.

"I believe I've accomplished what I set out to do as city manager," Garza told fans and friends at his news conference, including Davidson, former mayors Bruce Todd and Roy Butler, and former U.S. Rep. J.J. "Jake" Pickle. "There will always be more to do, and there's never a 'good time' to leave a job like this. But this is a good time for me."

And it's a good time for us, too. Garza is not just closing the book on his city service; he's also dropping the other shoe. By the time former Mayor Kirk Watson (finally) announced his departure to run for state attorney general, speculation was already rampant that Garza would soon follow him out the City Hall doors. And so he will, even more quickly than many expected.

Thus is begotten a nearly clean slate on which to write Austin's new political agenda. With a dormant economy, a new mayor, a critical council election cycle coming up, a raft of far-reaching charter amendments on the table -- from single-member districts to public financing of campaigns -- and now a lame-duck city manager, a lot of options are open, and many political folk see Garza's departure as an opportunity rather than a bummer.

Garza has been a long-serving executive, and much of the praise and tribute heaped upon his management skills this week is justifiable. In the trains-running-on-time sense, Austin could do -- and has done -- a lot worse in its choice of city managers. But Garza has never been an especially popular leader, with the community or with the city council, and more than once it's appeared that his job was seriously in jeopardy.

However, in the words of former Council Member Bill Spelman, "You get fired because you make the council or the bureaucracy look bad -- scandal and corruption. Making a good city government is more complicated, and city managers who do great things don't get recognized. So what we get instead is a reliable mediocrity -- if it's better than mediocre, that's great, but it's the reliability that matters. Every council has told Jesus Garza 'Don't make us look bad,' and he's been able to deliver on that promise."

Or, as former Mayor Bruce Todd told reporters at the Garza gathering, "Anyone who's served as Austin's mayor realizes how important the city manager's role is to how they are perceived by the public." 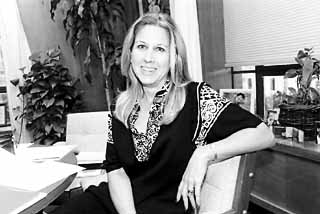 Kirk Watson realized this more, ultimately, than Todd ever did. By the end of Watson's term, community leaders grumbled that Garza, who had always displayed a bit of a tin ear for Austin political nuance, had become little more than the lord-in-waiting of the increasingly autocratic mayor. "There definitely was a transition," says Bill Bunch, executive director of the Save Our Springs Alliance. "In the early Watson years, the mayor still communicated with the environmental community, and Toby Futrell was in charge of land-use and growth management, and she was very decent." Futrell, who's climbed even farther up the Austin corporate ladder than Garza -- she started as a file clerk at the health department -- is now deputy city manager.

But then, says Bunch, when the enviros split with the mayor, "he and the city manager consolidated all the power, and there was no communication at all. To the extent that I give Garza any credit, it was because he let Toby do a good job. Once she was taken off those issues, it was bad."

An even dimmer view comes from frequent Garza critic Mike Levy, publisher of Texas Monthly and tireless e-mail advocate for his vision of effective city services. "If he did anything well, it was PR. He seems philosophically comfortable with mediocrity and afraid of excellence. We have a city where you can go from department to department, and none of the services are very good, except for EMS, where I've bullied the city into excellence, because I'm an asshole."

Yet Levy, like everyone else, has high regard for Futrell. "My advice for the council now is to run with Toby," he says. "Everyone who's come into contact with her knows she's quality. She's competent, honest, and understands the word 'accountability.' It's pathologically impossible for her to lie, cheat, and steal."

Bill Spelman, who feels there's "little evidence that [Austin government] is better now than it was several years ago," agrees that "if the council makes Toby the interim and then the permanent city manager, joy will reign throughout the Republic. I think she would be a terrific choice. She's smart and competent and politically aware without being devious."

Truth be told, anyone who stood in the way of the council's running with Toby Futrell -- whose interest in the position is well known -- would probably get hurt. Council Member Daryl Slusher and Mayor Pro Tem Jackie Goodman have already pumped for picking Futrell quickly, and although Garza said it would be "presumptuous" of him to voice a choice, he then proceeded to "highly recommend her" to the council at his news conference. "I think Toby is extremely qualified and could step into my job tomorrow if a bus were to hit me."

While Mayor Gus Garcia has not made such a public commitment to Futrell, "obviously that's how the city manager set it up," he says. "And Toby was a natural to take on the job. Plus, doing a national search is very expensive and time-consuming."

The last time Austin went national to find a manager -- Garza's predecessor Camille Barnett -- it took more than a year, during which Acting City Manager John Ware, himself a candidate, found a better job in Dallas. "Whatever we do should be done quickly," says Planning Commission chair Ben Heimsath. "We don't need to go from here to Kingdom Come to find that candidate. In this case, the process is a lot less important than the outcome."

As with Watson's departure, Garza's exit "raises questions about [the city's] following through on its projects," says Austin Neighborhoods Council President Jim Walker. "There are next steps to be taken, and you want the people with the institutional memory who have the capacity to make that leap. And unless they put somebody like Toby in charge, quickly, it's going to be harder."

But if Goodman, Slusher, and Beverly Griffith are replaced by citizens of different mind after the May elections, Futrell, the Queen of the Smart-Growth Frontier, may never move past the "interim" phase. Even without a cast change, the council is probably ready for a course change. The next manager, Futrell or otherwise, will feel from the council "a reasonable expectation that some things that should have been done now will be done," as Spelman says.

For Spelman, those are administrative changes -- sticking to the council-approved budget, holding city departments' feet to the fire (in public) for their performance, and "allowing city employees to be creative and innovative and get the job done. Right now, if you want to get anything big done, it has to go through the city manager his own self."

For others, the changes are external. "This council has made some good votes, but they haven't fundamentally changed how city government is run," says political consultant Mike Blizzard. "There need to be institutional changes that make the city more friendly to citizens and responsive to their input."

"This is a time where the council could really change the way the city operates," says Bunch. "In public, they want to say Jesus Garza is the greatest city manager, because that reflects on them, but behind the scenes people are always bitching and moaning and blaming him. Now they can change that, without it being ugly. If they're really disgruntled and want the city to operate more transparently and more cooperatively with neighborhood or community or environmental interests, now is their chance."