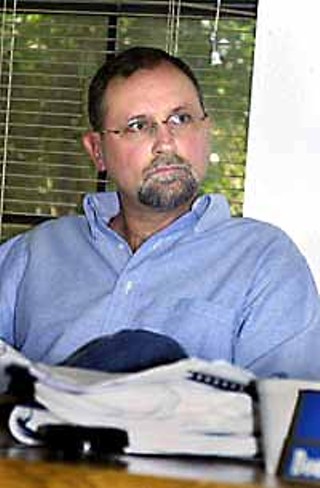 An attorney for the Creedmoor-Maha Water Supply Corp. says he will ask the Barton Springs/ Edwards Aquifer Conservation District to reconsider its decision to deny his client's request for more groundwater. Austin lawyer Mark Zeppa says he'll file a motion with the conservation district to try to "show the board why they made the wrong decision." Though Zeppa didn't comment on what may happen if the board again denies the requested increase, a logical next step would be for Creedmoor-Maha to file a lawsuit against the district.

After several hours of public testimony Jan. 3, the BS/EACD board deadlocked in a 2-2 vote (with board member Jack Goodman absent), which effectively nixed Creedmoor-Maha's request to pump more than 600 million gallons per year from the Edwards Aquifer. It was the largest groundwater increase ever asked of the conservation district, and the first time the district had ever turned down a request, said Jim Camp, one of the board directors who opposed the permit.

In presenting its case to the district, Creedmoor-Maha argued that it needed the additional 412 million gallons to qualify for a $600,000 federal loan the company is seeking to pay for infrastructure improvements in its service area. Zeppa told the board that although the water increase was a condition of the loan, the company likely would not pump the full amount granted for the year. Still, Zeppa noted that Creedmoor-Maha needed permission to pump such a large amount in order to justify the capacity of a planned 18-inch water line.

"I don't see evidence to corroborate that [the increase] is really a condition of this loan," said board president Craig Smith, who voted against the permit application. But Zeppa said the loan had already been tentatively approved pending Creedmoor-Maha's ability to secure the additional water.

Creedmoor-Maha currently pumps about 205 million gallons a year from the aquifer to service more than 2,000 customers in southern Travis County. According to documents the company submitted to the district, Creedmoor-Maha's future demands could include planned developments of nearly 6,000 new housing units, two schools, and possibly a shopping mall. The mall project, should it materialize, would be part of a large-scale development planned off I-35 in northern Hays County that involves often-controversial developer Gary Bradley.

Zeppa noted that most of the opposition voiced against the permit increase was related to growth and development over the aquifer. "But," he said, "the district does not have the power to regulate development. ... You cannot act in an arbitrary, capricious manner."

"I think we know that," Director Camp snapped from the dais. "Can we move on?"

Other arguments against the increase centered on concerns that continued groundwater use could ultimately deplete the aquifer in times of severe drought. That was one of the fears raised by the city of Buda in its letter of protest against the proposed increase. Of the parties contesting the permit application, only the city of Austin and the Friendship Alliance, a coalition of northwestern Hays County neighborhoods whose residents are largely dependent on aquifer water, made formal presentations to the board. Contestants also took issue with Creedmoor-Maha's pump tests, conducted on various wells to bolster its argument that the company's increased pumping allowances would not dry up the aquifer. The city of Austin countered that the tests were conducted during high water table conditions, making it impossible to gauge the true effect such pumping would have during dry periods.

After several hours of testimony, Board Director Bill Welch made a motion to approve the permit. Director Don Turner joined him in the vote. "I thought there was room for a compromise," said Camp, who had unsuccessfully offered a substitute motion to delay a board decision until Goodman could participate in the vote (although he likely would have also voted no), and to get more information about the requirements of the loan Creedmoor-Maha hopes to obtain from a division of the U.S. Dept. of Agriculture.