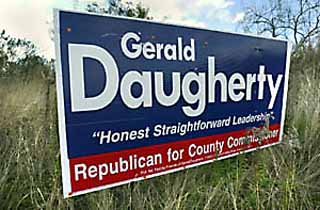 Pct. 3 Republican hopeful Gerald Daugherty is all about R.O.A.D. -- specifically, Reclaim Our Allocated Dollars, a nonprofit organization he founded in order to defeat Capital Metro's 2000 light-rail referendum. But in his bid for a seat on the Commissioners Court, has he forgotten that the roadside isn't his alone? Sprawling signs such as this one, located off the southbound access road of MoPac between Spyglass and Barton Springs Mall, are much larger than typical campaign signs. Some Austinites have contacted the Chronicle complaining about Daugherty's billboards. Signs posted in right-of-ways violate the city code. (Photo By John Anderson)

A coalition of peace advocacy groups will hold a candlelight vigil for peace in Israel and Palestine at 5pm Friday, Dec. 28 on the south steps of the Capitol. Vigils are expected to take place on the same day in more than 90 cities around the globe, including Jerusalem. The Austin vigil will feature music and poetry, and attendees will meet at the Cafe Marakesh, 906 Congress, immediately following the event.

Post Properties Inc., an upscale apartment developer that had planned to build the residential component of the controversial Triangle project at 45th and Lamar, pulled out of the deal last week due to concerns about the economy. In November, the Atlanta-based company dropped two subsidiaries to "streamline" operations.

For a second time, a drug raid executed by a Travis County Sheriff's Office SWAT team and Capital Area Narcotics Task Force in Del Valle ended in an accidental casualty. Just after 6am on Dec. 20, officers entered the home of 19-year-old Antonio Martinez, who was unarmed and asleep on the couch. An unidentified TCSO deputy fired a single shot that killed Martinez. The deputy is currently on administrative leave pending an investigation by both the TCSO and the Texas Rangers. The actual target of the raid, 28-year-old Antonio Alvarez, is in custody; Martinez was not a target. Back in February, 36-year-old TCSO Deputy Keith Ruiz was fatally shot while conducting a similar raid.

On Friday night, when the Ice Bats take on the San Antonio Iguanas at the Travis County Expo Center, half of the evening's proceeds will go to the family of APD Officer Clinton Hunter -- a 22-year-old husband and father killed in the line of duty on Nov. 29. Austin Police Association representatives will also be on hand to sell mugs, hats, and T-shirts stamped with their logo, with all proceeds going to the Hunter family. For more info, call the APA at 474-6993.

Last week Travis County District Court Judge Paul Davis reinstated the tax-exempt status of the Ethical Society of Austin, a humanistic religious organization that emphasizes freedom of conscience and individual dignity but follows no doctrines or supreme beings. The ruling has provided a new campaign for state comptroller and perennial grandstander Carole Keeton Rylander, who plans to appeal the court's decision because "anyone who dresses up and parades down Sixth Street on Halloween will be applying for an exemption." Replied the Ethical Society: "Contrary to America's democratic tradition of religious freedom, the State wishes to establish a definition of religion that is limited to the worship of a Supreme Being. ... this definition would deny religious status to many of the world's religions."

The Texas Natural Resources Conservation Commission has ordered Dow Chemical Co. to pay $433,388 in fines for multiple air pollution violations that occurred at the company's plant in Freeport between August 1999 and October 2000. Among the violations was Dow's failure to submit complete notifications for 29 "upsets" -- unexpected or unexplained release of emissions. 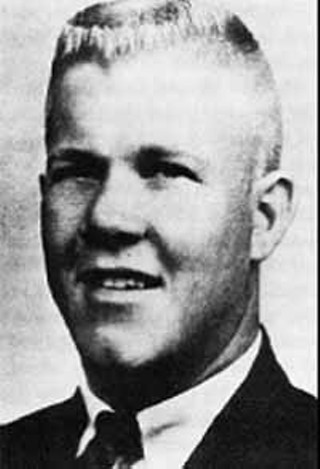 In other TNRCC news, the Commission will answer questions and accept formal public testimony on a proposal to require temporary rock crushers to comply with general provisions, as well as specific requirements, for controlling emissions from equipment and site activities. The hearing will take place Thursday, Jan. 3 at 6:30pm at the TNRCC state office building complex (Building C), Room 131 E, 12100 Park 35 Circle.

The Texas Workforce Commission announced that Austin's unemployment rate inched up in November to 5.4%. That's still lower than the U.S. average of 5.7%, but much higher than last December's seasonally adjusted rate of 3.7% -- the lowest monthly rate since January 1974. Back then, TWC officials were heralding "Texas' strong job growth." Those were the days ...

While signing a bill recently to reauthorize the Drug Free Communities Act and increase funding for anti-drug organizations from $50 million to $100 million by 2007, President George W. Bush linked American drug users to terrorists, the Drug Reform Coordination Network reports. "If you quit drugs, you join the fight against terror in America," Bush said, arguing that users aid pushers who benefit from black-market profits.

Another Washington, D.C.-based reform group, Common Sense for Drug Policy, has placed ads in national general interest magazines like the Weekly Standard opposing drug prohibition, which drives up costs to taxpayers, leads to over one million arrests, and creates the illicit black market. "Now We're in a Real War ... Isn't It Time to Abandon the War on Ourselves?" the ads ask. "Experience teaches: Prohibition fails." For more info, check out www.drcnet.org or www.csdp.org.

In an attempt to thwart identity theft, the Austin Police Dept. warns Austinites to shred pre-approved credit card applications, junk mail, and anything else that may display personal information. APD investigators have received reports of people rummaging through trashcans located near apartment complexes (though they may be ordinary dumpster-divers), and advises anyone who believes they have been a victim to file a report by calling 311, APD's non-emergency number.

The thoughtful elves at Southwestern Bell recently delivered new telephone books tastefully wrapped in brand-new plastic bags to Austin homes. Due to your old phonebooks' low paper grade, however, the city won't collect them for recycling. Drop off old Yellow (and White) at Randalls or HEB stores through mid-January to ensure they are composted, or call 800/953-4400.

Records related to the massacre committed by Charles Whitman from the UT Tower are now available for public view at the Austin History Center. On Aug. 1, 1966, Whitman climbed to the Tower's 27th floor and gunned down people on the campus -- killing 14 and wounding 31. In August 2000, the Center received the records from the Austin Police Dept. -- including Whitman's letters, diaries, and date books, and investigative reports. Manuscripts curator Rebecca Rich-Wulfmeyer said, "At a time when presidential records are becoming less accessible through Executive Order 13223, it is encouraging to see other records being available." The records can be viewed by calling the Austin History Center at 974-7480.

The Women's Advocacy Project, which operates a legal hotline for victims of domestic violence, is experiencing a financial crunch due to the economic downturn. Send donations to PO Box 833, Austin, TX, 78767.

This may surprise some "Naked City" readers, but Bill Aleshire, the outspoken, often-controversial former Travis County Judge, says he prefers a quiet life out of the spotlight. Aleshire left county government to pursue a law degree and now plies his trade at the law firm of Hill Gilstrap Riggs Adams and Graham. "I wish I had done this a long time ago," Aleshire said of his new life, "and I'm sure there's a lot of people in politics who would agree."