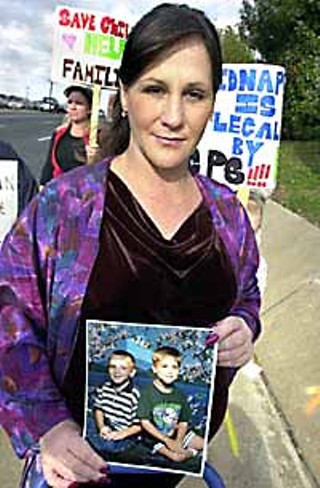 Robin Cash is on a mission: to win a battle against the state's Child Protective Services arm of the Department of Protective and Regulatory Services. The department, she charges, is doing more harm than good to Texas families and their children. "Don't get me wrong, we need CPS, there are children who are really abused," she said. "But there are also a lot of abuses in the system that need to be addressed." To Cash, those abuses include under-trained caseworkers, caseworkers lying in court documents, kids being sent to unqualified therapists, and parents who are railroaded into relinquishing their parental rights.

Two months ago Cash placed an ad in the Chronicle. "Do you feel CPS has hurt your family?" it read. "Do you have concerns about your children and the system?" Cash says she was overwhelmed by the response. "I got 1,000 e-mails in the first week." From that one ad arose a new parents advocacy group: Parents Get United, composed of parents who, like Cash, feel the CPS system is in need of reform. Through meeting with other parents, Cash said she has learned that her struggle with CPS is, unfortunately, not that unusual.

Cash's version of her own experience is harrowing. In January 2000, Cash told the Chronicle, she was trying to get herself and her two twin boys out of an abusive home. She asked her pastor to care for her kids while she got a protective order against her common-law husband. But before she could do so, Cash was arrested on charges filed by her husband -- who had gone to the police first, claiming she had hit him. Cash says her husband was already a two-time loser, potentially facing a long stint in jail as a result of their most recent fight. This time Cash had actually fought back. "So, he had to beat me to the paperwork," she said. Cash spent four days in jail, while her sister called CPS to see if there were any services they could provide to help Cash and her children get things together on their own.

According to Cash, instead of offering help, a CPS caseworker came to her pastor's house, told him Cash would be in jail for at least four months (although she was scheduled to be released that day), and took the kids into CPS custody. Cash began a protracted fight to get her kids back, she said, thus far to no avail. Her parental rights have since been taken away, and she hasn't seen her boys in months.

"If you don't think this is ripping my heart out ... I've got to do something," she said. In response to her Chronicle ad, Cash has been contacted by parents, lawyers, an investigator from the human rights commission, even a former CPS caseworker -- all agreeing that CPS needs taming. "This is a wide, sweeping problem across the country, and Texas has its share," said Chuck Ragland, a former CPS caseworker in Van Zandt County. "And we are seeing a groundswell of parents getting upset." Ragland spent eight years as a caseworker and says he saw so many problems with the system that he dedicated his last three years with CPS to "making a concerted effort to try and figure out exactly what is going on." What he saw, he says, was troubling: caseworkers falsifying documents and removing children from families for very little, if any, cause. "They feel like they are above the law because they are doing something noble," he said. "They think, we might make some mistakes, but so what?"

To Aaron Reed, CPS spokesman for the Central Texas region, the allegations are frustrating. "Mostly we get accused of not taking enough action," Reed said, citing two Central Texas child deaths in the past two weeks, in families where CPS had made contact but had not removed the children. Reed says the charges of caseworker misconduct and railroading of families are inaccurate. "There's a law against perjury," he said. "When a caseworker is sworn in [by the court], it is just as any other witness, they are bound by the law." Reed said the agency now uses a more proactive model of trying to assess at-risk families and take action before abuses occur, but he doesn't believe this leads to more mistakes by caseworkers. The agency tries to identify at-risk families by a host of objectives, he said, most notably by reviewing abuse- and neglect-related deaths. "We look at those to see what factors are common between them and identify behaviors that place families at risk," he said. "It's not perfect, but it's a better system and a fairly accurate system. If we err, we would prefer to err on the side of safety."

Reed estimates that in the 30-county Central Texas region, CPS removes from their homes about 100 children per month. During 2000, in Travis County alone, there were 1,653 CPS confirmed cases of child abuse or neglect, and CPS spent $13.8 million on foster care services. Numbers for 2001 will not be ready until next month, but the problem is not disappearing.

To Cash and Ragland, the agency's mistakes have gotten out of control, and they place some of the blame on the agency's "at-risk" focus. "A lot of the caseworkers are trained with the mindset that there are all these problem families, and they are out to get them," Ragland said. While Cash and Ragland agree that CPS serves a vital function, they believe the strong emphasis on at-risk situations -- largely found among low-income and minority families -- puts some healthy families, or families actively trying to better their situations, at an even bigger risk. Ragland adds that since federal grant funding has become increasingly tied to at-risk management in lower-income families, CPS's focus has become more of a funding necessity. "Listen to the storm," he said. "You'll see a pattern. Their responsibilities have become way too broad."

CPS's Reed and spokeswoman Marla Sheeley say the goal of the agency is to protect children and, in every possible situation, keep families together. "The first thing we do," said Sheeley, "is make every reasonable effort to keep children in the home or to return the child to the home."

Cash, Ragland, and the other parents and advocates involved in Parents Get United say they are in the fight for the long haul, and the group has been meeting with a group of state legislators interested in CPS reform. "They want to know what, really, the true issues are as a foundation for their work and what issues need to be added to legislation," said Ragland. "Really, for things to change, and to stop the corruption, the whole system really needs to be turned on its head."