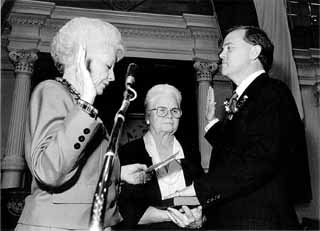 Glen Maxey is sworn into office in 1991 by then-Gov. Ann Richards. Holding the Bible is Maxey's mother, Mary. For more on Maxey, see "Capitol Chronicle." (Photo By Alan Pogue)

Bust out those strap-on antlers, and stick Rover in his glittery sweater for Saturday's Austin Humane Society/SPCA Santa photo-op. The annual event, which includes a blessing for animals, takes place from 11am-5pm at the Austin SPCA, 124 W. Anderson. For those celebrating a pet-less Christmas, the new, improved, 100% more patriotic Zilker Christmas tree has been lit and is ready for spinners of all ages.

There'll be waterworks a-plenty tonight (Thursday) at the Barton Springs Edwards Aquifer Conservation District. The BSEACD board is expected to weigh in on the biggest proposal ever to cross its desk -- a request by Creedmoor/ Maha Water Supply to pump 617 million gallons of water a year from the aquifer. Tonight's meeting is at 6pm at the district office, 1124-A Regal Row (just off Manchaca Road, south of Slaughter Lane).

After rejecting Lumbermen's Investment Corp.'s request to build a condo tower just north of Town Lake, the City Council will take up a related LIC matter -- this time in executive session at today's (Thursday) meeting. Today's matters concern access issues, namely reconfiguring Sandra Muraida Way -- a critical roadway that will figure prominently into both the LIC project and the Seaholm Power Plant's conversion for public use. Details were still hazy at press time, but parks advocate Mary Arnold, who led the opposition to the condo project, is suspicious of what could transpire behind closed doors. She'll show up early to corner every council member she can find before the meeting, she says.

Three neighborhood plans promise to dominate this week's City Council agenda. While re-zonings for Central East Austin (whose team was chaired by Chronicle City Editor Mike Clark-Madison) have so far provoked little controversy, the Dawson (South Austin) and Holly (Eastside) plans have generated more ire and drama than you ever thought zoning could. We suspect it isn't over yet.

After fighting cancer for four years, youngest Beatle George Harrison died on Nov. 29 at a friend's house in Los Angeles. He was 58. Our guitars gently weep.

Veteran Travis County prosecutor Chris Duggan announced Monday he is running for Bastrop Co. district attorney. Duggan, who has been with the county DA's office since 1995, had spent the previous five years at the county attorney's office. He hopes to replace Charles Penick, who announced his retirement in August. In 1998, Penick (along with Lisa Tanner, a special prosecutor from the state attorney general's office) had the dubious distinction of prosecuting Rodney Reed, subsequently convicted and sentenced to death for the 1996 murder of 19-year-old Stacey Stites -- the first capital murder trial in Bastrop County in more than 50 years. Penick has since come under attack from critics who charge that he and Tanner withheld possibly exculpatory evidence from Reed's defense attorneys.

KEYE-TV has eliminated the positions of general manager and program manager, as well as the station's business office -- a total of five jobs. The CBS-owned station will now be managed from faraway Tampa, Fla. In reporting the layoffs, the Austin American-Statesman noted that KEYE's newscasts "have finished an embarrassing fifth, behind sitcom reruns on KNVA." Newly appointed Station Manager J.C. Lowe blamed the firings on the recession, not the dismal ratings. "We feel we've got a good news product," Lowe said. "Is it a performance issue? No ... It really is more of an economic situation." Personal message to J.C.: It's a performance issue, too.

In its weekly national newsletter (available at www.drcnet.org), the Drug Reform Coordination Network has posted an Austin Police Dept. letter to local club owners outlining its feelings on the rave scene ("... nothing more than a haven for drug dealers and drug use," wrote APD Commander Roger Dahlstrom). Meanwhile, last week federal law enforcement agents and prosecutors lost a major "crack house" case against the owners of a Panama City Beach, Fla., rave hotspot, whom they had charged with conspiring to use the club (or allowing it to be used) for distributing drugs. After six weeks of hearing testimony, jurors took less than 75 minutes to reach a not-guilty verdict on all counts, DRCNet reports. In recent years, federal law enforcement agents have touted the 1986 federal Crack House Law (which allows for federal seizure of buildings where habitual drug use or drug sales take place) as an effective method of reducing drug use and sales at clubs that sponsor raves (see The Agony of the Ecstasy, Nov. 11, 2001).

Last Christmas season, she helped fast-track the presidential election in favor of George W. Bush and emerged victorious. Now, The Wall Street Journal reports that Florida Secretary of State Katherine Harris is working harder than a Santa's elf as a lobbyist for fast-track trade legislation. If passed by the House today (Thursday), fast-track would allow the Bush administration to negotiate international trade agreements that Congress -- limited to an advisory role -- couldn't amend. How's that for democratic process? A green-and-blue coalition has vigorously opposed fast-track, which does not require trade agreements to address environmental standards or workers' rights.