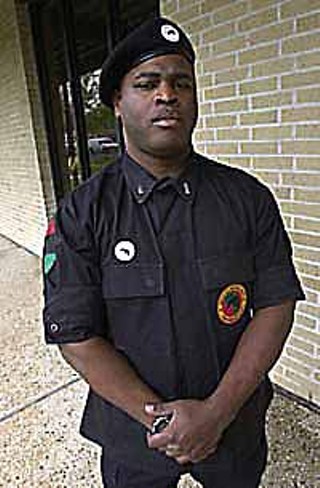 The New Black Panthers have come to Austin.

In keeping with the original Black Panther Party's tradition of community service, members of the newly formed Austin chapter of the New Black Panther Party for Self-Defense spent Thanksgiving distributing turkeys and food baskets to needy families. Some of the turkeys were donated, but local chapter Chairman Anthony Walker says that he spent $2,700 of his own for the occasion. "People want to see action," said Walker, who joined the party last year. "In the future, it's going to get a lot better."

The Austin chapter started recruiting six months ago, Walker says, and has enlisted more than 60 members (mostly men) including students from Huston-Tillotson and UT. Membership is free and growing rapidly, with meetings held two or three times a month at University Hills Library. "We've never talked about having members of other races, but we're open to working with strong coalitions," Walker said. Like the original Party, New Black Panthers tackle institutionalized problems such as hunger, housing needs, and discrimination -- and more contemporary issues such as the death penalty and racial profiling -- while espousing black empowerment and self-sufficiency.

The Panthers' emphasis on personal responsibility might appeal to conservative politicians. During outreach efforts, for instance, members encourage non-members to overcome reliance on governmental assistance. Fathers must serve as positive role models to their children. Drug abuse and criminal activity results in automatic suspension. Members must perform regular community service and wear their uniforms at least once a month, Walker says. "You try to stand out so people can see you." Some stand out even further by occasionally brandishing arms in public, a practice developed by the original Panthers as a defense against abuse and harassment of blacks by whites and police. "If we go to a protest empty-handed, we're at a disadvantage," Walker explained. "Police have guns and tear gas."

The Austin chapter is laying groundwork for chapters in San Antonio, Bastrop, and Round Rock. Despite obstacles to recruiting young kids -- "they're more materialistic, not as interested in values" -- Walker says the Party is generating a positive response from older youth and adults. Alli Aweusi, a local historian, author, and artist who helped found the original Panther chapter in Oakland, Calif., and now sits on the council of the Austin chapter, says Walker's message and community service attracted him. "I always say to people, I'm still a Panther," says Aweusi, who is writing a book about the day-to-day life of the original party -- from the breakfast programs to the highly publicized confrontations with police. "Panthers believe in helping our communities in any way we can, whatever the problem may be."

As a child growing up in the projects of Shreveport, La., Walker learned about the Panthers when the local chapter delivered a food basket to his family. A former drill instructor for the U.S. Army, Walker says he didn't become an activist until moving to Austin. He sensed disunity among blacks -- as wells as a lack of responsiveness among politicians and "so-called black leaders," who he says have abandoned door-to-door outreach and have a minimal presence in local black neighborhoods. When he asked black people about the last time they'd heard from their political representatives, "they couldn't remember." At the Huntsville funeral for James Byrd Jr., he met then-national leader Khalid Muhammad but didn't join until after attending last year's protest in Huntsville against Gary Graham's execution. Introduced to Houston chapter leader/national Minister of Information Quanell X, Walker began attending Houston meetings. According to Quanell X, although Walker is now a chapter chairman, he still has some "initial stages" to go through.

Despite the good works, the Party has developed a negative public image since its founding in 1990, due in large part to political invective by Muhammad (who died in February) and his successor, Malik Zulu Shabazz, based in D.C. Muhammad was nationally notorious for harangues against Jews, and Shabazz has earned his own reputation as a racist demagogue. The Southern Poverty Law Center, a civil-rights litigation group, monitors the New Black Panther Party as a hate group.

For his part, Walker steers clear of hateful rhetoric. "Certain people can make a statement within our movement that can make everyone look bad," he said. "Later on, you'll probably see changes." Informed of Walker's comments, however, Quanell X responded, "Brother Anthony has not studied enough. That's why we have a national spokesman, to make statements and [give] clarity." Quanell X said he does not condone anti-Semitism, but added, "Jewish Zionism is not a religion but a political philosophy."

"If you're part of an organization, there has to be some consistency of thought," observed National Association of the Advancement of Colored People -- Austin Chapter President Nelson Linder. "You can't have 30 different people in 30 different cities saying different things. You're not going to be taken seriously." He adds that Quanell X and the Houston chapter have raised the profile of police brutality, racial profiling, and other forms of injustice statewide. Since its founding in 1998, the Houston chapter has regularly held demos, appeared at court on behalf of plaintiffs charging job discrimination, and recently testified in defense of a Houston charter school for at-risk youth.

Walker hopes to bring that spirit of grassroots activism to Austin's black community, he says. For Christmas, the Austin chapter plans to distribute shoes to young children. "If our government was attacking these problems like they're attacking terrorism," he said, "we could get a lot of things done."