As chair of the failed Senate Redistricting Committee, GOP Sen. Jeff Wentworth was overruled and humiliated by his GOP colleagues. It should be some comfort that he gets his ultimate wish: His own D. 25, which formerly included part-but-not-all of more than a dozen counties, is now remarkably compact, and people in Travis, Hays, and Williamson Counties no longer need a street map to figure out who their senator is.

Except for Jim Hightower! Austin's lefty stalwart, who lives in the equally lefty Travis Heights, now lives in Wentworth's district, as do most of the hippies in the 78704 ZIP code. But Hightower's good friend and colleague Molly Ivins, who lives only a few blocks south in Travis Heights, is still represented by Democrat Gonzalo Barrientos. Who thought this was a good idea? Probably not Wentworth, and certainly not Barrientos. Blame instead the cabal of John Cornyn, David Dewhurst, and Rylander, who imposed their wacky plans for redistricting when Wentworth's horse got shot out from under him in the Lege. Since Rylander presumably knows where these places are, perversity is the only logical answer. 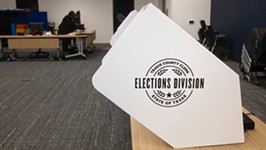 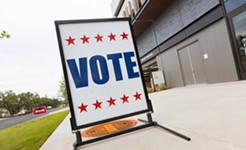 May 1 Special Election Early Voting Results Are In
Big lead for Prop B, even bigger deficit for Prop F