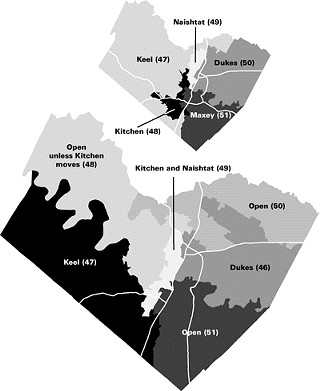 Despite local carping about how the Travis County Dems got screwed in redistricting, the new six-district House map is pretty much what a schoolchild would have drawn if given the task. The only geographic anomaly is the new District 46's foray north into Pflugerville -- that to ensure that Rep. Dawnna Dukes still lives in her majority-black district. Otherwise, the map reflects the way the Chronicle typically breaks down city and county election returns -- central (D. 49, Naishtat), east (D. 46, Dukes), north (the open D. 50), southwest (D. 47, Keel), southeast (D. 51, vacated by Maxey), and northwest (D. 48, where relocated incumbent Ann Kitchen should face County Commissioner Todd Baxter).

Besides, for all the hype about the county now having a 50-50 Dem-GOP split, it's not clear that either the new D. 48 or D. 50 will automatically go Republican. Kitchen doesn't seem to think so (she's running), and the Texas Legislative Council may back her up. One of the benchmarks the TLC uses to define a district's party slant is how it split in the 1998 state comptroller's race, the closest contest on that ballot. Even though the eventual GOP winner, Carole Rylander, is actually from Austin, neither the new D. 48 nor D. 50 voted for her.