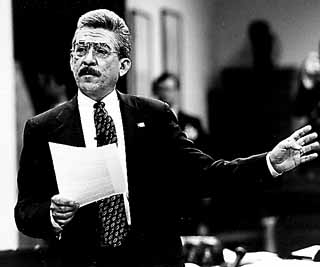 Longtime State Sen. Gonzalo Barrientos, D-Austin, pled no contest Tuesday before Travis County Judge David Crain to one count of Driving While Intoxicated, a Class B misdemeanor. His penalty: one year of probation, one year of counseling, 40 hours of community service (still unassigned), a $500 fine ($1,500 was also probated), and a 90-day license suspension (as opposed to the 60-day suspension he would've faced had he consented to take a Breathalyzer test). At a Tuesday morning press conference at the Capitol, a solemn, apologetic Barrientos told reporters he owed both family and constituents an explanation. "I exercised poor judgement," he said. "If I was not absolutely sure that I was fit to drive, I shouldn't have gotten behind the wheel."

Shortly after midnight on Nov. 21, an Austin Police Dept. officer arrested Barrientos, who was heading south on Congress near Riverside. Earlier, Barrientos said he had consumed three or four beers total during after-work meetings at the Four Seasons and the Cloak Room, a common hangout for legislators. He refused the Breathalyzer, he says, because he was nervous. "It was a spur of the moment decision," he said. "I had a choice, I made a choice, and I don't know if I would make the same choice today."

The arresting officer took Barrientos to the Travis Co. Jail; he was released shortly after 4am to his lawyer, Bill Fitzgerald. At Tuesday's conference, Fitzgerald said the Senator was not afforded special treatment of any kind: "I can promise you that he wasn't." This wasn't the first time Fitzgerald had gotten up in the middle of the night to spring a client from jail, he said. Nor was this the first time the court permitted a public official to be released into his or her lawyer's custody, thanks to the so-called "Hobby Rule." In the Sixties, when former Lt. Gov. Bill Hobby was arrested in Austin for a DWI, a Travis County judge ruled that he could be released into the custody of his lawyer instead of languishing in jail until posting bond. "And then, what was good for the goose became good for the gander," said Travis Co. Sheriff's Office spokesman Roger Wade.

Despite years of involvement in anti-Vietnam War demonstrations, Barrientos had never before faced arrest, he said. He pled no contest because he hadn't been certain of his innocence and urged others to think twice before getting behind the wheel after imbibing. "Even if you have an inkling of a doubt, don't do it," he said. "It's not worth it. You will be charged, you will be caught."