Dewhurst's Terrorists: The CIA Experience of the Director of "Homeland Security" 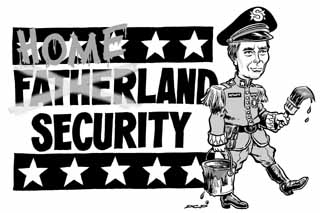 Everybody got a big laugh this month when Land Commissioner David Dewhurst, trying to jump start his campaign for lieutenant governor, advertised his recent appointment as director of the new state Task Force on Homeland Security in Texas Monthly -- and unwittingly featured in his ad a German Luftwaffe officer standing in front of an American flag. The columnists are still poking fun at Dewhurst's mistake. "Great, our Homeland Security czar can't even recognize a foreign soldier in uniform in his own ad," wrote Molly Ivins. "Hard to believe a terrorist might slip past him."

It's a good gag, although nobody has yet pointed out the uncanny connection between Dewhurst's gaffe and the credentials that got him his new job. When Gov. Rick Perry appointed Dewhurst to head the task force, he cited the commissioner's experience as an Air Force officer and in "intelligence" -- referring obliquely to Dewhurst's stint as a Central Intelligence Agency case officer in Bolivia, from 1970-73. Dewhurst himself wasn't quite so vague. The day before Perry announced the appointment (rumored to be a reward for Dewhurst staying out of the GOP Senate race against AG John Cornyn), Dewhurst tipped the Houston Chronicle, adding that (as the Chronicle put it) he had "some experience with terrorists as a CIA agent in South America in the early 1970s." The reporters weren't quick enough to ask: Was that experience with terrorists on behalf of terrorism, or against it?

Just in case you've lost your handy itemized list of CIA-backed insurrections in South America, in 1971 -- when David Dewhurst was (as he told me this week) "a 26-year-old CIA case officer assigned to the U.S. embassy in La Paz" -- Bolivian Gen. Hugo Banzer Suárez carried out a successful military coup against the elected government of Gen. Juan José Torres. (Torres had nationalized the mineral holdings of Gulf Oil and done other things that offended the U.S. government.) Banzer received (unofficially, of course) both CIA and U.S. Air Force support in the coup -- not surprisingly, since he was trained at Fort Hunt and the notorious U.S. School of the Americas. The general quickly took the kind of actions for which SOA graduates are so renowned, as summarized recently in Whiteout, Alexander Cockburn and Jeffrey St. Clair's book on the CIA: "Even in Bolivia, the overthrow of the Torres government became known for its extreme violence and the lengths the new regime took to eradicate leftist elements in the country. Universities were shut down as 'hotbeds' of radicalism, tin miners were once again violently suppressed, more than 3,000 leftists and union organizers were hauled in for interrogations and 'disappeared.'"

Of course, by the dismal standards of CIA-sustained regimes like Somoza's Nicaragua or United Fruit's Guatemala, Banzer's 1971-78 dictatorship was rather small beer. To paraphrase Mercutio, it did suffice. In addition to the CIA, Banzer had other helpful cronies -- most notably Klaus Barbie, the notorious Gestapo "Butcher of Lyons," spirited out of France and into Bolivia by the U.S. in 1951. Over the years Barbie provided regular "intelligence" and other assistance to the CIA and was particularly useful to the Banzer government. According to a Bolivian government report, he provided advice on "how to adapt the military effectively for internal repression rather than external aggression. ... The system of concentration camps [developed by Barbie] became standard for important military and political prisoners." The report also recounts Barbie's helpful counsel to the secret police in methods of interrogation, including professionally supervised electrical torture designed to extract the maximum amount of information before the subject expired.

I wanted to ask David Dewhurst if that is what he meant when he told reporters of his experience with terrorism, and if perhaps he had occasionally even run into Barbie the Butcher (under the name "Altmann") at the embassy bar. Before I could do so, he declared, "I never comment on intelligence matters," and pointed instead to his 1994-96 service on a presidential commission to "restructure the intelligence community." (In light of the recent U.S. intelligence record, the commissioner might be well advised not to overplay that credential either.) Of his experience in the CIA, Dewhurst would say only, "I have an understanding and background in certain aspects of terrorist activities."

What Did You Do in the War, David?

So I asked Commissioner Dewhurst instead to venture an opinion on the record of the Banzer government. I wanted to allow him the opportunity to distance himself from a military dictatorship notorious for its corruption, for its murderous suppression of liberationist missionaries ("the Banzer plan"), and for its direct and extensive involvement in the international cocaine trade, since it became during this period the primary supplier of the newly-formed Colombian drug cartels.

Dewhurst was reluctant to comment on the nature of the Banzer regime and said only: "The Banzer government replaced the Torres government, which was considered a thorn in the side of the U.S. I left Bolivia in 1973. I have no informed opinion of President Banzer's [administration], other than that during the late 1970s, the U.S. State Department and international banking interests applauded Bolivia's strengthening economy. That apparent accomplishment has been clouded by numerous and repeated allegations of human rights violations."

For three years -- years preceding and spanning the Banzer coup (or to use his term, the Banzer "replacement") -- young David Dewhurst was a CIA "case officer" in Bolivia. According to William Safire's helpful column in Monday's New York Times, the experts (quoting Edward Jay Epstein) describe a case officer as "not merely an agent. An agent executes assignments, but a case officer serves as the intermediary between an agent and the state intelligence service controlling that agent."

It would be useful for Texans to know what the former CIA case officer and now director of Homeland Defense Task Force considers the experienced way to combat "terrorism," and indeed whether he can recognize the real "terrorists" any better than he can recognize a German uniform. It would be especially helpful if, on the campaign trail for lieutenant governor, David Dewhurst might some time tell us what a former CIA officer -- who (in whatever youthful capacity) helped install and sustain a brutal and corrupt military dictatorship in another country and who even now continues to legitimize and defend that dictatorship -- could possibly know about the actual practice of free and democratic government.