Are diseased elk imported to Texas a threat to Texas wildlife? 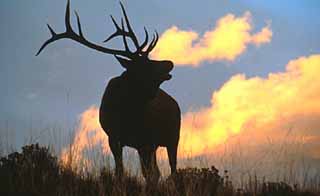 Eleven elk were recently imported to private ranches in Texas from a Colorado game farm that has reported a number of animals suffering from Chronic Wasting Disease -- and that news has cast a pall on hunting season, which opened on Saturday, Nov. 2. Two of the suspect elk have already been killed, and five others were sold to out-of-state operations, leaving four of 11 elk quarantined and awaiting testing. State wildlife officials are still negotiating with ranch owners in the Panhandle to take control of the few elk that remain alive and in the state.

Meanwhile, more than 1,300 elk at the Elk Echo Ranch in Colorado, where most of the suspect animals originated, will be destroyed and tested for CWD. An additional bull elk brought to Central Texas is believed to have been exposed to diseased animals at a separate Colorado elk farm, which also received animals from Elk Echo.

Over the past few years, elk ranches across the country have seen a rise in the number of reported instances of CWD, a fatal disease related to Mad Cow Disease that causes elk and deer to lose weight, slobber, and act strangely. The elk ranches either provide "canned hunts," breed the animals for meat or to sell to other ranchers, or in some cases harvest their antlers, which are used in Asian medicine and are considered quite valuable. The elk themselves can cost as much as $20,000 for a top-of-the-line stud. In states such as Montana and Idaho, which have large populations of indigenous elk, instances of CWD have sparked a nasty debate over outlawing such operations, with wildlife advocates arguing that elk and deer farms should be shut down.

Deer are susceptible to CWD as well -- which raises significant concerns in Texas, where there are very few, if any, wild elk. To date, Texas has not documented a case of CWD in any of its ungulate populations, but Texas Parks & Wildlife Dept. staffers and members of the Texas Animal Health Commission say they remain alert. The hunting industry annually adds an estimated $220 million to the state economy, and as for CWD, TPWD official Jerry Cooke says: "We don't have it; we don't want it; and we're not going to play any games with it."

The state's main line of defense is a year-old voluntary certification program for deer, elk, and related ungulates that requires game farmers to regularly test their herds for CWD, as well as for tuberculosis and brucellosis. Under the state program, game farmers must also account for all animals on their farms older than 16 months. And in order to maintain their state certification, they can only "buy in" elk and deer from ranches that maintain the same or higher standards under their state's own supervision. The North American Elk Breeders Association has 58 farms and 2,100 animals registered in the state of Texas.

"The folks from Texas did everything right," says Dr. Ken Waldrup, a veterinarian with the state Animal Health Commission. "These animals were not smuggled into the state. Their owners have been very cooperative." Although some people regard game farms as breeding grounds for diseases such as CWD, Waldrup says he believes Texans still don't have much to worry about when it comes to the disease. The multi-agency effort to protect Texas wildlife, he says, should be adequate to keep the state CWD-free and to protect hunters. "Yes, there's the negative that we have these animals that were brought into the state, but we have a handle on it."

In the meantime, Cooke reiterates the advice TPW issues annually to hunters: "Every animal has a history that's unknown to you. So we recommend wearing rubber gloves to clean your kill and cooking your meat thoroughly -- just the same as we've been recommending for 20 years." There is no way to test live animals for CWD.