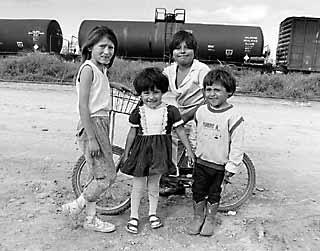 Ten years ago, health-care workers in Brownsville discovered a disturbing trend: High rates of children born at the Community Health Clinic with a rare condition called anencephaly: a fatal birth defect marked by the inability of the fetus to develop a skull or brain. Three babies suffering from anencephaly had been born during a matter of hours, and during the following weeks several more infants were born likewise lacking skulls or fully developed brain tissue. At the time, the Texas Dept. of Health and federal officials were at a loss concerning a response. Before 1993 -- despite widespread concerns over petrochemical processing, pesticides manufacturing, and other potentially harmful industrial activities across the state -- a system for monitoring birth defects didn't even exist in Texas. In the Lower Rio Grande Valley, determining what was causing anencephaly turned out to be the first hurdle in preventing its recurrence.

Currently, the debate continues over the reasons for the first dramatic outbreak of anencephaly, as well as similar patterns of birth defects that have followed throughout the Lower Rio Grande Valley. In addition to anencephaly, the region has continued to see clusters of related birth defects known as "neural tube defects" -- including spina bifida, a spinal cord affliction, and encephalocele, a generally fatal developmental disorder that leaves portions of the brain exposed through a hole in the skull. As the problem persists, some local health officials and environmentalists blame pollution from the factories known as maquiladoras operating along Texas' border with Mexico. Heavy pesticide use in this largely agricultural region is also a potential culprit. Industry leaders and state officials say there's not enough specific evidence to link industrial waste and the disturbing rates of birth defects that persist in South Texas -- although, in a recurrent state tradition until 1993, the TDH and the Legislature resisted authorizing and funding the scientific research that could provide such evidence.

But in recent months, a study involving not human infants but frogs has emerged as an unexpected source of information, potentially documenting how pollution can lead to birth defects. For close to 17 years, Douglas Fort at Oklahoma State University has examined amphibian development and the impact of various contaminants and toxins on the ability of frogs to metamorphose from tadpoles into adults. While he is careful to point out that human embryo development is substantially different from that of amphibians, Fort believes that his federally funded work may hold a few clues as to why so many sick children are being born in the Lower Rio Grande Valley. It turns out that by exposing frogs and tadpoles in his Oklahoma lab to water and sediment obtained from the Rio Grande, Fort has been able to create developmental deficiencies in amphibians similar to the neural tube defects found in human newborns. Says Fort, "We're attempting to identify contaminants, whether they are manmade or naturally occurring, and determine what their role might be in this process."

Looking for the Poisons

Previous studies have thus far proved inconclusive. In 1991, recognizing the apparent birth defect problem in Brownsville, a handful of community activists, medical professionals, and environmentalists gathered what information they could and concluded that maquiladoras and pesticides were among the major concerns. Meanwhile, after enabling legislation was passed in 1993, the state has spent the past few years setting up the Texas Birth Defects Monitoring Division ( www.tdh.state.tx.us/tbdmd/index.htm), and public health officials in the Valley have headed an aggressive public health campaign focusing on diet and prenatal care among the region's poorer communities.

But babies with birth defects continue to be born at a distressing rate, suggesting that something is still amiss in the region. The TBDMD reported earlier this year that another seven newborns in the city of Laredo had been born with anencephaly; according to the state, this represents a "statistically significant" rate of 26.7 defects per 10,000 births. "There's certainly enough information about potential contaminants that we feel we should be looking at the issue," Fort said. 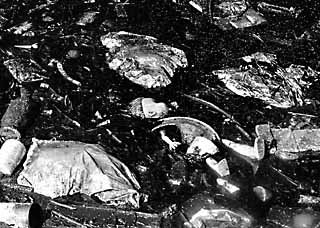 Canals in Matamoros are essentially open sewers, draining rainwater but also untreated human waste from colonias and industrial waste from maquiladoras, including chemical and pesticide plants. Sewage treatment is rare to nonexistent, and the water eventually flows to the Rio Grande or to a bay south of Matamoros. (Photo By Alan Pogue)

"We've been taking samples all the way from the Santa Ana National Wildlife Refuge to Boca Chica [where the Rio Grande meets the Gulf of Mexico, a distance of nearly 200 river miles]," he continued. One of the indications that amphibian models could be useful in studying the effects of pollution on human embryos, Fort says, is that he has been able to create syndromes that mimic the dietary deficiencies that have been otherwise blamed for birth defects. (Fort's work is being conducted with help from the National Institute of Environmental Health Sciences.)

Not everybody in the Valley views Fort's approach as the correct one. Among those who believe industrial development has been wrongly turned into a scapegoat by activists is Mike Allen, the president of the McAllen Economic Development Corporation, a nonprofit that works with the city of McAllen to attract new business to the region. "There's very little credible evidence that the maquiladoras are doing anything to harm the environment," says Allen who, in an apparently common confusion, refers to anencephaly as "encephalitis," an unrelated mosquito-borne illness. Allen says specific factories have never been tied directly to pollution conclusively believed to cause neural tube defects. "We all have to live here, and there's a need to be vigilant," Allen says. "But they never provide specific information about problems with a specific plant ... All we're saying is, where's the proof? We need to make sure to look at the facts."

Dr. Carmen Rocco, a pediatrician and the former medical director of the Brownsville Clinic, was in charge there during the first outbreak of anencephaly in 1991. Rocco maintains that the main culprit is the maquiladora industry, which has been thriving along the U.S.-Mexico border since the passage of the North America Free Trade Agreement in 1994. Having directed a community-based study that predated the state's efforts to track the rise in birth defects, Rocco points to new reports of increased levels of chlorine byproducts in municipal water supplies -- chemicals known to contribute to neural cord defects -- as evidence that environmental factors must be accounted for in prevention efforts. "They have looked at many factors, but I'm still not satisfied," she said. "Our population has a high risk that we still don't totally understand. Most of the studies so far have been inconclusive, but we still think it's very important to look at how the maquiladoras and pesticides are impacting our air and water quality."

Texas Dept. of Health spokeswoman Amy Case agrees that environmental factors, including pollution, must be studied if the state is going to put an end to the crisis. But it's hard to lay the blame at any one factory, or even industry. Case says the clusters of birth defects along the border indicate, most likely, that a combination of factors are at work. In addition to looking at common environmental stressors, such as pollution, the state has been studying secondary issues, including various molds, and other health issues, such as obesity and diabetes, to establish if such factors might be contributing to the birth defect patterns. "Historically, there have been higher rates along the Rio Grande Valley," Case says. "We have ongoing collaborations and studies looking at why that is. Clearly, there remain issues that need addressing."