How Few Can We Be? 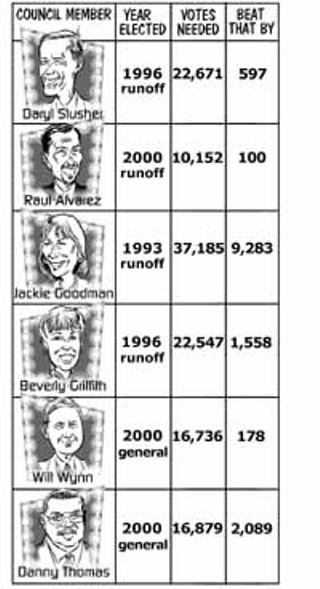 Illustration By Doug Potter
How many registered voters will actually go to the polls November 6? Would 4% be too generous?

That was the turnout in the last city election, which admittedly was a run-off for only one race (between Raul Alvarez and Rafael Quintanilla). That 4% translated to 20,303 votes out of 513,072 registered voters so it took 10,152 votes to win, a number Alvarez bested by exactly 100 votes.

Turnout for next week's special election is likewise expected to be abysmal. But let's speculate that a whopping 25,000 city residents (roughly the population of one ZIP code) will vote on (or before) Nov. 6, it being a mayoral race and all. If Gus Garcia does as well as Kirk Watson did last year, and gets 84% of the vote, he would have earned 21,000 votes to bring him back to the dais. That's less than Daryl Slusher got (25,218 votes) in losing to Bruce Todd in the 1994 mayoral run-off. Garcia himself earned 27,498 votes when he was elected to the council over Gilbert Martinez in 1991. Both that race and the Slusher-Todd contest were decided by less than one percentage point.

Even if the homeless-cross-dresser and cranky-old-man vote turns out in record numbers and trims Garcia's margin of presumed victory next week, Gus would only need 12,501 votes, if our prediction is valid, to win. Since 1967 the first time more than 25,000 people voted in an Austin City Council election (a 46% turnout at the time) the 12,501-vote threshold was crossed, not only by eventually successful candidates like Slusher, but by 51 people who never made it to the dais. Martinez did it in three separate elections and three run-offs, and Becky Motal did it in two elections and run-offs.

That list of 51 might-have-beens includes people who were elected to other offices, either previously or subsequently, including Willie Kocurek, Marcos de Leon, and Ron Davis, as well as famous names-around-town like Wick Fowler, Bertha Means, Marvin Griffin, Bette Mayfield, Mike McHone, Shyra Darr, Ginny Ballard, Susan Toomey Frost, Mark Tschurr, Mary Arnold, and (most recently) Manuel Zuniga. It doesn't include any of our perennial-candidate eccentrics, although 'Crazy' Carl Hickerson-Bull came very, very close to making the cut, with 12,203 votes in 1979.

By the way, the most people ever to vote in an Austin City Council election was 104,285 in 1993: the SOS-swelled election that brought Jackie Goodman and Brigid Shea into office. Ten years earlier, in 1983, John Trevino won re-election with 59,905 votes, the most ever received by a City Council candidate. Council Recap: Hey, Remember That Thing We Asked You to Do?
City Council revisits resilience hubs and Rainey Street density