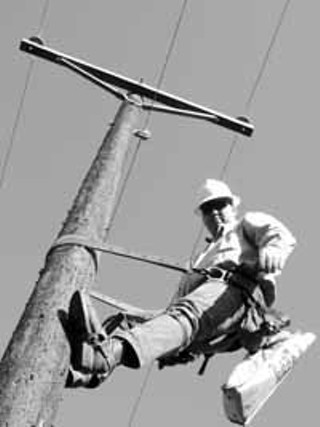 Lineman Ed Hurta, who is 6 feet 6 inches tall and weighs 305 pounds, has dropped about 35 lbs. since Reliant issued its new policy -- yet is still considered overweight. (Photo By Deron Neblett)

Lose It or Leave, Says Reliant

A move by Houston-based power producers Reliant/HL&P to enforce weight restriction guidelines on its employees has drawn much heat from the International Brotherhood of Electrical Workers (Local 66), the union representing workers affected by the deal. IBEW Business Representative Rick Childers says Reliant has offered a pretty icky ultimatum to workers weighing more than 280 lbs. in their work clothes and boots. The employees, Reliant has proposed, can either take 30 days' unpaid leave, attempt to reach the 280-pound threshold and, if unsuccessful, be terminated, or take an $8 to $9 pay reduction for 12 months, lose the weight, and, if unsuccessful by Nov. 1, 2002, face additional pay reductions or be terminated.

Workers who pick option No. 2 would have to relinquish their right to file grievances against the company, Childers said. They would also be demoted to "transitional helper." Some of the affected workers are crew leaders with 25 years of experience. "It's a humiliating, degrading title," Childers said, estimating that the new guidelines affect a minimum of 24 workers and possibly more.

Reliant spokeswoman Leticia Lowe says the weight restrictions are imposed by equipment and truck manufacturers and are intended to protect workers' safety. However, employees are using the equipment now without problems. Will workers who can't lose the weight receive job placement assistance? "I'm sure that will happen," she said, adding that Reliant's intranet site posts a variety of jobs. "I haven't looked at it personally," she admits. When pressed by "Naked City" for names of equipment manufacturers, Lowe became agitated and simply repeated her initial statement.

"[Reliant] has always known the manufacturers' rated capacity of those trucks," said Childers, who worked as a lineman for Reliant from 1969 to 1997 and is on temporary leave to serve the union. "We have always had guys over 300 lbs. ... They've never stopped it until all of a sudden, when they think it's a bad thing." Citing potential health risks caused by excessively rapid weight loss, he says IBEW asked the company to grandfather employees who weigh 280-plus. "I've got guys who are six-six, 350 lbs., who are probably not overweight at all. But heavy people are discriminated against all the time."

Reliant's motivation might be to reduce the budget by slimming down its employee base, Childers added, expressing concern that power companies elsewhere in Texas could impose similar rules to whittle down their staffs. Meanwhile, at least 540 IBEW members have filed grievances with the National Labor Relations Board, claiming that Reliant failed to negotiate in good faith with the union concerning the weight requirements.