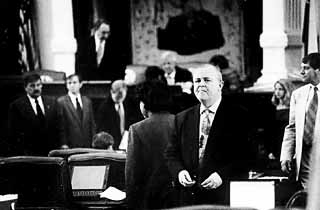 Thought the issue of whether or not organized prayer is allowed in public schools was settled long ago? Not at the Governor's Mansion. On Oct. 18, during an East Texas swing through the city of Palestine, Gov. Rick Perry Amen-ed along with second-period students at Palestine Middle School during an organized, Christian-centered class time prayer session in the school's gymnasium. According to the Austin American-Statesman, state Sen. Todd Staples (not school officials) organized the prayer.

Maybe Staples isn't up on the text of the ol' U.S. Constitution, or any of the various rulings on this topic by the U.S. Supreme Court over the past 60 years. Either way, Perry's organized prayer was a pretty obvious violation of both constitutional and case law. According to the Supremes, it is legal for children to choose personal prayers while in school, but it is not legal to organize mandatory prayer sessions during the school day.

Perry told the Statesman (a) those upset about a single-faith prayer session should just "be tolerant"; (b) everyone prays to the "same God anyway"; (c) he is ready and willing to make school prayer a campaign issue; and (d) the type of prayer offered in public schools should be a "majority-rule situation." Perry's spokespeople did not return calls requesting elaboration, but the Guv was a bit more loose-lipped when the Statesman asked if he actually intended to make school prayer a campaign issue. "Sure. Absolutely. I mean, who is going to be against that?" he asked. As for the legal issue, that church and state remain constitutionally separate? "They took it out, they can put it back in," Perry said.

Perry's reborn religiosity could be aimed at securing more of born-again tycoon James Leininger's millions for his campaign -- or maybe he's just a choir boy. Meanwhile, millionaire Dem candidate Tony Sanchez stands squarely on both sides of the prayer issue. "His position is that children should not be forced to leave their faith at the school house door," said spokesman Glen Smith. "But you sure have to guard against [students] being coerced, embarrassed, or alienated [by any kind of school prayer]. To find a way to do that ... We're not sure there is a way to do that for now."