The Other Kirk Watch 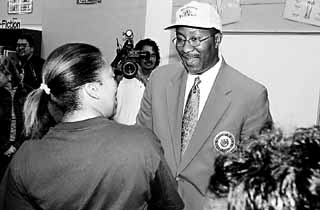 The other Mayor Kirk -- Austin homeboy Ron Kirk, now of Dallas -- passed through town last Friday to pick up Distinguished Alumnus awards at UT and Blackshear Elementary and to network for his pending run at Phil Gramm's Senate seat. "Naked City" caught up with Kirk at Blackshear, where he listened to a student presentation and delivered a homily on The Lion King. (Blackshear students should recall, Kirk said, what King Mufasa told Simba: "You are destined to become kings or queens.")

All-but-announced Kirk said his exploratory committee is receiving a warm reception around the state, and that he expects to have a formal announcement by the second week of November. During his campaign, Kirk said, he plans to emphasize investment in public education, and "redefining excellence" -- including the state's ability to educate an increasingly diverse population. Kirk described his own mayoral legacy as making Dallas politics less oppositional and confrontational, thereby redefining political progress at the City Council. "Dallas had lost its way politically and culturally, and we were able to set a new tone concerning how government works -- to do the things the public wants to get done," he said.

But earlier this month, one of Kirk's major public works-in-progress, the Trinity River project of inner-city highways, development, and (in theory) flood control, received harsh criticism when the U.S. Office of Management and Budget (OMB) wrote the secretary of the Army to say the Army Corps of Engineers' project was both too expensive and counterproductive. In fact, OMB said, the project may actually worsen the neighborhood flooding it was originally intended to halt.

Kirk called the OMB's letter "outrageous and outlandish" and said the agency was exceeding its authority by attempting to "veto" a project endorsed by the voters and (if Kirk has his way) soon to be approved by Congress. "The fact that the OMB leaked its letter to groups whose sole mission has been to block this project and the redevelopment it represents calls into question the integrity of the agency's entire review process," Kirk said. He declined to respond to the substance of the OMB's charges.

Amidst the pleasantries, Kirk leaked a little political information of his own, when he introduced Maria Luisa "Lulu-- Flores as the presumptive successor to Austin state Rep. Glen Maxey, who, Kirk said, has decided to retire. Flores -- whom Maxey defeated in the 51st District Democratic primary 10 years ago and who is now an attorney with the Railroad Commission -- was audibly abashed at Kirk's declaration. To her knowledge, Flores said, Maxey has made no final decision. Should he retire, however, she is ready to run. Flores pleaded, "Please don't write that I announced."

Contacted by "Naked City," Maxey said that he is still hanging fire, waiting on redistricting and the related court cases "to find out where I might have to live. There's clearly a possibility I will retire," he said, "and I have told folks who may be interested -- that includes Lulu Flores and Eddie Rodriguez [Maxey's legislative aide and executive director of the Travis Co. Democratic Club] -- that they should be ready, and I will give them fair warning. I understand they're both actively working." Rodriguez also confirmed that he's considering a run, but will only do so if Maxey decides to step down.