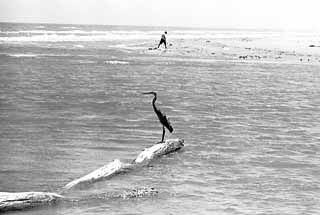 A patchwork of agricultural lands, booming border towns, and fast-growing cities line the Lower Rio Grande (known in Mexico as the Rio Bravo) as it traces its way through four Texas counties along the Texas-Mexico border. Dikes, levees, and dams control the flow of water, preventing flooding and parceling out tens of thousands of gallons to "irrigation districts" between the Amistad Reservoir and Brownsville. Teams of border patrol agents cruise the landscape in white and green jeeps, hoping to stem the tide of illegal immigrants seeking to cross into the United States. Against this backdrop, the U.S. Fish and Wildlife Service and a cadre of environmental activists work feverishly to protect what's left of the natural habitat, while NAFTA-fueled industry and residential development threaten to overrun the last open spaces along the Rio Grande Delta.

Those who seek to conserve the last examples of the Lower Rio Grande ecosystem face multiple challenges: They must determine a way to protect the land not only from development, but also from non-native agricultural crops and invasive plant species that threaten to throw the environment further out of balance. And they must devise a strategy to maintain the flow of fresh water as the river passes through myriad farms and municipalities on its way to the Gulf of Mexico, preserving not just the riparian areas (along the riverbanks) but also the estuaries at the river delta. Currently, as a mere 5% of pristine land is estimated to persist in the region, preservation efforts extend beyond ecological concerns: Agricultural interests battle to survive a decade-long drought, while the area's greatest economic promise lies instead in its rising profile as a unique wildlife resource -- which in turn brings birdwatchers and other "eco-tourists."

Indeed, the Lower Rio Grande Valley, a virtual funnel for birds migrating up and down the Mississippi Valley and Rocky Mountain corridors and the northernmost visiting point for many Central American species, has emerged as a linchpin in Texas' booming eco-tourism business. The jungle-like Tamaulipan Brush ecosystem is one of the most diverse in the nation. The refuge system boasts federally protected endangered species such as the ocelot (a spotted, medium-size wildcat), and state species of concern such as the massive Texas indigo snake. Here thrive also native Texas palms, nearly 300 butterfly species, rare and threatened reptiles and amphibians, and almost 400 species of birds. This cornucopia of species helps explain why despite its relative small size, the 2,000-acre Santa Ana National Wildlife Refuge attracts nearly 200,000 visitors a year who spend, on average, about $80 per day at local shops and restaurants.

The Santa Ana is the crown jewel of the South Texas National Wildlife Refuge complex, but additional federal components include the Lower Rio Grande and Laguna Atascosa refuges. The Texas Dept. of Parks and Wildlife, the Nature Conservancy, and the Audubon Society are all working to extend the refuge system, establishing corridors that will enhance habitat along the border. Meanwhile, the U.S. Congress recently approved legislation that will add more than 100,000 acres to the complex -- an acquisition project expected to take at least 20 years. "It's important to remember this is an environment we share with the plants and animals," says Gary Stolz, the complex spokesman. "If the birds are out there and doing well or not doing well, it tells us something about the health of our environment, and that can help us get a handle on some of the bigger issues." State, federal, and private groups are all working together to extend the South Texas National Wildlife Refuge complex, establishing corridors that will enhance habitat along the border.

Even while the Fish and Wildlife Service focuses on habitat preservation and migration corridors, another arm of the federal government is under attack for its potential damage to the environment. Since the late Nineties, the Border Patrol, under direction of the U.S. Immigration and Naturalization Service, has pursued an aggressive anti-illegal immigrant program known as Operation Rio Grande. The tactics currently used by the INS include mowing the brush and shining lights on dense vegetation, and were not evaluated by the FWS before implementation. When this matter caught the attention of the Texas chapters of the Audubon Society and Sierra Club and the national office of the Defenders of Wildlife, the groups sued the agency in federal court to force a study of Operation Rio Grande's environmental impact. The lawsuit is pending until the INS completes a formal evaluation of how its actions will affect wildlife.

The draft Environmental Impact Statement, scheduled for last spring, remains unreleased, but the border patrol has shown some flexibility -- moving lights so that they don't shine directly on NWR properties, and allowing some of the dense thickets preferred by nocturnal species such as the ocelot and its prey to remain intact despite their use by immigrants for cover. Veteran valley activist Mary Lou Campbell says, "This is a region of enormous biodiversity. It's a meeting place between tropical and subtropical ecosystems, and serves as a last frontier for many of these species."

-- Without a Drop of Water

If land use is a simmering topic along the border, the debate over water allocation is boiling. This is a region, after all, fond of the old saw often attributed to author Mark Twain: "Whisky is for drinking, water is for fighting." Water is the lifeblood of this region -- shaping not just the environment but industry, agriculture, and urban development as well. In the spring, when for the first time in recorded history the Rio Grande ceased to flow into the Gulf of Mexico, there was no escaping the fact that there's a water shortage in the valley.

As might be expected, much finger-pointing followed this historic event, when the river no longer had enough flow to push away a sandbar built up by ocean waves at its mouth, near the coastal beach at Boca Chica. Farmers in the region blame Mexico, which under the terms of an international water-rights treaty has an outstanding water debt to the U.S. But blame also extends to upstream communities, including El Paso, as well as to the Rocky Mountain states, where the Rio Grande has its headwaters nearly 2,000 miles away. Commercial and sport fishing groups blamed the farmers and the continued emphasis on municipal water allocations. The underlying message, now a mantra of environmentalists in the region, is clear: There is not enough water to go around.

"The Rio Grande is getting to the point where it's just like the Colorado [River in California]," says Stolz. "It's all used up. And still we have groups calling for other water uses, and complaining about the 'waste' of water that reaches the ocean."

Hoping to address the crisis, the Texas Natural Resource Conservation Commission has (TNRCC) formed regional planning groups -- including one for the Lower Colorado that will affect Austin -- designed to create models that would ensure that the state can meet demands on the Lower Rio Grande and other sources over the next 50 years. According to the plan for the Valley proposed in January, within the next 30 years demand for water will likely exceed supply, leaving the state in a quandary. In response, the Texas Water Development Board, which is overseeing the TNRCC's effort, has recommended investing more than $200 million to improve delivery of water to farms and ranches, revamping water supply and municipal wastewater systems, and continuing negotiations with Mexico to ensure that it can meet current and future obligations under the water-rights treaty. The board will be accepting comments on the plan through Nov. 12, and plans to formalize and send a final draft to Gov. Perry's office in early 2002.

Environmentalists acknowledge that Texas -- which is in the middle of an international dispute and must also contend with increased demand for water in Colorado and New Mexico -- has admirably attempted to counter prevailing trends on the Lower Rio Grande. But they still complain that this emphasis on increased conservation does not do enough to address the ecological impact surrounding the de-watering of the river. "It's an artificial system now," says Myron Hess of the National Wildlife Federation. "And it's probably not realistic to expect them to consider the environment year in and year out, but we still think they could have done a better job looking at how much water needs to remain in the river." Drafts for each Texas water planning region can be found online at www.twdb.state.tx.us. Send comments concerning the Rio Grande to Phyllis Thomas at the Texas Water Development Board: P.O. Box 13231, Austin TX 78711 or phyllis.thomas@twdb.state.tx.us .