As the economy gets tight, newspapers around the state feel the pain. 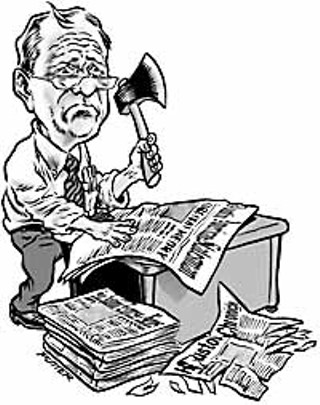 Good newspapers try to place an "unbreachable wall" between the policies of their editorial and advertising departments, but when the economy turns sour, the pain felt in lost ad revenues recognizes few boundaries. Newspapers around the state, big and small, mainstream and alternative, are cutting back and watching the bottom line.

The highest-profile cuts have come at the Houston Chronicle and the San Antonio Express-News, both owned by the Hearst Corporation. The Chronicle recently eliminated 127 positions (about 5% of its staff) and the Express-News trimmed 40 jobs -- though none of them on the editorial side. Most of the job cuts came through "buyouts" -- employees are offered cash to leave. In the case of the Express-News, employees were offered two weeks' salary for every year of employment, up to 40 weeks of pay.

The Austin Chronicle called around to check up on the health of various Texas newspapers:

The Austin American-Statesman isn't giving anyone the ax, but the Technopolis section, devoted to Austin's high tech scene, is history. Also, birth announcements will no longer be free. "There was a significant erosion in ad revenue" for Technopolis, says Managing Editor Fred Zipp, "and it was an expensive section to produce. We thought we could continue to serve those readers in a different way. We'll try to get those stories into our features section, and occasionally on A1." Zipp says the massive collapse of dot-com businesses was to blame. "'Erosion' is just a polite term, really," he says.

"It's funny that you'd call at this time," says Julie Lyons, editor of the Dallas Observer, part of the New Times chain of alternative newsweeklies. "We just laid off three editorial staffers. There has been a significant drop in ad revenues and fewer editorial pages." Lyons said the layoff decisions were made at the New Times corporate level, not locally. "This is just not a good time right now. Dallas has always been a high tech center, and quite a few jobs have been lost [in the local economy]. It has certainly affected our employment ads." Asked how the Sept. 11 terrorist attacks affected the paper, Lyons says, "We don't know. We're waiting to see the effects." Observer publisher Alison Draper added that there were no cuts made in advertising staff, because the paper was already "very lean going into this economic situation." However, "We're seeing an uptick [in ads] from last week to this one, some significant new business. We're being very strategic about what clients we're calling on. We're not just sticking our pole into the water."

The New Times-owned Houston Press is down six editorial positions since May, through attrition and layoffs, including longtime staff writers Steve McVicker and Brad Tyer, and editor Tim Carman.

"We had some layoffs a couple of months ago," says Christy Goldfinch, associate editor of Fort Worth Weekly, which was a New Times paper until last week, when it was sold to former New Times staffer Lee Newquist. "We lost a copy editor, an art director, and an editorial assistant," Goldfinch says. "It was purely economics. We lost a couple of ad reps too. ... It was pretty cut-and-dried. There was no severance pay. It was a horrible situation; we were waiting to see who is next."

The San Antonio Current, another alt-weekly, says it has made no layoffs and is actually trying to fill some current vacancies. In fact, publisher Simon Mulverhill says ad revenues are up from last year and that the press run is up to 50,000 from 40,000 last year. "We're bucking the national trend, but we were a small paper with a lot of head room," he says. "We don't anticipate any layoffs."

Skip Cass, senior vice-president of Belo Corp. (owner of The Dallas Morning News, among other media properties, including KVUE-TV in Austin), says, "From a company perspective, we're carefully watching expenses like most companies, media or otherwise, but ... as a matter of policy we don't comment on matters like that."

Express-News Publisher Larry Walker said no job cuts came out of his paper's editorial staff because, "We felt like the editorial staff was about what it ought to be. It was not overly staffed. We had added some positions just last year." (In fact, the Hearst Corporation pumped $4.5 million into its newsroom; see "Media Clips" at austinchronicle.com/issues/dispatch/2000-03-24/pols_media.html .) Walker says although the buyouts were offered to the entire staff, management decided not to accept any from the news side.

The Houston Chronicle had not returned phone calls as of press time.

And now, the answer to the question you're all thinking: No, The Austin Chronicle has no plans for layoffs, but it is not in hiring mode, either. "Business is off slightly from last year," says Editor Louis Black. "But the advantage for the Chronicle is that it is privately owned [by Black and Publisher Nick Barbaro], so it can go pretty far down the road before it impacts on jobs. But in this economy, layoffs have to be considered a possibility."