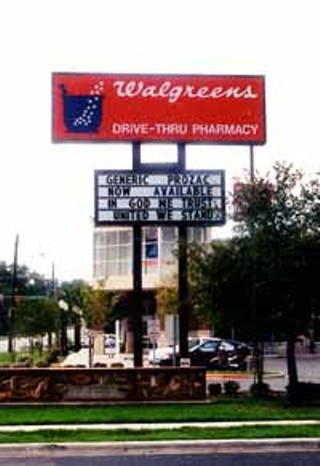 In the wake of Sept. 11, God seems to have elbowed out beer, cigarettes, and breakfast tacos as the most heavily advertised "product" in Austin. While many billboards simply urge us to pray (What Would Atheists Do?),"God Bless America" has become the slogan of the fall season. In fact, God has been blessing America on signs across town -- at steakhouses, gun shops, clothing stores, pizza parlors, and many other places that seem to have little or nothing to do with God. (God Bless Two-for-One Specials? God Bless Pants?) For winter, we suggest God Feels Cheapened -- or, based on this show of pious capitalism, God + Meds = America. (Photo By Julie Carpenter)

Say No to GMOs

Those dang endangered cave bugs are causing heartburn for developers again. This time around, the Texas Capitol Area Builders Association (TxCABA), the National Association of Home Builders, and the Real Estate Council of San Antonio are taking the U.S. Fish & Wildlife Service (FWS) to court for allegedly overstepping its legal bounds. The lawsuit, filed Sept. 28, is a result of FWS developing rules "that can change at the whim of the agency," TxCABA executive VP Harry Savio said in a statement.

From the files of Big Brother: Recently, on ABC's Politically Incorrect, host Bill Maher commented that the New York/D.C. terrorists were decidedly uncowardly in their actions (a claim that many others have made, including Susan Sontag in the Sept. 24 New Yorker). What was truly cowardly, he said, was the U.S. military's tendency to attack with cruise missiles from far away. (Maher was briefly pulled off the D.C. ABC affiliate for his remarks.) During the Sept. 27 White House press briefing, a reporter asked Press Secretary Ari Fleischer about the comments. He replied: "The reminder is to all Americans that they need to watch what they say, watch what they do, and that there is not a time for remarks like that; there never is." A reminder for Mr. Fleischer: Read the Constitution.

After reviewing polling data, the Gallup Organization reports that Americans felt "uneasy toward" Arabs even before the Sept. 11 attacks. Earlier this year, Gallup asked Americans whether they had a favorable or unfavorable opinion of 26 different countries around the world. "From that list, the four lowest-rated countries were Arabic or Middle Eastern: Libya, Iraq, Iran, and the Palestinian Authority," Gallup reports. "Americans were more positive about two other Arab nations -- Saudi Arabia and Egypt." Ironically, the FBI believes that eight of the Sept. 11 hijackers were Saudi nationals, and that the ringleader was Mohamed Atta, an Egyptian.

The headline from a Sept. 20 Reuters story on Yahoo!: "War on Terrorism Threatens War on Drugs." (We knew there had to be a silver lining to this situation.) It turns out that the severely repressive Taliban has been a major U.S. ally -- and recipient of American funds -- for aggressively wiping out heroin production and severely punishing offending poppy farmers.

One of those "Got Milk?" billboards has popped up on MLK, this one depicting Ronald McDonald and two children. Nothing special -- except that both of the little cuties are brown-skinned, and many African-Americans and Latinos are lactose-intolerant. For extra McMulticultural effect, Ronald asks, "Quieres crecer?" (Want to grow?) Earlier this year, Washington, D.C., Mayor Anthony Williams -- who is also black -- caused a stir when he briefly considered appearing in a milk-moustache ad. Williams had also planned to declare May 11 "Drink Chocolate Milk Day," until a group of doctors reminded him that milk makes many of his constituents sick.

The Brackenridge Hospital Oversight Council will consider the city's "hospital within a hospital" for the delivery of reproductive services at its next meeting, Tuesday, Oct. 9, at 8pm on the third floor of the Municipal Building (City Hall), 124 W. Eighth. Call 707-3223 for more info.

The AFL-CIO has developed a Web page for workers who need help with grief and trauma, or assistance getting workers' compensation and unemployment benefits: www.aflcio.org/sept_11/resources.htm.

According to www.dewhurst.org, land commissioner and lt. gov. candidate David Dewhurst is "excited to embark" on the campaign trail and to realize "a common-sense conservative approach" for Texas government. Over the past month, Naked City has monitored Dewhurst's campaign Web site and has been disappointed by the lack of updated info (though the cowboy silhouette photo adds a warm, homey flavor). "On the Issues" mentions no issues, and "In the News" is littered with old news. The only page with any meat-and-potatoes info is "The Dewhurst Team," which boasts about the candidate's endorsements list ("reads like a 'who's who'" of the business community). The most elaborate page is the "contributions" page, which features an online form that asks for your name, address and amount of contribution. Among the required fields, "employer" and "occupation" are not.

The city of Austin's Neighborhood Academy, in partnership with the Office of Emergency Management, has titled its latest workshop "Rethinking Public Safety." (We doubt the name suggests that the city thinks improving public safety is a bad ideas, but then again, everything's been weird since Sept. 11.) The workshop is on Saturday, Oct. 6, from 9:30am-12:30pm in room 4211 of the Austin Community College Northridge Campus (11928 Stonehollow Dr.); for more info or to register, call 974-7671 or go to www.ci.austin.tx.us/ons/onsreg.htm.

Deadline for voters' registration is Oct. 9. Do It!

"Where can I recycle my green bottles?" you're asking. Well, Ecology Action, located at Ninth & I-35, no longer accepts green bottles, but Jerry Hendrix, a spokesman for Austin's Solid Waste Services department, says the city will continue to accept them. As pulverized glass, he says, "we have some internal projects we can use them in. ... some road projects at our landfill, and some landscaping projects, but nothing we would want to rely on long-term."

The National Organization for Women in Texas' annual meeting will this year be presented as a "conference for peace in resistance to senseless violence." The Oct. 13 meeting, titled "Women Waging Peace: Coming Together for Lasting Change," will be held at the Conley-Guerrero Senior Activity Center, 808 Nile, 10am-5pm. E-mail lesley_ramsey@yahoo.com or go to www.txnow.org for more info.

TreeFolks, a nonprofit organization that plants and cares for trees in the Austin area, is dedicating its entire planting season to the victims of Sept. 11. Call 443-5323 for more info.

Dawson neighborhood activist Kelley Smoot has come up with a surprising new angle against Smart Growth: In a letter she sent to the City Council, city manager, and fire and police chiefs, Smoot urged delaying the third reading on the Dawson Neighborhood Plan until after the November mayoral election. "A post Terror Tuesday perspective indicates gathering people in dense concentrations may leave increased numbers of citizens extra vulnerable to terrorists' strikes," she wrote. Note to UT: Cancel the rest of the football season.

The city wants to apply for two loans from the U.S. Dept. of Housing and Urban Development. One (for up to $2 million) would provide credit for small business under the city's Neighborhood Commercial Management Program, and the other (up to $6 million) would help pay for the economically delayed downtown men's homeless shelter. If you want to speak out -- which many people do about the latter -- public hearings on both loans will be held at the City Council meetings on Oct. 11 (at Conley-Guerrero Senior Activity Center) and Oct. 25 (at LCRA as usual).

Yet more Internet-access computers will be coming to the Austin Public Library, thanks to a grant of more than $700,000 from the state's Telecommunications Infrastructure Fund (set up during phone deregulation and funded by assessments on phone companies). The grant will also fund distance-learning programs at five APL branches and improve the library's own online services.

Oakwood Cemetery -- the city's oldest -- and Deep Eddy Pool are now "historic" properties. Comport yourselves accordingly. (The wearing of bustles and farthingales, however, is not required.)

In The New York Times: State press in China have reported that people who work in factories producing moon cakes -- sweet, dense treats, usually sold in gussied-up boxes -- sometimes use their shoes to mix ingredients. Many factories removed the fillings of unsold cakes to "recycle" them. No wonder, then, that the China Bakery Sugar Products Industrial Association says moon cake sales are off by 40% this year, reflecting a trend set in motion several years ago. "The message is clear: If your moon cakes taste unfresh -- like they are three years old -- it may well be that they are," the Times says. Okay, but that still doesn't explain why the Chinese regard dishes made from snakes and other animals as delectable delicacies.