Statesman Falls Off Its Bike

Statesman bungles a report about a local traffic incident 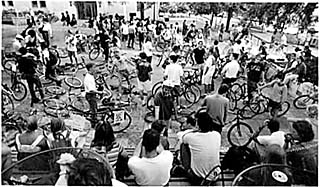 A Critical Mass meeting on the UT West Mall, circa early 1990s
(Courtesy of criticalmasshub.com)

If you read the Metro & State Roundup section of Saturday's Austin American-Statesman (Sept. 29) you might be under the impression that a "melee" instigated by cyclists with the activist group Critical Mass ended with four of the cyclists beating the driver of a Jeep Wrangler who got in their way. Not so, say at least two of the riders who vociferously (and independently) objected to the Statesman's version of events. "We're not looking for an article that is pro-Critical Mass," said cyclist Ezra Teter. "[We're] just looking for something to balance out the Statesman." According to the Statesman account, the bicyclists were deliberately blocking traffic at the intersection of Cesar Chavez and Congress Avenue, when a driver "frustrated by the delay" drove into the intersection and "narrowly missed" several of the riders, "but hit the front end" of another driver's car. Further, the paper reported that Mike Henderson, the driver of the Wrangler, told the Statesman that he had been "beaten by four bicyclists."

The unbylined reporter(s) were right about Henderson's Jeep hitting another car -- but according to other witnesses, the rest of the report is less than accurate.

According to Justin Davis -- the Statesman's "unidentified bicyclist" who supposedly participated in Henderson's group beating -- the Critical Mass riders encountered Henderson at the corner of Congress and Second. "We had come to the intersection and while we were going through, the light turned red," he said. In an effort to keep the group together, the riders continued through the red light. "[Drivers] at Second Street began to creep forward," he said. "When I looked over, a guy in a Jeep -- four or five cars back on Second -- just gunned it." According to both Davis and Teter, Henderson drove around the other cars and began swerving through the cyclists as they headed south toward Cesar Chavez, where they finally had to stop for eastbound traffic. At that point, said Teter, five or six cyclists, including Davis, got in front of Henderson's car to stop him from moving. This is when Henderson tried to continue driving southbound, and hit another car. "I couldn't believe it," said Teter. "He just stepped on the accelerator, with like five or six people in front of him, and got one bike [Davis'] wedged under his front wheels." According to both riders, Henderson got out of his Jeep and did get into at least a pair of one-on-one altercations with cyclists, but according to Teter and Davis, each quickly dissipated.

Shortly thereafter, APD officers arrived, followed by a Statesman reporter and a photographer. "The cops talked to [Henderson] and they didn't even ask us what happened," Teter said. "Originally they weren't even going to arrest him -- until we told the cops that we had a video." Indeed, another of the cyclists had been running a video camera throughout the entire event. Police ended up arresting Henderson for reckless driving and Davis for "obstructing a highway," apparently because his bike was lodged beneath Henderson's Jeep. At press time, APD had not returned phone calls requesting comment.

According to Teter and Davis, the Statesman reporter -- like the cops -- failed to interview cyclists about what exactly had occurred. "He never asked me what happened," said Teter, "he just asked me what the political views are of the people on Critical Mass." (The Statesman duly noted that someone named Ezra "Teeter" called the ride "a protest against a lack of bicycle lanes.") And Teter adds that the daily's photographer made comments likening the Critical Mass cyclists to the terrorists who attacked New York and D.C. "He said, basically, that the terrorist attacks on Sept. 11 were just a more extreme form of Critical Mass. ... I hardly expected them to write a fair article, but I still couldn't believe it."

John Bridges, the Statesman's acting metro editor, would not name the reporter on the story and said he didn't know who the photographer was. Asked about the photographer's reported comments, he responded, "That's the first time I ever heard of that." Bridges insisted, "If you read the brief, if makes it clear that we did talk to the cyclists," and said he had received only one e-mail from a cyclist charging inaccuracies in the story. "I don't agree," he said. "I don't think the differences are enough to warrant a correction. ... Basically everything you need is in the brief, as far as I'm concerned."