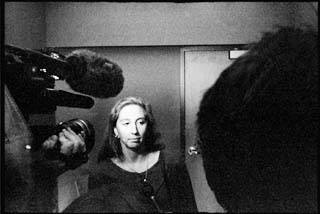 The pretrial hearing for Michael Scott, 27, second of three defendants scheduled to stand trial for the 1991 yogurt shop murders, adjourned Tuesday after State District Judge Mike Lynch replaced Scott's lead attorney, civil litigator Tony Díaz, with Carlos García, who has extensive experience handling capital cases. The switch came as no surprise to anyone in court Monday, when Diaz asked Lynch for a continuance, citing just-passed indigent defense laws requiring poor defendants to be assigned two attorneys, one of whom must have specific capital experience.

The prosecutor, Assistant District Attorney Robert Smith, objected -- primarily because Díaz was initially not appointed but retained by Scott's family (although the court has ruled Scott indigent and his wife, Jeannine Scott, says the family has no money for counsel) -- and Lynch at first denied Díaz's motion. Perhaps Díaz's subsequent unfocused questioning of prosecution witnesses persuaded Lynch to change his mind. So Garcia is in, Díaz is aiding in the transition, and further pretrial hearings are postponed until November to allow García to prepare. "I don't know a thing about this case except what I've read in the papers," García said. "I need to now learn everything from scratch." Dexter Gilford will remain in place as Scott's co-counsel.

The change of attorneys could affect issues to be addressed at pretrial -- Garcia could file additional motions for the court's consideration or could withdraw any number of motions already filed (Lynch said Monday that defense motions already fill nearly three docket pages). It is unlikely any of the weightier issues will disappear by November: a motion to suppress statements Scott made to police about the murders, a motion to move the trial outside of Travis County, and a motion to address the alleged "abuse and misuse of the grand jury by the prosecution."

The first two motions are well-worn territory. The first will address whether Scott was coerced by Austin Police Dept. detectives into implicating himself in the murders. His lawyers are seeking the change of venue because, they say, the murders have received so much media attention locally it will be difficult to find an impartial jury.

The third issue -- whether or not the DA's office misused or abused the grand jury process -- could generate intriguing testimony. A Travis Co. grand jury indicted Scott and co-defendants Robert Springsteen (convicted and sentenced to death this spring) and Maurice Pierce in Dec. 1999. Not long after the jury's term expired in early 2000, grand juror Diana Castañeda contacted Judge Lynch, complaining that the jurors had been "used as pawns in what I assume to be a rush to judgment." Castañeda told the Chronicle she met with Lynch -- with American Civil Liberties Union attorney Ann Del Llano at her side -- and outlined her concerns.

"Basically I felt that information had not been shared with us," Castañeda said. "We weren't allowed to see the videotapes [of Scott and Springsteen's "confessions"]. We didn't get to see or hear them, we had to take [the DA's] word on what they contained." In addition, she said, jurors were not allowed to ask direct questions of the witnesses -- usually a hallmark trait of grand jury proceedings. Instead, she said, prosecutors Buddy Meyer and Greg Cox told jurors to tell the prosecutors what questions they wanted to ask and, in turn, the lawyers would be the ones to pose the questions to the witnesses. "We had to ask through the DAs, who changed or paraphrased our questions to suit their purposes," she said. "It was weird."

While Castañeda said Lynch did not appear to feel that anything was "amiss," she was not convinced. "I felt there were problems because I didn't feel we were afforded the rights typically given to grand jurors," Castañeda said. "It seemed like everything was just skewed against them [the three defendants]." (Judge Lynch, perhaps obeying his own gag order, did not return a call requesting comment.)