An Alliance of Friends

An Alliance of Dripping Springs residents forms to defend itself against unregulated development. 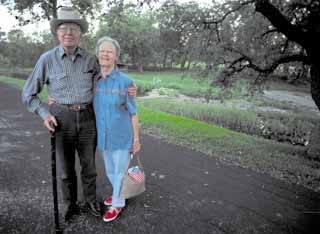 Jack and Lee Hendrickson, Friendship Baptist Church members since 1976, were baptized in the creek. (Photo By Beverly Barrett)

A Baptist church, a Transcendental Meditation colony, and a Hindu temple are all landmarks within a few miles of one another along a stretch of roadway that cuts across the rolling countryside of northern Hays County. It's peaceful here, but not as peaceful, certainly, as it was when Rae Smith was growing up in the Thirties. She learned the three R's in the one-room wooden schoolhouse that served on Sundays as the Friendship Baptist Church. Back then, Bear Creek, a natural spring, ran year-round alongside the church, and parishioners would stand on the grassy banks singing, "We Shall Gather at the River" when one of their own was baptized in the clear, cold water. The creek is dry now, dammed by new subdivisions further upstream, and the Rev. Sam Shurtleff -- Brother Sam, as he is called -- relies on old-fashioned tap water to baptize folks, indoors, in a newer version of the church built in the late Sixties.

Like her spiritual neighbors, Smith, also lives along FM 1826, on the same land her father worked from morning to night. She is a lifelong member of Friendship Baptist. Until about 10 years ago, Smith could sit on her front porch without having to raise her voice to be heard above the constant whoosh of pickups and Suburbans. Even property-rights advocates like Smith long for the rural hominess that existed before a Central Texas explosion of growth began pock-marking the hilly landscape with high-end subdivisions. "People have a right to build on their land," she says, "but I have to admit I don't like it out here as much as I used to."

Many who live up and down FM 1826 share Smith's uneasiness about growth in this crook of Hays County. This concern has led to the formation of an alliance -- tentatively called the Friendship Alliance -- that seeks recognition as a stakeholder in growth management decisions. The group's mission, is not to stop growth, much as some of them would like to, but to make sure developers build with a fair amount of sensitivity to both their neighbors and the environment.

Of course, the majority of those who make up the alliance are not lifelong stewards of this land. The residents of a meditation community called Radiance arrived in the early Eighties, before the market boomed, busted, and then boomed and busted again. When they showed up, old-timers must have taken one look at the newcomers from Austin and declared: "Hippies! There goes the neighborhood." But the world didn't end with their arrival, nor did it change all that much. The younger neighbors, many of them baby boomers with grown and growing kids today, settled far, far back from FM 1826 into the woody peacefulness of the Good Earth. As a development cooperative that owned 900 acres of the old Christal Ranch, the New Age landowners began selling off large lots to like-minded individuals committed to sparing trees in the name of progress. Over time, Radiance grew to include two other communities -- Goldenwood and Goldenwood West.

On a rare rainy morning in late August, Radiance resident Roger Kew stops midway down the path leading to the Golden Dome -- the communal meditation site -- and stands motionless for a couple of seconds. "Hear the quiet?" the native Londoner asks, cocking his head. "You don't hear the traffic here."

For the most part, the Radiance and Goldenwood residents, many drawing on their college activism roots, are the driving force behind the FM 1826 alliance. The call to action grew out of their dismay over a nearby development deal that was quietly approved without their knowledge. The residents didn't learn of plans to build 2,700 homes, some commercial space, and a golf course on adjacent Rutherford Ranch property until several weeks after the Dripping Springs City Council and Cypress Realty had sealed the deal. They learned of the agreement when they discovered that a bill -- to create a special taxing district for the Cypress development -- was on the verge of winning approval in the Texas Legislature and, ultimately, becoming law. Guru Dev looks on during meditation at the Radiance Dome. (Photo By Beverly Barrett)

A last-minute parliamentary maneuver by Fort Worth Rep. Lon Burnam killed the legislation, but Kew still conjures vivid images of a worst-case scenario, had the bill passed. "It could have been an extreme threat to the integrity of our community. They could have condemned our lands to put roads through; they could have annexed us. We could have been swallowed up and become a part of that community." Kew utters those last words with sharp disdain. "These kinds of developers don't move into this area because they have a vision and a commitment to the land," he says. "They are committed to profit, and that's not appropriate criteria by which to develop this region."

The Hindus arrived last, in the early Nineties, feeling an immediate spiritual kinship to the land once owned by legendary Texas writer Walter Prescott Webb. Situated midway between Friendship Baptist and the Radiance community, the old Webb homestead provided a haven for Webb's friend, Roy Bedichek, who penned Adventures With a Texas Naturalist while living on the ranch. "The sights, sounds, odors, and, especially, the feel of this place," Bedichek wrote in his introduction, "stimulate in me memories so warm and intimate that taking up residence here seems more like a homecoming than an escape."

The Hindus experienced this same sense of homecoming when they laid eyes on the 230-acre property, which to them serves as a replica of the holy land of Braj in India. Today, the striking Barsana Dham temple serves as the main U.S. Center of the International Society of Divine Love and provides a cultural gathering place for Indians in Central Texas. "It's a very beautiful spot and we've very dedicated to preserving its natural beauty," says the temple's Vrinda Devi.

Like their neighbors, Barsana Dham members do not relish the idea of a landscape radically altered by more development -- but what can they do? Devi, for one, tries to maintain a hopeful outlook in the face of the apparently inevitable. "We're happy for well-managed growth, with all the elements brought to bear in terms of [traffic] safety and the environment. That way," she says, "everyone benefits."

Down the road at Friendship Baptist, Rev. Shurtleff stands on the banks of Bear Creek, on the spot where parishioners used to gather and sing during baptism ceremonies. On this day in August, the sky is overcast and the creek is swollen with water, but it's just muddy runoff that Shurtleff suspects will dry up as soon as the rains stop. Himself a relative newcomer to the area, Shurtleff says he has mixed feelings about the possibility of as many as 19 new subdivisions popping up in northern Hays County. "It's a double-edged sword," he says. "The more people who move out here, the more people there are to potentially minister to." On the other hand, he mused later, it was new development that caused the church's precious little creek to run dry.