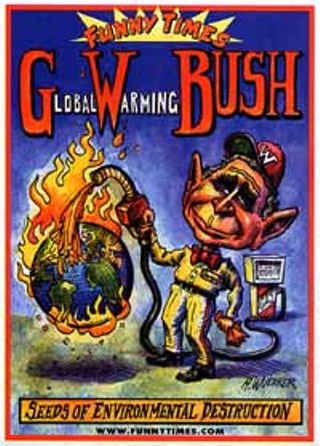 You probably harvested your "Texas Homegrown Dope" back in December, so now you'll want to plant a "Global Warming Bush" in your yard. Get the new seed packets from Funny Times, 888/386-6984 or www.funnytimes.com.

Waterloo Brewing Co., a homegrown, downtown watering hole, will close its doors for good Sunday on an ironic note: The very Renaissance it helped create in the Warehouse District is apparently driving the brewpub out of the neighborhood. Unconfirmed reports have the building's owner wanting to replace Waterloo with luxury condos and retail shops, similar to the project under construction next door to the pub.

Waterloo employees confirmed the closure but deferred to management for official comment. Owner Billy Forrester could not be reached at press time.

The Warehouse District was a bare-boned section of downtown when Waterloo opened at Fourth and Guadalupe in late 1993, long before city subsidies for downtown projects became standard fare for developers. Since its opening, the neighborhood has undergone a revival of new business and residential development, although not all of the projects have seen positive results. Construction of the city-subsidized Intel building just west of Republic Park was abandoned this spring in the face of an economic downturn.

Waterloo's opening heralded the arrival of the state's first brewpub born out of new laws allowing breweries to sell their product on site. Forrester had lobbied the Texas Legislature for changes in the law and wasted no time setting up brewpub operations once the rules took effect in September 1993.

Apart from its beer, one of Waterloo's biggest draws was its breezy rooftop deck. The brewpub was a favorite stop for political insiders to swap gossip over a burger and a pint of beer. The pub also opened its doors to live music fans with such events as the annual Texas Independence Day Celebration, a free concert featuring a healthy lineup of local musicians (see Dancing About Architecture, for more). -- Amy Smith

Lay preacher and UT journalism professor Marvin Olasky was the featured speaker for the Travis Co. Republican luncheon this month, expounding on his disappointment with the current House version of the Bush administration's "Charitable Choice" legislation. Olasky -- speaking "as a journalist," he said -- complained because the so-called faith-based initiative doesn't go far enough in allowing religious groups to proselytize under the pretext of providing taxpayer-funded social services.

Olasky described lawmakers' attempts to make a clear distinction between human services and religious programs as interference with religious freedom. He did later tell "Austin Stories" that in those places (e.g., small towns) where no nonsectarian social services are available, the government would be required to provide them -- although he did not say where the money would come from for such duplication of effort. 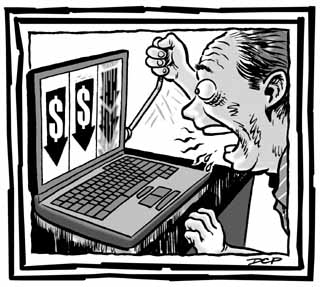 Investors poured $45 million into Agillion, the Austin software maker formed by Steve Papermaster and Frank Moss. Last week, it was reported that the now-bankrupt company auctioned off its software -- the only remaining asset of any real value -- for a mere $100,000. For that kind of payoff, Agillion's funders would have done just as well with a trip to Vegas. (Illustration By Doug Potter)

Asked by an audience member how citizens could be assured that people providing "faith-based" welfare or counseling were experienced professionals, Professor Olasky replied that "credentials" are overrated, and that under the "faith-based" theory of healing he prefers, generally unnecessary.

All this learned scholarship took place over a very nice lunch, amidst a jovial and friendly crowd of happy Republicans and the strolling white peacocks at Green Pastures -- once the family home of John Henry Faulk. No doubt the grand old patron saint of free-spirited, populist democracy was looking down and chuckling at all this silliness -- and wondering whatever happened to South Austin.

Despite what you may have heard,Gus Garcia is not running unopposed in the upcoming special election to fill the remainder of outgoing Mayor Kirk Watson's term. Garcia's opponents will include Jennifer Gale (natch), 20-year-old UT student Daniel Nazar (isn't there always a 20-year-old UT student running? What, do they offer course credit for it or something?), and, most recently, Sammy Allred. Yes, that Sammy Allred, the cranky KVET deejay. And before you start thinking Gus is a safe shoo-in -- and my, wouldn't it be funny to tell people you voted for a Sammy Geezinslaw for mayor! -- we just have two words for you: Jesse Ventura (for more mayoral possibilities, see Mike Clark-Madison's story Would You, Could You Be My Neighbor?). -- Lee Nichols

The Travis Co. Commissioners gave their final blessing to a $199-plus million bond package Tuesday, after sitting through the last round of pro and con testimony from the local citizenry. Despite a last-ditch effort by Commissioner Todd Baxter to include the Frate Barker Rd. proposal with the overall package, the contested measure will stand alone on the ballot on Nov. 6 (that's Election Day, so don't forget to show up at the polls). The $14.1 million Frate Barker proposal would cross over the Edwards Aquifer recharge zone and cut through land the city has acquired for preservation purposes. But residents in the area, including neighbors in the Estates of Shady Hollow (incorrectly called Shady Oaks in last week's bond issue account), regard the project as a safety issue. They say the road is needed to relieve traffic congestion on Brodie Lane, which drivers use to travel to and from the suburbs. Another controversial bond question -- $66 million for right-of-way land acquisition for SH 130 -- will also stand alone on the ballot to avoid jeopardizing the other bond proposals, commissioners said.

Apart from the two heated items, county voters will decide on several bread-and-butter projects, including road, bridge, drainage, and pedestrian-access work totaling $57.4 million; park development in each of the four precincts ($28.6 million), and right-of-way acquisition for SH 45 North/FM 1826 ($32.7 million). Commissioner Margaret Gomez, who had championed a bond package of no more than $80 million, was the lone dissenter in Tuesday's vote.

Commissioners also voted to raise their salaries by 7.2%, with Baxter voting against and vowing not to accept the new salary of nearly $74,000 a year. County Judge Sam Biscoe only accepted half of his 10.5% raise; that'll bring his annual pay up to $88,861.

Anxious to lower Austin's annual bird-homicide rate, a group of animal lovers and wildlife enthusiasts recently requested City Council to consider passing an ordinance forcing cat owners to keep their kitties indoors. Council wasn't hip to the idea, and neither was Austin American-Statesman wisecracker John Kelso, who wrote a column poking fun at the group. "Is there any other city in America where anyone would be silly enough to try to make it illegal for cats to run loose?" Kelso asked. "That would be like passing an ordinance to keep the apes out of the bananas."

But the folks in Rising Sun, Maryland, don't think their Animals Running at Large ordinance is silly at all. Passed several years ago, the law prohibits cats as well as dogs and other animals perceived to be pets from roaming freely through the town. Pet owners who fail to uphold the law face a $50 fine for the first infraction and $100 for each subsequent violation.

Town Administrator Jeff Williams, who handles day-to-day municipal issues for Rising Sun's 1,700 residents, says the ordinance has saved him many headaches by reducing the number of cat-related complaint calls made to his office. "It gets old after a while," Williams says, adding that most local incidents involve cats who mess up people's flower patches or mistake children's sandboxes for litter boxes. However, there are always "extreme situations," which demand intervention from county animal control.

In other news: While Sterling, Colorado, does not have an Animals Running at Large ordinance, it does have a mythical law requiring free-roaming felines to wear taillights. Kathy Sanger, a paralegal who has worked in the Sterling city attorney's office since the Seventies, swears the cat-taillight law is not true. Nevertheless, every year she receives several calls from people curious about the law. "We tried to trace it back to see if it was ever on the books, but there's no credence," she says. -- Lauri Apple

The city of Austin's Neighborhood Academy, a series of workshops designed to help citizens understand how "process" ultimately determines whether your neighborhood goes the way of strip malls or sustainable living, is registering citizen-students for its fall term. Classes include topics such as "Resolving Neighborhood Issues and Disputes," "Neighborhood Planning: What It Is and Isn't," and "Land Use: The Basics," among many others. For info, call 974-7672 or go to www.ci.austin.tx.us/ons/onsreg.htm. -- Lee Nichols