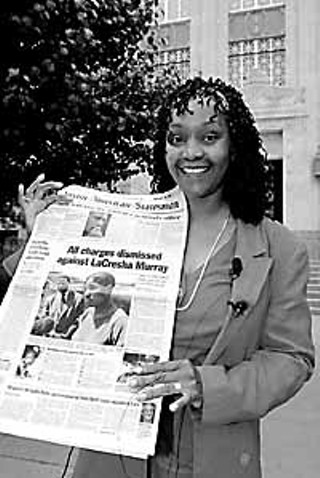 Barbara Taft of People of the Heart (Photo By Jana Birchum)

On Monday, Aug. 13 -- after five years and two convictions -- all charges were finally dropped against 17-year-old Lacresha Murray. In 1996, Murray, then 11, was initially charged with capital murder in the beating death of 21/2-year-old Jayla Belton. Police and prosecutors said on May 24, 1996, Murray stomped the toddler to death at the Murray home, where Jayla had been left in the Murray family's care.

"I am happy," Murray said. "I was just ready for it all to be over with." The district attorney's office -- which requested dismissal of the charges before state district Judge John Dietz -- did not return phone calls from the Chronicle requesting comment.

Murray was tried in 1996, convicted of injury to a child and criminally negligent homicide -- prosecutors had withdrawn the capital murder charge -- and sentenced to 20 years in prison. Subsequently, Judge Dietz granted Murray a new trial, and in 1997, she was convicted of injury to a child and sentenced to 25 years. In 1999, after nationwide publicity about Murray's case and the apparent mishandling of evidence by prosecutors and the Travis County medical examiner, the Third Court of Appeals overturned Murray's conviction on the grounds that her confession was improperly obtained. She was released from the Texas Youth Commission facility in Corsicana, and the case was remanded to Travis County.

Central to the D.A.'s case, and the basis for the appeals court overturning the conviction, was a nearly three-hour interrogation of Murray led by APD Det. Ernesto Pedraza. The court found the statement Murray made to the police on May 31, 1996 to be the result of Murray's "fright and despair." Murray had been a minor in state custody and had not had access to her parents nor to a lawyer for five days before the interrogation. Before and after conducting any interviews of a minor, police are required by law to take the child before a magistrate to ensure that he or she understands what is happening.

In their appeal, prosecutors argued that Murray was not officially in state custody and that she could have left the interview at any time, citing as evidence, for example, that "officers offered her a Coke." The court didn't buy it, and ruled Murray's statement inadmissible.

Even without the "confession," prosecutors could have tried Murray a third time and, since 1999, that is what they have said they intended to do. But there was no physical evidence directly connecting Murray to the crime -- in fact, some interpreted the physical evidence as suggesting that Jayla had received the blow to her liver (which ultimately killed her) hours before she was taken to the Murray home. In their statement to the court, prosecutors acknowledged they had only "marginal" evidence to try the case, though they added that Jayla's mother, Judy Belton Shaw, had requested the charges be dropped.

Murray's supporters maintain that she had become a political pawn in an election year that saw 20-year incumbent D.A. Ronnie Earle faced with a Republican opponent -- Shane Phelps -- who was attempting to make Earle look soft on crime. "The politics of the day was an election," said Barbara Taft on Tuesday. (Taft founded People of the Heart, a group of Murray's supporters active on her behalf since 1996.) "The politics now is, how do we get out of this thing, how do we save face?

For more on this case, see Jordan Smith's "Justice Denied," in the Aug. 7, 1998 Chronicle (auschron.com/issues/vol17/issue48/pols.lacresha.html).