Bush Returns to the Capitol 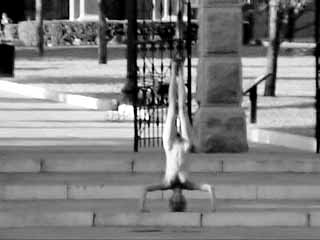 Katherine Chronis on her way to mail a letter

If there are indeed eight million stories in the Naked City, this is definitely one of them.

Katherine Chronis, a New York multimedia conceptual artist in town for a performance at the Vortex theatre, was arrested Aug. 1 on the Capitol grounds for "indecent exposure." Chronis was naked at the time, having walked up Congress without clothes from the Museum of Art, accompanied by video and still photographers documenting her walk as part of an ongoing performance piece Chronis has been doing across the country for about a year. She says she documents herself "doing mundane activities in public" while naked, and later shows the film and pictures demonstrating her interactions with other people. "That night I was going to mail a letter," Chronis said. "Having a destination also just helps to keep me focused while I walk." On her walks, Chronis occasionally stops and performs a headstand -- as she did on the steps at 11th Street just in front of the Capitol gates.

Precisely what happened next is in dispute, although it may get sorted out when Chronis returns to Austin for her court hearing Sept. 5. According to the arrest warrant filed by Capitol trooper Keith Preusse, park rangers had called the Austin Police Dept. about a "white female that was exposing herself" near the Capitol. Preusse's warrant says a "family visiting the Capitol" had complained to a DPS trooper about seeing Chronis, and the APD responded first. Chronis says she was first arrested by "blue-uniformed" police (that would be APD), and then after some discussion was handed over to "brown-uniformed" police (DPS troopers, who have enforcement responsibility at the Capitol). Chronis also says she first offered to put on her clothes (carried by a friend) and was refused until after she was in custody -- and that one of the policemen told another to "see if he could get a statement" from a family that Chronis couldn't see from the spot she was arrested.

DPS spokeswoman Tela Mange said Chronis is welcome to make her arguments in court, but that the police were responding to a public complaint. "There were families with children there," said Mange. "They saw what was going on, and were seeing the sights, and saw a little more than they had bargained for." According to the DPS warrant, Ross Magladry of El Paso told the trooper that his family "stumbled upon a naked woman performing headstands in the nude." Magladry said, "The event left an inselible [sic] impression on my children (minors) -- not what I would chose [sic] for their first visit to the state Capitol," and that the family was "offended and alarmed." The warrant adds that Chronis told police "that she was doing this for art."

The trooper apparently didn't ask the kids for their opinions, but Mange told "Naked City," "As a mom, I wouldn't want my kids to be down there at the Capitol, the birthplace of Texas, with the police and firefighters memorial there, and see somebody naked. You kinda can't do that." Chronis said that the police seemed particularly disturbed that she was on the Capitol grounds, and Mange said, "Well, she might have gotten away with it on Sixth Street." Was there some concern about concealed weapons? "I'm not even gonna go there," responded Mange.

Chronis, charged with a Class B misdemeanor, spent the next 36 hours in the Travis Co. Jail, where she said the conditions were worse than the downtown Chicago lockup -- the only other place she has been arrested (the charges were later dropped). She's done her nude walks in New York, Ohio, Indiana, Illinois, and now Texas, and says she received the worst treatment here. "I'm not a criminal," Chronis said. "I'm not trying to make trouble -- I'm just trying to change people's reality for a moment. Most people are amused or pleased." Jailed until she could raise $1,000 bail from friends ("I'll have to throw a benefit in New York to repay them"), Chronis said she began menstruating heavily yet was given no tampons for several hours. "The guards just screamed at me to clean it up." (For more on problems at Travis County jails, see this week's "Austin Stories.")

Under Texas law, indecent exposure is defined as exposing the anus or genitals "with intent to arouse or gratify the sexual desire of any person ("any person" is often defined as the offender him- or herself). So Austin attorney Stuart Kinard, whom Chronis consulted about her arrest, said that the outcome of her case may depend on whether her anus or labia were actually visible to other people. "I have a very thick bush," said Chronis, "and I was not displaying my genitals in 'a lewd manner.'" As Kinard put it, "That might set her free, because a 36-year-old Eve comes with her own fig leaf."

"The law in this particular case is very simple," concluded Kinard. "No Pink, No Clink."