The City's Proposed Budget Is a Portrait of Declining Expectations 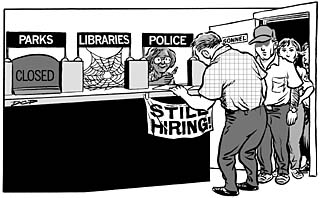 People, people who need people, are the unluckiest people in the world. Or they will be come October 1, if they're managers with the city of Austin, whose upcoming lean 'n' mean budget -- unveiled in draft form by City Manager Jesus Garza yesterday, Aug. 2 -- aims to use unfilled staff positions to soak up the city's red ink.

You've been hearing for months now -- including from us in our May 25 cover story, "Jesus Saves" -- that the Slowdown (we'll get back to you when we can officially call it a Bust) has decimated the city's sales tax collections, which fund the bulk of the city's discretionary spending. We posited back in May that things might get better by the time Garza rolled out his proposed 2001-2002 (FY 2002) city budget. They have not.

So the city manager's spending plan will likely reveal about a $16 million shortfall in the General Fund, which is where your sales and property taxes live and which supports city departments that are not self-supporting: police, fire, EMS, parks, libraries, planning, and so forth. (Those departments that do make money, such as the utilities, convention center, and airport, are "enterprise funds." Some city departments, like Public Works, use both General Fund and enterprise fund money. All departments transfer out a portion of their money to pay for the city's back-office functions, like human resources and building services.)

That $16 million gap will be covered by what little money is left in the General Fund from this year, so unless the economy gets going real fast, which it will not, things are only going to get worse in FY 2003 (starting Oct. 1, 2002). That money will be left over this year, in part, because Garza squeezed millions in emergency savings out of the General Fund departments this spring.

Those midyear liposuctions took care of all the obvious options for belt-tightening -- food and ice budgets, travel and training, new laptops, temporaries and consultants, and other stuff. That just leaves personnel expenses, at the city as in most organizations, the major focus of spending. The city had already frozen more than 100 vacant positions to meet its midyear savings goals, and a number of those positions will be eliminated entirely under Garza's FY 2002 spending plan.

Among the most critical cuts -- called out as "key issues" by Garza, which is sort of an invitation for the City Council to restore them if money falls from the sky -- are at the Parks and Recreation Department (11 vacant positions), the Austin Public Library (17 current positions, though APL is also adding employees to staff the new St. Johns branch, so the net decrease is only two), and the Neighborhood Planning and Zoning Department, which -- among the other headaches besetting the increasingly star-crossed program -- has long been short-staffed and way behind schedule on developing neighborhood plans and will now remain so. (Three NPZD positions will remain frozen but on the books.)

Both APL Director Brenda Branch and NPZD Director Alice Glasco are "re-engineering" to figure out how to absorb these cuts without actually reducing services, which Garza claims confidently can be done, even though he still considers the cuts an "issue." (Interestingly, at this very juncture, the founding director of the neighborhood planning program, Glasco's now-deputy Carol Barrett, is resigning, having been named the new planning director in Berkeley, Calif.)

Now, the citizen stakeholders who care about parks, libraries, and neighborhood planning do not normally find themselves aligned with Jesus Garza on issues of fiscal priority. So the fact that the city manager says, even tacitly, that cuts in those areas are problematic is a welcome sign. And purely as a management practice, it makes sense to hold down ever-inflating personnel expenses when you don't expect to return to "profitability," if you will, for several years and can't rule out laying off the key staff you just hired.

But hey! None of these constraints appear to apply, as usual, to the Austin Police Department, which will be adding 66 new officers under Garza's budget proposal. Most city departments, like most employers anywhere, hire people only when there's a demonstrated need for them and only when they have the money. But these additions to APD's sworn strength -- about a 5% increase in the number of men and women in uniform -- are primarily driven by the city's desire to maintain an appropriate staffing ratio, which is currently 1.9 officers per 1,000 citizens, and which Garza aims to bump up to 2.0/1,000 by FY 2006.

Do we need these cops? That's a turbulent question. The department's own crime statistics don't suggest major increases in the crime rate, and when he sent his draft policy budget (the condensed version of the budget he'll present today) to Council a month ago, Garza specifically pointed out that "the reason for [moving to 2.0] is not because Austin is experiencing higher crime rates. On the contrary, in the year 2000, our [violent and property] crime rate reached a 21-year low. ... However, we are continuing to grow at a fast pace and, particularly in the area of traffic enforcement, we need to have more police on the streets."

Well, that's nice, but all city departments are straining at the seams. So Garza hasn't yet explained why, if our crime rate has been steadily declining, we need police more than we need librarians or city planners -- other than that there's not much political downside to standing up for safe streets. (The Fire and EMS departments are getting new staff, but they're also opening new stations, and they won't see anything like the APD hiring bonanza.)

Indeed, Austin's loudest advocate for safe streets, Texas Monthly publisher Michael Levy, has barraged his approximately 7,000 e-mail friends with criticisms that Garza's budget doesn't do nearly enough for APD; that the crime rate is actually spiraling out of control and APD is floundering in its attempts to stop it; and that retirements and turnover give the lie to Garza's claims of maintaining, let alone increasing, APD's 1.9/1,000 ratio. When talking about cops, Levy often delivers an excellent impersonation of a fear-ridden hysteric, but he has raised a lot of valid concerns about APD performance, most of which suggest management problems that throwing new (young, ill-trained, badly deployed) cops on the street will do little or nothing to solve.

Besides, no matter how many people agree with Levy that Austin is only one shade better than Beirut, the money for Garza's proposed 66 new police officers simply does not exist. Many of you managers might say that whatever we can spare for police staffing is already going into the $7.56 million in pay raises called for in the city's Meet and Confer agreement with the Austin Police Association, adopted by the City Council earlier this year. (The new cops, plus their cars, guns, and whatnot, will cost more than $3.5 million, though $1.5 million is supposed to be covered by federal grant funds.)

While Garza makes reference to a number of places where the FY2002 budget funds an increase in city services, his dozens of new cops represent the only real big step up from current commitments. The budget does include more money for merit raises for city employees, but Garza has been pumping (much-needed) money into compensation and benefits for several years, and his FY2002 budget also drops two of the city's three HMOs in an attempt to control employee and retiree health care costs.

As with the library, any new money and staff are often attached to new facilities being opened as the city's billion-dollar 1998 bond program begins to bear fruit. Foremost in FY 2002 is the new St. Johns multipurpose campus attached to the new J.J. "Jake" Pickle Elementary School in Austin's most depressed neighborhood. The campus includes a recreation center, neighborhood social service center, library branch, and health clinic.

Throughout the Boom, Garza and Mayor Kirk Watson have tried to spend as much money as possible on capital projects, via three bond elections and with millions in cash each year held back from the operating budget. This year is no different, with not only bonds and cash but also the city's rebated Capital Metro sales taxes going into land, buildings, and other assets. And Garza wants the City Council to adopt a resolution to "divert 50% of any excess sales tax revenue for one-time expenditures," which are usually capital projects, so that this money "will not fund operating costs, and thereby will be utilized as the 'one-time' revenue that it represents."

In other words, Garza and his people don't want to get fooled again into spending windfall sales tax growth on the day-to-day operating budget, which is what got them into $6.6 million of money trouble this year. This is supposed to be wise public administration, but once capital projects are built, people generally expect to use them, and the operations and maintenance cost of the projects already in the pipeline is not going to be small. And Garza already says next year's General Fund gap may approach $40 million. So it may be too late to avoid a crisis. In FY 2003, the city is supposed to open: