Not by the Book 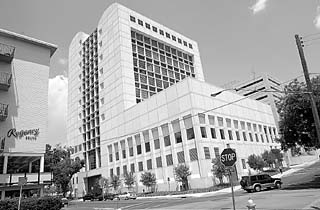 The new Travis County Central Booking Facility at 10th and Nueces failed its recent inspection by the Texas Commission on Jail Standards, which meets to discuss the issue Aug. 2. (Photo By John Anderson)

It is safe to say that getting the new Travis County Central Booking facility up and running was no small feat. In 1999, the proposed move from its previous building next to Austin Police Dept. headquarters on East Seventh to the new location at 10th and Nueces drew fire from residents of the Pease neighborhood, who vociferously raised concerns about the safety of neighborhood residents and children at nearby Pease Elementary School. The move squeaked through the City Council 4-3 -- fueled in large part by concerns that if Central Booking stayed where it was, APD was going to have to transfer at least 50 officers off patrol and into the facility to run the operations.

The new booking facility finally opened in April, and while neighborhood concerns have quieted somewhat, concerns about safety are now emanating loudly from Travis Co. Sheriff's officers working inside Central Booking's halls. In fact, it seems officers had been expressing concerns to TCSO management before the facility even opened its doors April 25. According to the July issue of The Baton -- the monthly newsletter of the Travis County Sheriff's Officers Association -- Central Booking supervisors had "voiced concerns for the safety" of officers many times in the months leading up to the move. The officers' main concerns were that the new design of the building, which features "direct supervision" (that is, incoming detainees all sit together in an open area while waiting to be booked), would jeopardize officer safety, and that officers had not been adequately trained in the new procedures for processing the inmates.

"We got a lot of untrained officers two weeks to two days before we moved," Lt. Belinda Redpath told The Baton. "They were already stressed about being there and didn't know what to expect or what to do." Major David Balagia, who is in charge of the new facility, told the newsletter that officers did get enough training in the new booking procedures, including how to identify potentially volatile prisoners and process them first. "There was a lot of training that went on for two years before we opened," he told The Baton. However, the newsletter notes, most of those officers were transferred to other assignments before the new facility opened, and other officers currently assigned to the facility told The Baton they were never trained at all. Indeed, within 48 hours of the facility's opening, The Baton reports, there were three officers assaulted by prisoners, one of them in the direct supervision area. But TCSO spokesman Roger Wade told the Chronicle that the department doesn't think there is an internal safety issue. "In general, the concerns about safety have been unfounded," he said. "There are no more problems with this [booking facility] design than with the other."

Nonetheless, the new Central Booking facility -- along with the Travis County Jail next door and the Travis Co. Correctional Complex in Del Valle -- failed the yearly surprise inspections by the Texas Commission on Jail Standards on May 7, just two weeks after it opened. Commission inspector Shannon J. Herklotz found that "Single Cells, Holding Cells, and Day Rooms are being utilized above their approved capacity" in the Central Booking facility. In all, the facility -- which has a 98-prisoner capacity -- was housing 224 inmates at the time of inspection, and had a ratio of one officer for every 58 inmates, well above the approved 1-to-48 ratio. Further, Herklotz noted, the new booking procedures were not being followed according to the "approved classification plan." (Herklotz also found that smoke detectors were not working properly and that the facilities were not being inspected according to the "approved Sanitation Plan." The place needs "extensive cleaning," he noted.)

Further, the July Baton reported, both Lt. Redpath and Sgt. Linda Hutchinson -- who had also expressed concerns about safety to The Baton in their May issue -- were transferred out of Central Booking shortly after airing their concerns. Redpath was transferred just two weeks after the facility opened, and Hutchinson was transferred shortly after the May Baton hit officers' mailboxes. Balagia said the TCSO has a three-year assignment policy and that Hutchinson was due to be moved -- she'd served six years in Booking at the time of her May transfer. Still, Hutchinson told The Baton she found the timing of the transfer -- on the heels of her well-voiced concerns -- suspicious. "I guess my time was up, so to speak, but the timing of the announcement sure was a coincidence," she told The Baton.

For his part, Balagia said that the idea that the transfers were retaliatory is unfounded. "I don't know how to put this without sounding negative, but it's just ridiculous," he told the Chronicle. "I'm not going to talk about it any more because it's counterproductive."

Meanwhile, the Texas Commission on Jail Standards has asked Sheriff's Office representatives to attend their next meeting, Aug. 2, to address the deficiencies found during May's inspection, said the commission's Executive Director Terry Julian. "We need them to tell us how they are going to address these issues of noncompliance," he said. "I'm really concerned about their shortage of staffing. They just can't seem to keep their staff."