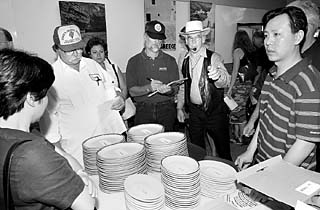 On the block: The July 14 auction of the contents of Ted's Greek Corner restaurant, owned by Eleftherious "Ted" Sofikitis, and a Congress Avenue landmark for 30 years. The building is to be razed for a planned new office tower, start date undetermined. (Photo By John Anderson)

FAREWELL TO ECB "Austin Stories" is a little out of tune today, and not just because we've shaped the pieces to a slightly different format. Our colleague Erica C. Barnett, the Chronicle's senior news editor and "Austin Stories" creator and voice for many months, is moving on. After more than three years at the Chronicle, Erica is heading to the Great Northwest for a job at the Seattle Weekly.

Erica joined the Chronicle as an intern in the spring of 1998, but was soon writing for virtually every department in the paper. Her first feature, "Withering on the Vine" (a profile in contrasts between Austin Community Gardens and the Sustainable Food Center) exemplified her eye for specific community insight and the larger context of a local story.

In the Politics department, Erica worked previously with editors Audrey Duff and Amy Smith, covering stories ranging from the death penalty to neighborhood feuds, from runaway developments to the political deals that made them possible, while keeping consistent attention on inner-city Austin's longest neighborhood streetfight, the expansion programs of Hyde Park Baptist Church. As Amy put it succinctly, "Erica will certainly be missed."

Indeed, we will all miss her energy, intelligence, and engagement in the life of the Chronicle. We wish her very well indeed.

RETURN TO TULIA For residents of the once-sleepy Texas Panhandle town of Tulia, the second anniversary of the controversial July 23, 1999 drug raid that targeted 10% of the town's black population is a perfect time to remind the nation that Tulia's troubles aren't over.

In an effort to raise morale among arrestees and their families and to bring attention to a Department of Justice investigation, the Tulia-based Friends of Justice are joining other groups to bring people to Tulia for a rally and march Sunday, July 22. Organizations joining in the action include the National Association for the Advancement of Colored People, the American Civil Liberties Union, the Drug Policy Forum of Texas and the Texas Network of Reform Groups, among others.

On Saturday, July 21 at 11pm, buses of Austin activists and supporters will take a Freedom Ride to Tulia, carrying along such items as school supplies for children affected by the arrests of their parents. A "Never Again!" rally is scheduled for Sunday evening, July 22, in Tulia's Conner Park, and will include a concert and speakers: Will Harrell of the Texas ACLU, G. Alan Robison and Jerry Epstein of the DPFT, Tracey Rochelle Hayes of the TNRG, and Freddie Brookins of the newly formed Tulia NAACP. Following the rally, the group will march to the Swisher County Courthouse and jail, where a candlelight vigil will be held into the early morning hours of July 23.

The raid resulted in the arrests of 46 people -- 39 of them African-Americans -- but virtually no evidence. Twenty of those who pleaded not guilty were convicted on the uncorroborated testimony of a single undercover agent and received sentences ranging from 20 to 300 years.

Tracey Hayes of Texas Network said the Tulia episode has become a bridge for those interested in drug law reform to work with people who have been directly affected. "This is not just activism anymore," Hayes said. "It's more like the civil rights movement. It's ordinary citizens who have had enough."

For more information about the Austin Freedom Ride, call Tracey Hayes at 493-7357. For the story of the original Tulia raid, see "Color of Justice" by Nate Blakeslee (austinchronicle.com/issues/ dispatch/2000-07-28/pols_feature3.html).

ON EXTENDED KNEE The APD has named former city of Victoria spokesman Paul Flaningan as the new head public information officer for the department. On June 11, Flaningan, 29, took over the spot vacated in May by Sally Muir, now an aide to Chief Stan Knee. At a Tuesday press conference, Flaningan said he hopes to strengthen communications between APD and the community.

This marked the first of what Flaningan says will be monthly half-hour press conferences with Chief Knee. The conferences will be "themed" Knee said, but will also be open to "ask about anything that is floating around out there." Assistant Chief Mike McDonald has been assigned to oversee the public information office to make sure there is no "inequitable treatment of news media," Knee said, "or favoritism of reporters."

As for Tuesday's theme: Knee said that property crimes are up 1% this year, fueled by an abrupt 28% jump in auto thefts. While violent crimes are down 3%, the department estimates 3,490 cars will be stolen in 2001, the highest number in nearly three years. Hot spots for vehicle theft, according to APD maps, are centered at Pleasant Valley Road and Riverside Drive in Southeast Austin, Cameron Road and Koenig Lane in the northeast, and, perhaps ironically, near East Seventh Street and I-35, just steps from police headquarters.

Also, the APD has submitted its proposed budget for FY 2002, requesting nearly $142 million, up almost 13% over this year. Much of the increase is intended for hiring new officers -- the department hopes to add 66 new cops to help staff positions added to the new Downtown Area Command and the Alcohol Control Team, as well as to offset nearly 40 vacancies expected through attrition.

RAMPING UP I-35 When people describe I-35 as a giant parking lot, they're generally talking about the main lanes crowded with semi-trailers and other through traffic. But East Austin neighborhoods adjacent to the freeway foresee another nightmare scenario -- a crush of local commuter traffic along frontage roads -- if the state builds the next version of I-35 according to its latest design. The Texas Department of Transportation (TxDOT) is in the final planning stages of an I-35 improvement project through Central Austin that will widen the lower deck, convert the upper deck to HOV lanes, and rearrange interchanges.

TxDOT's current schematic shows no off- ramps for southbound I-35 along a roughly three-mile stretch between 51st and 15th streets, and the northbound (or east) side of the freeway would have just one exit, onto 38th through the same corridor. At first blush, the lack of local connections would seem to protect adjacent neighborhoods from exiting traffic. But that stretch of I-35 runs past several major destinations: There's a hospital, a shopping center, thousands of potential new homes at the redeveloped Mueller Airport, and -- oh yeah -- the biggest university in the country.

As things stand now, Longhorn-stickered cars, shirt-and-tie commuters, and ambulance drivers would conceivably all compete for room down miles of highway frontage road. Eastside residents would have to negotiate a raging swirl of lane-switching, U-turning traffic just to get out of their front yards.

The good news is, TxDOT is listening to neighbors' complaints. At a design charrette Saturday, July 14, representatives from the department and the contracted engineering firm, Earth Tech, met with neighborhood leaders to discuss exit ramps that could possibly be added at 26th Street or Manor Road to funnel traffic more efficiently onto the UT campus. Significantly, the University of Texas' vice-president of planning, John Rishling, was also on hand -- UT owns much of the land that would be needed for new exit ramps.

Design charettes are informal and non-binding, but as the morning progressed, participants were beginning to nod in satisfaction over a sketch showing looping exit lanes extending off southbound I-35 between 26th and Manor, possibly connecting to Red River, and off the northbound side connecting to 26th. UT would have to give up its practice football field to accommodate the west-side ramp, but that loss is nearly a foregone conclusion, since when TxDOT widens the freeway it will probably have to take that land to avoid the Mount Calvary Cemetery on the east side.

TxDOT also believes it may be possible to preserve a northbound exit ramp onto Airport Boulevard, at which the department had previously balked because the ramp would encroach tightly on the St. George Episcopal Church. But Eastside neighbors just south of Airport, in Cherrywood and Wilshire Woods, say the ramp is crucial for preventing future traffic heading for the proposed Mueller redevelopment from flooding their streets. Project manager Charles Davidson says he believes the ramp is physically feasible, but TxDOT will have to determine if it would be used heavily enough to justify the added cost. -- Kevin Fullerton

WINNERS AND ... The Chronicle is delighted to announce that Senior Editor Robert Faires collected a Second Place Award for Arts Criticism, for large circulation newsweeklies, at last week's convention of the national Association of Alternative Newsweeklies in New Orleans. The judges praised Robert for his "enthusiasm, lucidity, and sound judgment." Columnist Michael Ventura won Second Place for Column Writing, with praise for his exploration of "meaning-of-life issues … with confidence and style."

And we are also (slightly grudgingly) pleased to note that Senior Editor Michael King (former editor of The Texas Observer) won First Place for Arts Feature for small circulation papers, for his profile of playwright Edward Albee, published in the Observer last year. His was among several awards for the Observer -- also to Nate Blakeslee, Greg Harman, and photographer Alan Pogue. Blakeslee won two first-place awards, for investigative reporting and news story, and a second-place award for media reporting (details at www.aan.org).

Chronicle Editor Louis Black achieves his inimitable sartorial style (and more importantly, how to avoid it) should check out the article "Ten Mellow Years: I Married a Slacker" by ever-enduring spouse Anne S. Lewis, in the July 18 edition of the Wall Street Journal.