How did Texas Monthly's Paul Burka, a Democrat, end up becoming one of George W. Bush's biggest fans in the press corps? 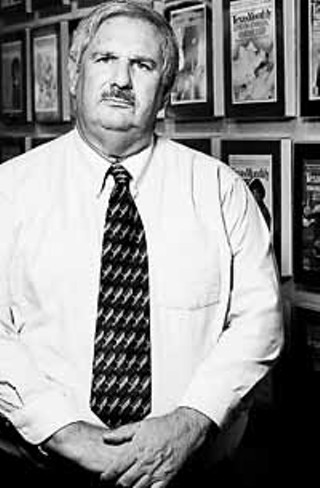 Paul Burka is a Democrat who started his career working for legendary Texas Senate liberal A.R. "Babe" Schwartz of Galveston. At Texas Monthly he's written incisive and impassioned pieces about Texas's poor, its schools, its environment, and the troubles all have faced. How did he end up becoming one of George W. Bush's biggest fans in the press corps? And did he mean to? And what does he think now?

"I know there's a real issue about we at the Monthly, and especially me, becoming too friendly to the Bushes," Burka says. "I know that in some quarters that perception existed. But I think the record shows that George W. Bush was a very good governor. And I was the first to say, after his first legislative session, that his political prospects were limitless. And they were."

Both Burka and Evan Smith point out that, in Smith's words, "we were criticized for being in Ann Richards' pocket before we were in George W. Bush's pocket. When people say my good friend Paul was soft on Bush, I tell them he wasn't any softer than he was on Ann." Says Burka, "We liked Ann. I liked Ann. I voted for her against Bush. I told Bush that. I thought she was a good governor and deserved to be re-elected, and I told him that if he was a good governor then he deserved to be re-elected. But at the same time, I wrote a piece saying Ann was going to lose." (That ran under the cover line "Ann vs. Ann.")

Having said all that, Burka is well aware that the only president we've got has lost almost all the glow and sheen he had during his full term as governor. "I didn't realize how his weakness would play out in a presidential race," he says. "He doesn't like to do homework, he makes snap decisions that come back to haunt him, and if he's not interested in an issue, forget it.

"So now there's a whole colony of people surrounding our [state] Capitol that are surprised Bush looks so dumb. The intellectual left was never surprised, but inside the Bush orbit he seemed pretty phenomenal compared to Dolph Briscoe or Preston Smith or Mark White or Bill Clements, or even Ann as far as the Legislature was concerned. His flaws were not noticeable at close range, and the Lege was much too docile to point them out. We did miss something, but I'm not sure what it was."

Burka says, though, that he had an inkling during the campaign that the Bush Express wasn't going to have the smooth ride envisioned by the governor's Texas acolytes. "The piece that drove everybody crazy was our big cover profile in July 1999 ("The Life of George W. Bush,") and I had the last part, which was about his personality, and really, what's not to like? But I came back from the Iowa straw poll (that same summer) very doubtful. It was very clear that the bigger the hall, the smaller the man. Dan Quayle gave a better speech."

Burka only made three trips with the Bush campaign before the New Hampshire primary -- the straw poll, a foreign-policy address at the Reagan Library in California "which was also weird," and a New Hampshire appearance "after which I thought: He's in big trouble. But I didn't get to write about it, because there really wasn't any place in the magazine for me to get in these impressions." That's one reason why Evan Smith, who took over as editor before the GOP convention, wanted Burka to take over "Between the Lines."

"And there I think I blew it," Burka says. "My instincts were up, but we did a strategy piece -- how Bush could win -- instead." Although that piece was accompanied by a series of counterpoints -- under the headline "But You'll Be Sorry" -- by Texas liberal all-stars, including Richards, Garry Mauro, and Jim Hightower. "With what we know now, we should have done a piece on 'Is George ready?' I didn't trust my own instincts."

So is it too late for Texas Monthly to retract? All Evan Smith will say is "I'm glad the election's over."