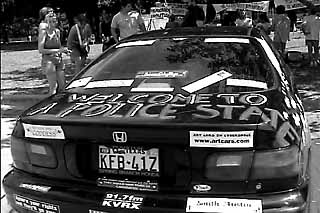 Activists with the Democracy Coalition were painting this art car, owned by Coalition founding member Debbie Russell, in Zilker Park on July 4 when they were apprehended by park police and told to stop painting and remove the car. The art car, which Russell wants to enter in a Houston art car contest later this year, was painted in red, white and blue. (Photo By Pam Thompson)

It started out as a joke. "Isn't Austin's Growth GREAT?" said the full-page ad, which ran in the Chronicle last November. The ad -- aimed none too subtly at the $25 million carrot the city would soon offer software company Vignette to hasten its move downtown -- listed a number of problems associated with such incentives and concluded, "Maybe growth isn't so great. Maybe it's time to take back our town." And there, down at the bottom, was the mysterious group responsible for the tirade: Taxpayers Against Corporate Subsidies, or TACS.

Turns out TACS wasn't real, at least not then. The "group" was dreamed up by Save Our Springs Alliance Board Chairman Mark Tschurr last year, at a time when the City Council was handing out corporate subsidies like Halloween candy to anyone with a bank account and a business plan. But with Tschurr stepping down from his post at SOS -- and with corporate subsidies like the $95 million package the city is offering AMD still a source of heated debate, at least outside City Hall -- TACS will soon become a reality.

Tschurr (who's previously demonstrated his acronymic acumen with groups like Austin Business Leaders for the Environment [ABLE] and the Stratus Information Group [SIC]) says subsidies are too big an issue for environmental groups like SOS to shoulder alone. "One of the things I focused on [as SOS chair] was to get the organization to focus on its core principle, which was protecting [Barton] Springs, instead of deluding itself by involving itself in so many other things, like light rail and getting along with the council," Tschurr says. The SOS board will be helmed by longtime Austin enviro Kirk Mitchell, who last marshaled the SOS troops in the days when Bruce Todd and Eric Mitchell still strode the council dais.

In the short term, Tschurr says TACS' goal will be to educate citizens about the true cost of corporate subsidies -- a cost that he says includes not just the cost of tech company incentives, but the decline in Austin's quality of life that ensues during economic slowdowns. "AMD expanded out here because they couldn't afford to attract people in San Jose, and [the city's] doing the same thing here that caused the problems there," Tschurr says. "The quality of life is diminishing, the cost of living is increasing … and yet we've got a city that's looking at [giving] $200 million [total] in subsidies" if the AMD deal goes through. "The best thing the city can do is to keep the cost of living low and provide services … so that during a downturn, when people get laid off, they don't have to move immediately. Then, when the market picks up, they're available." Which brings Tschurr to TACS' long-term goal: a ballot referendum that would force the City Council to win voter approval before offering fat incentives to companies like Intel, Vignette, and Computer Sciences Corporation.

Tschurr says he'll remain an active member of SOS, which just signed a yearlong contract with local consulting group Grassroots Solutions, i.e., Mike Blizzard and Richard Fawal. Blizzard and Fawal, not coincidentally, will also be running the PR shop over at TACS, which Blizzard helped conceptualize…

Last Monday, Sapient -- a "business and technology consultancy," according to its Web site -- announced that it would be "reducing head count" by nearly 14% (about 390 jobs) nationwide, including most of the employees at its Austin office. While company officials won't discuss the actual number of folks being laid off here, they adamantly deny rumors that the entire office will be shut down. "That office is not closing; there are still ongoing projects there," says Ingrid Ekstrom, a Sapient spokeswoman in San Francisco. Sapient isn't saying what happens when those "ongoing" projects come to an end, but chances are that whether the office "is closing" is an issue of semantics, not factuality. Employees at the Austin office say they were told before the July 2 public announcement that the office would be closing down.

Sapient acquired Austin-based Human Code, which makes educational games, in 2000. In a taped conference call with investors on July 2, Sapient co-chairman and co-CEO Jerry Greenberg said the company has decided to get out of the gaming business altogether. "It hasn't played out the way that we thought," Greenberg said. Sources close to Sapient's Austin office say nearly 60 employees will lose their jobs. Meanwhile, a bust in Austin may be a boom for Sapient's office in New Delhi, India, where the company continues to increase their "head count." Sapient spokespeople confirm that the company is beefing up the New Delhi office in response to "the restructuring of the business in line with a global strategy." But, Ekstrom admits, cost is also driving the bus. "It is cheaper in some ways, yes," she says…

Economics at City Hall have few rules that can't be bent to please one constituency or another, but one principle remains steadfast: In lean budget years -- like the one facing the City Council in 2002 -- those who have get to demand more from those who have not. This year, that means the council, which wants to fund social equity initiatives, public improvements, and the like, will have to answer the demands of Austin Energy, which annually contributes more than $60 million in revenues to the city's general fund.

City Manager Jesus Garza, whose draft policy budget released June 29 paints a bleak picture of the city's financial fortunes, says the utility would probably be willing to give more -- but only if the council passes a set of resolutions that would exempt Austin Energy documents containing sensitive information such as fuel contracts and operating costs from open records requests. Every other city in Texas that owns an electric utility has passed similar rules in preparation for utility deregulation, but Austin's leaders have been more reluctant to shield its utility's records from public view. Environmentalists and consumer advocates say access to utility records has helped them persuade AE to pursue progressive strategies that have made it a leader in renewable energy investment while keeping its rates among the lowest in Texas.

Why the rush to pass the resolutions? Although the city has no plans to open the utility's market to competition any time soon, AE says it needs to keep some records secret so it can negotiate the lowest prices from coal and natural gas suppliers. And Garza, who as city manager is effectively the utility's top brass, is determined to bring the matter to a close. In his draft budget, Garza tells the council that "[a]dditional funding from Austin Energy (for social equity and similar initiatives) can only be justified if we protect the utility's competitive environment. …" AE spokesman Ed Clark says the confidentiality provisions proposed by the utility are the least restrictive of all such rules in place at other public electric utilities in Texas.

But Council Member Raul Alvarez, who in March proposed passing the secrecy resolutions only if the city hired a consumer advocate to watchdog the utility, says that balancing the needs of neighborhoods against the public's right to information won't be easy. "We need to adequately weigh all these issues before taking a strong position one way or the other," says Alvarez.

Longtime Sunday-morning staple Anne Morris has stepped down as books editor for the Austin American-Statesman, after what some are calling a section-wide housecleaning by feature editor Jeff Salamon, who took over the daily's entertainment division last year. Taking over, at least temporarily, is Patrick Beach, who's written engagingly on the daily life of a meter reader, the oldest person to run the Capitol 10K, and -- of all things -- vultures. Is the Statesman throwing away its best writer to avoid paying for an editor with Morris' experience? Managing editor Fred Zipp, who returned a call made to Beach's office last week, thinks that's a bit harsh. "We think it's a good use of his talents," Zipp says. As for qualifications, Zipp says Beach, who has never been an editor at the paper, is "a voracious reader and a prolific reviewer."

Salamon, who did answer his phone, adds that Beach "was chosen because he's a smart guy who's written well on books for us." But he acknowledges that the decision to hire from within had as much to do with the paper's ongoing hiring freeze, in effect since this spring, as it did with Beach's editing proficiency.

What all this means for the future of the Statesman's books page is still far from clear. So far, the only notable casualty is Morris' column, which ran every Sunday. Zipp was vague about what changes are in store for the section, offering only that "we are committed to improving the books page just as we're committed to improving the rest of the paper." But with the Statesman's best feature writer on the bench until further notice, the daily could soon look even more like your same old Statesman…

If you're concerned about the future of reproductive services at Brackenridge Hospital, run by Catholic Church-affiliated Seton Healthcare Services, you're not alone; the company's decision to further disassociate itself from services such as birth control and sterilization has many in the city wondering where women -- especially poor women -- will turn for routine reproductive care. If you'd like to find out more about what you can do to protect reproductive freedom in Austin, the city is holding a public meeting on Wednesday, July 18, where you'll be able to listen to elected officials' suggestions, ask questions, and offer solutions. The meeting starts at 6pm in Room 104 of the Waller Creek Building at 625 E. 10th…

On a personal note (the first and last, I promise), this will be the last edition of "Austin Stories," at least in its current incarnation, because I'm moving to Seattle. Thanks to everyone who's helped me along the way during my three years writing for the Chronicle; I'm going to miss this place.