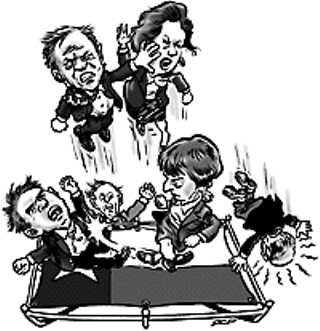 Marty Akins passed through town last week, bringing his extremely early Democratic gubernatorial campaign to a small East Austin church. The venue may have been more than usually symbolic -- Akins, a former UT quarterback, begins his stump speech by recalling that he roomed with black players during his football career, which culminated in 1975 with All-America honors. Akins says he did so -- despite death threats -- in the interest of team unity and to make a statement against segregation, and that the episode shows he's ready to make the tough decisions required of a Texas governor.

Well, maybe -- although a white man recounting his willingness to associate with black folks no longer has quite the heroic ring it may have had a generation ago. (One wonders if the anonymous African-American players were as delighted with the quarterback's company as he was with theirs.) Akins' speech, to a small audience dotted with reporters, was otherwise unremarkable. He went after Perry and the Republicans with zest ("They're capitalists when they're making money and socialists when they're losing money") and declared himself pro-choice, anti-vouchers, pro-education, and anti-tort reform. The latter might be understandable, since Akins is a plaintiffs' lawyer, although his reasoning -- "tort reform doesn't help anybody but corporations and big business" -- remains sound.

Although he did not mention his likely Democratic opponent by name, Akins staked out a rhetorical position slightly to the left of designated billionaire apparent, Laredo's Tony Sanchez. That's not difficult, as, to the narrow extent Bush-booster Sanchez has declared himself, he is either a conservative or extremely conservative Democrat. But when asked how he expected to pay for necessary programs in education and health care and the environment when the state budget is already overstrapped and the tax structure archaic, Akins answered, "We just need to run it like a business. The money's there -- there's no need to raise taxes, but just set the right priorities."

Texas politicians have been selling that fool's gold for some time, so it's churlish to suggest a rookie should put his neck in the income tax noose. But the oddest thing Akins said was his passionate declaration that he was the right man for the job because being governor would be "second to what I've already accomplished on the football field." This was apparently intended to reassure his audience that he's in the race for the work and not the glory. It's true plenty of orangebloods would judge the descent from UT quarterback to governor a considerable demotion. But it's generally considered unseemly to remind the voters that in the state's priorities, gummint ranks well below football -- and then endorse the notion.

The best guess is that Sanchez, when and if he declares, will quickly spend Akins into oblivion. Will he retain a remnant of the progressive policies Akins is promoting? Maybe.

The other declared candidate for the Democratic nomination is Houston attorney John WorldPeace, who changed his name to proclaim what he stands for. WorldPeace (like his namesake) hasn't got a prayer, but he's set a helpful precedent. Should it catch on, the voters might have some useful clues when they enter the booth.

Assuming Hutchison demurs, there's been some talk of Sen. Phil "The Bankers' Best Friend" Gramm -- woefully downcast after losing his committee chairmanship -- retiring to curmudgeonly oblivion. Don't bet on it. Gramm is running, with bottomless bucks, and the question is, does any Dem (other than Sanchez) have access to the kind of money it would take to unseat him? Probably not -- although Mayor Kirk "Still Looking" Watson and Dem Chair Molly Beth "Here I Am" Malcolm have both been mentioned. Last week, former AG Dan "Remember Me?" Morales made some preliminary noises about a run (defying a looming tobacco litigation indictment). With Sanchez presumably on the ballot, Morales might well be Gramm's worst nightmare.

Closer to home, Kirk "Window Shopping" Watson remains likely to run for something, although until Republican dominoes start falling we may not know what. He reportedly would prefer Attorney General, but incumbent John "Silver Crown" Cornyn remains in the way, which leaves Dewhurst's Land Commissioner slot, where Republican contenders include former Sen. Jerry "Handgun" Patterson and current Dallas Rep. Kenn "Hey, I'm Rich Too!" George. There was talk that Cecile "Freedom Network" Richards might take a shot here, but she has reportedly rejected the prospect of attempting to raise $3 to $4 million for an essentially bureaucratic venue.

Don't let that discourage you. If you've got few million to spare, you too could be a Texas state officeholder. Just remember, many are called, but few are chosen -- and it's the money primary that matters.