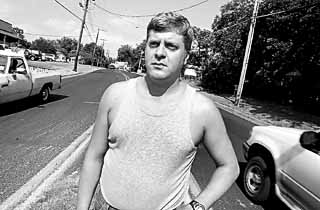 Cherrywood resident Mark Lind, whose family goes back three generations in the area, wants to see shopping, bicyclists, and pedestrians on Manor Road -- not four lanes of traffic. (Photo By John Anderson)

Over the years, retirees in the Blackland neighborhood, located just east of I-35 between Manor Road and Martin Luther King Jr. Boulevard, haven't had much to discuss with their neighbors to the north in Cherrywood. Blackland residents refer to the gentrifying area as the "Internet Nation," a mix of Dell employees, architects, and artists where property tax appraisals have risen as fast as anywhere else in the city. For their part, Cherrywood residents have had little regard for Blackland, where time seems to have stopped around 1955. Manor, the commercial strip that divides the two neighborhoods, might as well have been the Rio Grande.

But when building designer Mark Lind, whose family goes back three generations in Cherrywood, gazes down Manor, he sees the same vision that retired state employee Bo McCarver sees from his block on the opposite side of the street: public spaces, shopping and dining, cyclists and pedestrians. In recent months, the neighborhoods have done a lot of talking, and bonds are forming as both communities prepare to defend against the onslaught of traffic that the future Robert Mueller Airport redevelopment will bring to their streets. This might be just another case of neighborhood fist-waving over the crush of progress, except for one ironic detail: These neighborhoods, particularly Blackland, already represent the future that the city of Austin claims to be chasing.

A casual observer driving the short two-lane strip of Manor from the interstate to Chestnut might see a struggling commercial zone of shabby apartments, soul food, and garages. But locally owned restaurants with citywide appeal -- Hoover's, Calabash, and the Eastside Café -- have gained a hold here, too, as have coffee shop Gaby & Mo's and the Vortex theatre. The corridor is the closest thing East Austin has to an urban village, and it was developed without a dime of city assistance. But it could be so much more, says McCarver, a board member with the Blackland Community Development Corporation.

McCarver stands at the triangular confluence of Manor and 26th Street and describes how the Blackland CDC is poised to take over half the block bounded by Chicon and Poquito, hoping to partner with another developer to build a retail strip with apartments on the second floor. Across the street, on the island between Manor and 26th now occupied by a mechanic's shop, McCarver pictures a public plaza. Along Manor, he sees bike lanes running west to the University of Texas.

And then there's the official plan. Earlier this month, the City Council approved a transportation plan that recommends Manor be widened from two lanes to four along the stretch of road where McCarver stands. No money has been allocated for the project, which is probably at least 10 years away, but city planners say development on the 700-acre former municipal airport, whose southern edge abuts Manor, could potentially create more than twice as much traffic on the arterial as it had when Mueller was open.

The Blackland CDC pioneered what the city now proudly calls Smart Growth in its own backyard more than 15 years ago, when it converted a quarter block on Salina into a complex of six homes for elderly residents arranged around a central courtyard. Back in 1985, says McCarver, such traditional village design required hours of arm-twisting in city offices. Blackland has also learned a thing or two about neighborhood preservation, having thwarted an Eighties-era push by UT to expand into the area by buying Blackland residents' homes out from under them. The CDC bought up dilapidated homes and unused lots and brought the university's encroachment to a halt. Blackland has been restoring its houses and filling in vacant lots ever since, creating a haven of stability for poor families that's extremely rare in Austin.

Now, says McCarver, the neighborhood wants to spur job growth along Manor for the younger families who are settling in Blackland. He knows the current City Council would balk at the prospect of destroying Manor's potential through a widening project such as the one in the transportation plan, but as long as that design is on the books, McCarver says, Manor's future is at the mercy of traffic engineers. "Will this council be here in five years, in 10 years?" says McCarver. "I think they created a monster."

Manor is a crucial component in Cherrywood's designs for self-determination, too, but for a slightly different reason. With its tree-covered streets, bohemian flavor, and mixed incomes, the neighborhood may be the next Hyde Park in the making, and Manor could be the neighborhood's Duval. But unlike Blackland, which will have many rounds to fight before bulldozers appear on their lawns, Cherrywood is besieged by a more imminent threat.

By the end of this year, TxDOT hopes to finalize its redesign of the I-35 segment between Town Lake and 51st Street. Preliminary plans show that TxDOT intends to do away with the existing northbound exit ramp that connects with Airport Blvd., which forms a natural link to Mueller, but leave an exit south of 381/2 Street, which cuts through Cherrywood. Neighbors fear that not only East 381/2, a relatively quiet arterial only two lanes wide at its west end, but other neighborhood streets running east would become the preferred paths to the redeveloped airport.

Lind, who serves on Cherrywood's transportation committee, is boggled at the thought of all that new traffic. Driving down Wilshire Blvd., an unpainted, gently curving street just north of 381/2, Lind approaches Patterson Park, near the intersection of Wilshire and Airport. "Picture this as traffic off I-35 is hauling ass down by this park," says Lind. "And what's going to keep them from doing it? It's all because TxDOT won't do the logical thing." That, in Lind's mind, means redesigning the I-35 configuration at the intersection with Airport to allow northbound traffic to exit there and follow the wide six-lane to Mueller, rather than forcing everyone off in Cherrywood. But TxDOT engineers say the "logical thing" isn't so easy to do.

I-35 project manager Charles Davidson says that I-35's widened footprint won't leave room for the exit ramp that currently links with Airport without running over the St. George Episcopal Church, which sits right beside the existing ramp. Nor can engineers build a ramp north of 381/2, he says, because exiting vehicles would run right into the railroad tracks just south of Airport. Davidson says that TxDOT would gladly build the ramp to Airport and relieve the pressure on neighborhood streets if it were feasible.

What is feasible is precisely the issue. Cherrywood resident Girard Kinney, the architect who designed the new pedestrian bridge over Town Lake, says TxDOT could tunnel I-35 and the exit ramp underneath the railroad tracks, leaving plenty of room to join up with Airport. That would cost considerably more money, Kinney acknowledges, but it's not out of the question if TxDOT really wants to do what's right for East Austin. "They have the expertise to do this," says Kinney. "If someone said to them that it was their job to do it, they'd be up to the task."

The Cherrywood and Blackland neighborhoods know they cannot escape becoming a conduit for Mueller redevelopment traffic. But neighborhood leaders say the plan being put together by the five neighborhoods that comprise the Upper Boggy Creek Neighborhood Planning Area will call for new traffic to be distributed over many streets rather than dumping it on two or three roaring arterials. That's consistent with the stated intent of the master plan drawn up for the Mueller redevelopment, which recommends 15 different access points to minimize traffic on any one street.

Officials in the city's Transportation, Planning, and Sustainability Dept., meanwhile, say it's too early to tell what new designs will be necessary for those roads, but, in arguing for leaving widening projects in the city's long-range plans, staff told the council it was best to leave all options open, even if the city decides to just add sidewalks or bike lanes.

That may seem pragmatic, but it hasn't done much to further the already rocky relationships between neighbors and the city. Lind says in all his years living in Cherrywood he only knows of one public improvement: a sidewalk down 381/2 from Maplewood Elementary to Airport. Efforts to clean up Boggy Creek and install traffic calming devices have attracted no attention from the city, he says. "It would be easier to take our medicine if they'd just give us that spoonful of sugar," says Lind, referring to the inevitable traffic burden Cherrywood will have to shoulder in the future. "But so far, they haven't given us any at all."