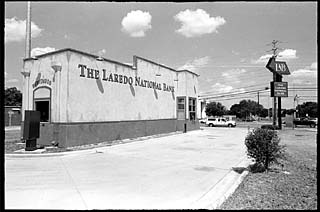 Laredo National Bank, one of the most heavily scrutinized banks in recent Federal Reserve Board history, has made its entry into the Austin marketplace -- opening its doors for business in one of the last places you'd expect to cash a paycheck. An abandoned hamburger joint in South Austin is the newest branch location of Laredo National, a border-town financial institution with assets of $2.5 billion and a reputation as deep and colorful as the mustard-yellow hue that has replaced the faded façade of Roland's Hamburgers.

Neighbors had grown so accustomed to the old Roland's eyesore, where vendors hawked curios and faux Persian rugs on weekends, that the sudden bold conversion of the little building at Manchaca Road and Stassney Lane seemed to jolt the drab intersection awake. In the days leading up to the bank's June 1 opening, the striking makeover had become a conversation piece for customers at the nearby bakery, the lube shop, and the stark-white Guaranty Bank, which had enjoyed little competition in the neighborhood until the yellow box with red and blue trim popped up across the street.

What neighbors likely didn't know -- and didn't read in the local daily -- was the big news that came out of Washington the day before the branch opened for business. Laredo National Bancshares, the holding company of Laredo National Bank, had reached an out-of-court agreement with the Federal Reserve Board, effectively settling charges that the bank's controversial chairman, Carlos Hank Rhon, a prominent Mexican financier, had engaged in illicit banking activities in his acquisition and control of LNB, via his Virgin Islands-based holding company, Incus Ltd.

The Fed's case against Hank Rhon, as detailed in several major newspapers, was based on nine alleged violations of the Bank Holding Company Act and other U.S. laws. Among other things, regulators claimed that Hank Rhon illegally transferred shares of the bank -- via his holding company in the Virgin Islands -- to private investors and to his father, Carlos Hank González, a prominent Mexican politician who served in various posts under the Institutional Revolutionary Party. The Fed also claimed that Hank Rhon violated lending rules when one of his companies in Mexico received a $3.4 million loan from Laredo National Bank, according to a June 1 account in The New York Times. Additionally, Hank Rhon was accused of withholding information from the Fed concerning his connections to certain offshore investments.

The settlement didn't come cheap. Hank Rhon will pay a $40 million fine -- the second-largest civil penalty ever imposed by the Fed, exceeded only by a $200 million fine in the notorious BCCI affair. Hank Rhon also agreed to resign from his chairman's post -- assuming the new title of "chairman emeritus" -- and he is barred from working in the U.S. banking industry without Fed approval.

But that's where the Fed's penalties end. Admitting to no wrongdoing under the terms of the agreement, Hank Rhon will retain his 71% stake in LNB, with his holdings placed in an independent voting trust.

The investigation leading to the settlement focused solely on U.S. banking laws, and not on prior federal probes into alleged drug smuggling and money-laundering activities linked to Hank Rhon and his father. But the Hank family's close ties to former Mexican President Carlos Salinas and his brother, Raúl, who was suspected of building his fortune from drug trafficking, may have made federal investigators all the more attentive to Hank Rhon and the Laredo bank.

The drug-related accusations involving Laredo National Bancshares have moved LNB and its president, Gary Jacobs, into offensive mode. Both the bank and Jacobs are pursuing at least two civil lawsuits seeking millions of dollars in damages stemming from the leaking of a 1999 draft government report compiled by the National Drug Intelligence Center, a division of the U.S. Justice Dept., which the bank insists was entirely inaccurate and unfair.

Apparently reinforcing the LNB's denials, former Attorney General Janet Reno refused to validate the report, acting at least partly at the urging of former New Hampshire Sen. Warren Rudman, one of a team of lawyers the Hank family hired to refute the allegations. Reno subsequently deemed the document "beyond the expertise and responsibility" of the agency.

"We intend to continue clearing the record," Jacobs told the Chronicle after the Federal Reserve Board settlement. And with one legal wrangle out of the way, Jacobs said the bank will renew its acquisition and expansion efforts that were shelved while the Fed pressed its case against the bank. In addition to the new Austin branch, LNB is entering the Dallas market with a new branch in the Oak Cliff community (the bank already has offices in Houston). "We're happy with the agreement. It takes us out of the acquisition penalty box," Jacobs said. He went on to say he had no idea how his bank and Hank Rhon became the target of a drug probe, but that "someone went to a lot of trouble" to try to bring down the bank. "You could write a book about this," he said. "It's surreal."

Apart from its high-profile legal battles, the Laredo bank appears ready to turn its attention to exercising its more favorable attribute -- serving low-to-moderate-income Hispanics -- in markets beyond South Texas. Jacobs, who speaks fluent Spanish, said he personally selected the South Austin location and the bank purchased the property in 1999. What made the site so attractive, he said, was demographic data pointing to a growing Latino population in areas west of I-35 and south of Ben White Boulevard, spanning east and west between South Congress and Westgate Boulevard. The area includes the Manchaca and Stassney intersection where the new branch is located. City demographer Ryan Robinson says tract-level data bear out this point, and adds that the area is also gaining a surprising number of first-generation Mexican immigrants.

As minority populations develop, another trend starts to take shape. One sign that a community's banking needs aren't being met is typically demonstrated by the number of pawn shops and instant-loan centers in the neighborhood. The area surrounding the new LNB branch comes close to fitting this profile, although these types of businesses have stopped short of overrunning the neighborhood, Jacobs said. "We happen to like lending money to the Hispanic community -- not as scores of people but as individuals. We don't care what the ethnicity is, frankly, but we just happen to be a Mexican bank."

Austin's population trends and LNB's reputation for niche marketing have not gone unnoticed among local industry leaders. "They've ridden the market and they've been a substantial major player," said Eddie Safady, president of Austin-based Liberty National Bank. "And the bank is well known for its work with the Hispanic community."

When asked what other Austin banks are aggressively targeting the Latino community, Stephen Skaggs, president of the consulting firm of Bank Advisory Group, paused for a few seconds. "No one comes to mind," he said finally. "They all print ads in Spanish, and they all want the Hispanic community's business. But the question is, have they identified the needs and are they serving the needs?"

Of the major players, Bank One Corp. is trying hardest to establish itself in Hispanic communities across the country, although it's no secret that the bank's focus is on the more affluent segment of the Hispanic population. Still, local leaders predict that Bank One may eventually establish a presence in Hispanic East Austin as a demonstration of its commitment to the community.

Even so, they'll have a steep learning curve, said Mike De La Garza, Laredo National's senior vice-president of marketing. "Other banks may advertise in Spanish," he said, "but we know what the Spanish means, and we know the culture behind the words." Similarly, Sonia Storer, assistant manager at the Austin branch (her husband, Trey Storer, is manager) said the new branch's appeal is the fact that it doesn't look like a bank. "We don't intimidate people who maybe aren't accustomed to U.S. banks," she said, adding that a barbecue pit will soon grace the bank's patio, and cookouts will provide a more casual atmosphere for customers.

Months before the LNB branch arrived in Austin, bank officials had tipped off the Hispanic Chamber of Commerce and asked Eliza May, the chamber's executive director, to keep the news under wraps. May, a Laredo native, said she had to restrain herself from shouting the news from rooftops. "I'm delighted they're here," she said. "My parents did business with Laredo National Bank, so I basically grew up in their lobby." May went on to say she wasn't surprised that federal investigators took such interest in LNB's activities. "Any bank that becomes successful in an economically distressed area is going to come under suspicion," May said. "It's naturally assumed that the bank didn't develop its business by working hard. It's assumed that the bank got rich off of drug money."

The settlement reached with the Federal Reserve Board suggests that there may be more to the rumors about the LNB and its former chairman than simply unfair assumptions. But last year Gary Jacobs insisted to Frontline that "... notwithstanding what you or someone may think about how much help his father may or may not have given him at one point in his life, all the businesses that I know of Carlos' -- all of his joint ventures, everything -- he has done on his own. His businesses are not commingled with his brother or his two sisters, or his father. His businesses are independent, and they have been independent for many, many years."

It's unlikely to be hot gossip on LNB's South Austin barbecue patio that the Fed was apparently unconvinced.