After Three Weeks, a Verdict 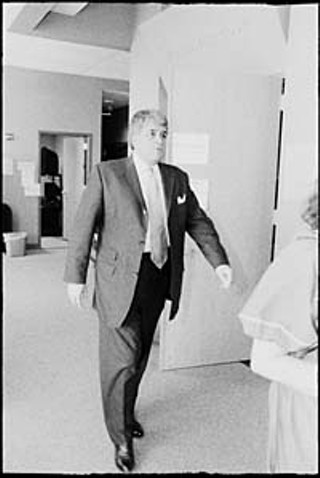 An agonizing, three-week trial ended with a gasp from victims' family members and muffled sobs from the jury box Tuesday when a Travis County jury convicted Robert Springsteen IV of capital murder in the death of Amy Ayers, 13; Eliza Thomas, 17, and sisters Sarah and Jennifer Harbison, 15 and 17, were also murdered on Dec. 6, 1991. The four girls were found stripped, gagged, bound, shot to death, and burned in a fire prosecutors said was designed to cover the crime at the Anderson Lane I Can't Believe It's Yogurt shop. Springsteen could face the death penalty in the punishment phase of his trial, which starts today, Thursday, May 31. The girls' parents left the courtroom hurriedly after the verdict was delivered at 4:05pm; only Barbara Ayres, mother of Sarah and Jennifer Harbison, had any comment for the press assembled outside the courtroom: "We wanted some kind of ending."

Springsteen's attorney, Joe James Sawyer, wasn't present when the verdict was delivered. But his partner, Berkley Bettis, said he had no regrets about putting Springsteen on the stand Friday, where he testified for nearly 50 minutes in his own defense. Springsteen reiterated his claim that he was not involved in the killings and that he knew nothing about them. Jurors and court observers expressed surprise when defense lawyer Joe James Sawyer called Springsteen to the stand. The courtroom, presided over by state District Judge Mike Lynch, was shrouded in a heavy silence for the next hour, with all eyes fixed on Springsteen. "Tell the jury," Sawyer asked his client, "did you participate in the killing of these four girls?" "No, I did not," Springsteen replied, looking into the jury box.

Most of Springsteen's testimony focused on his Sept. 1999 interview (conducted in his hometown of Charleston, W.Va.) with Austin Police Department detectives Robert Merrill and Ron Lara, during which -- after nearly four hours of adamant denials -- he finally confessed his involvement in the killings. The tape of the five-hour interview, which was played in court for the jurors two weeks ago, was pivotal in the case because the state lacked any physical evidence linking any of the defendants to the crime. The defense claimed that the 1999 confession was coerced.

Since 1991, Springsteen maintained that he was at the Northcross Mall on Dec. 6, where he says he attended the Rocky Horror Picture Show, as he did nearly every weekend. Springsteen testified that the detectives pressured him into confessing, insisting repeatedly that he was lying during the interview. Springsteen said he had only had six hours of sleep over the three days leading up to the interrogation, which he said disoriented him during the interview. "They said, you're not going anywhere until you tell us what we want to know, so that's what I did," Springsteen testified. "I kept creating things and they were leading me down the line to fitting it into the scenario they wanted." Springsteen said that he "gave up" on himself and began telling detectives the story he thought they wanted to hear. "What little I do know about the law in West Virginia is that there has to be evidence matching the crime," he told the jury. "I thought if I just make up a bunch of stories about what they want to hear that the evidence will show that it couldn't have been me. Come to find out the laws in Texas are much different." Indeed, under Texas law, a confession alone is enough to convict an individual, provided the statement is determined to be voluntary.

During cross-examination, Assistant District Attorney Robert Smith asked Springsteen about a series of details he gave the detectives that the state says only the killers could have known. Specifically, Smith asked how Springsteen knew that a .380-caliber semi-automatic pistol was used and how he knew that co-defendant Mike Scott had thrown up over a bridge after the murders. Scott, who also gave a statement to police in 1999 (he also maintains that his confession was coerced), told detectives the same story. "All these things that you know are just lucky guesses on your part?" Smith asked Springsteen several times.

"I wouldn't call them lucky guesses," Springsteen replied. Springsteen said he learned the details of the crime in the days following the murders from conversations with other teens that then frequented Northcross Mall and from the barrage of media coverage.

Sawyer and partner Bettis fought during the trial to introduce the testimony of Dr. Richard Ofshe, a professor of social psychology at the University of California at Berkeley, who studies police interrogations. The defense hoped that Ofshe would be allowed to testify that Springsteen's confession showed clear signs of coercion and compulsion by police; however, Judge Lynch decided to limit Ofshe's testimony to a general description of the techniques police use during interrogations. Allowing Ofshe to judge whether Springsteen's confession was coerced would be like "asking the jurors to forgo their opinions and rely on the doctor's opinion," Lynch said. (In fact, the jury was specifically told to consider whether Springsteen's statement was voluntary during their deliberations; if they determined it was coerced, they were instructed to disregard it when determining their verdict.)

After Ofshe's testimony, which was cut short due to objections by the prosecution, Ofshe told reporters he believed Springsteen's statement was tainted by the police. "There was improper, illegal use of interrogation techniques," Ofshe said outside the courtroom. "Springsteen was put in the position where he had to choose cooperation or be [considered] the leader or the target. That's what was going on. Was he coerced? In my opinion, yes."

The next defendant to be tried for the murders, Mike Scott, is expected to go on trial sometime in October.