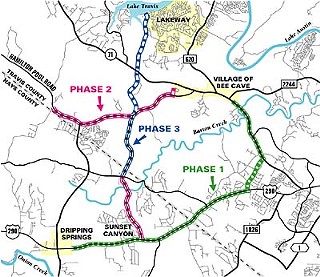 Phase I (which Judge Sam Sparks refused to halt with a preliminary injunction) is under construction, expected to be operational by November. It runs south along Hwy. 71 from a tank near the LCRA water treatment plant at Bee Cave, cuts southwest across open land two miles from the junction of 71 and 290, then borders 290 heading west into Dripping Springs.

Phase II (not yet approved) plans a second pipeline west from another tank fed by the Bee Cave water treatment plant, along Hamilton Pool Road toward the county line.

Phase III would travel south from Lake Travis to connect with the line in Phase I on 290, east of Dripping Springs.

The LCRA says that its plans are designed to serve already existing developments only. But pipeline opponents point to in-progress or proposed developments along these lines as the true interests driving the pipeline plans. "It's just not financially feasible," says Bill Bunch, "to go in and retrofit these areas [with water supply systems] that have been developed at traditional rural acreages."