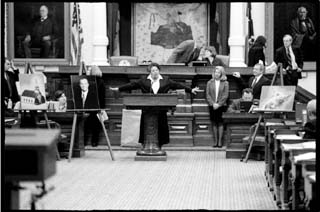 Rep. Senfronia Thompson, D-Houston, the House sponsor of the James Byrd Jr. hate crimes bill, addresses state representatives shortly before they approved the measure. An oversized photograph of Rep. Wayne Christian, who opposed the bill, rests on an easel to Thompson's right. Christian represents the town of Jasper, where Byrd, an African-American, was dragged to death behind a truck driven by three white men. (Photo By Jana Birchum)

If you've ever wondered where Texas hero Sam Houston would have stood on hate crimes legislation, a San Antonio lawmaker has the answer. "General Houston would have opposed the hate crimes bill," Rep. John Shields said, moments before casting his vote against the measure in the Texas House on Monday. "The general would agree with now-President Bush that every crime is a hate crime."

But Shields, like everyone else on the House floor that day, surely knew that Rep. Senfronia Thompson, D-Houston, already had her votes locked up on the James Byrd Jr. Hate Crimes Bill, just as she did in the 1999 session. This session's 87-60 vote included two Republican crossovers -- Buddy West of Odessa and Gary Walker of Plains -- who opposed the bill two years ago. Even conservative Pampa Rep. Warren Chisum voted for the measure after Thompson accepted his amendment to change the bill's language to designate homosexuality as a sexual "preference" rather than "orientation." The word "preference" is offensive to many gays and lesbians, but gay rights leaders say the language isn't worth quibbling over, particularly if the compromise improves the bill's chances of becoming law. As the House bill reads now, the measure would enhance penalties for crimes motivated by prejudice against a person's race, national origin, religion, or sexual preference. Before the House vote Wednesday, Thompson called on legislators to put politics aside and vote their conscience. "Sometimes we as members must gut up and vote for what's right so we can live with ourselves and be pleased with the image that we see in the mirror every day," she said.

The bill's supporters expressed optimism for passage in the Senate, but don't deny their fear that the bill could stumble, even though the proposal, sponsored by Rodney Ellis, D-Houston, cleared its first major hurdle when it passed out of a Senate committee earlier this session. The bill died in the Senate two years ago, a victim of presidential politics.

By most accounts last week, the bill looked as if it might fall victim to gubernatorial politics this time around. Gov. Rick Perry, who will likely top the statewide Republican ticket in 2002, opened himself to a storm of criticism when he stalled Senate action on the bill with two telephone calls -- one to Sen. Robert Duncan, R-Lubbock, and another to Todd Staples, R-Palestine. Duncan later told reporters that Perry had expressed his concern over the Senate moving forward on the bill with two Republican senators -- Tom Haywood of Wichita Falls and Florence Shapiro of Plano -- absent from the debate. Their absence provided Ellis with a 15-14 Democrat majority and a required two-thirds majority to bring the matter to the Senate floor.

Ironically, Shapiro, who opposes hate crimes legislation, was in Washington, D.C., to observe Holocaust Remembrance Day and to visit the Holocaust Museum. Haywood was visiting his son, who, according to the San Antonio Express-News, is battling AIDS in an Austin hospice.

The day after the Perry incident, Sen. Gonzalo Barrientos, D-Austin, chastised the governor for meddling in the Senate vote, and Republican Lt. Gov. Bill Ratliff said that in his 12 years in the Senate, it was unprecedented to delay action on a bill because two senators happened to be absent.

Gay and lesbian rights lobbyist Dianne Hardy-Garcia had this to say about Perry's maneuvering on the hate crimes bill: "He tried to handle it the way George Bush handled it. But Rick Perry is no George Bush. People are not going to make the exceptions they made for someone waging a national campaign."