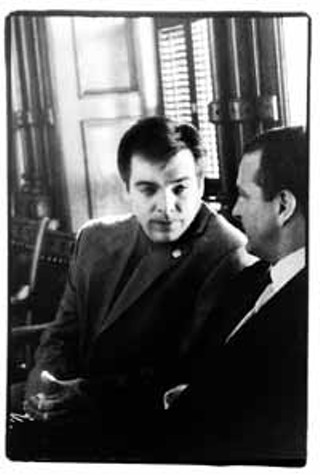 Will Rick Green sprout his first gray hair before the reviled Bradley bill gets another go-round at the Lege? (Photo By Jana Birchum)

Will all of Gary Bradley's wheeling and dealing be to no avail? Will Kirk Watson win back the hearts and minds of Austin's eco-conscious? Will Rick Green sprout his first gray hair before the reviled Bradley bill gets another go-round at the Lege? All this and more will be revealed in the next few weeks, as a solidly opposed Austin City Council takes on the Dripping Springs whippersnapper, whose legislation (by all accounts still moving forward in the House) would create a special taxing district for the Bradley-owned Spillar tract in Hays County, where a luxury hotel developer wants to build a hotel and golf course resort.

Last week, Green lost another potential ally when the Hill Country Conservancy, which theoretically could have received millions in tax proceeds from the "environmental preservation" portion of the bill, pulled back its support of the legislation, citing discomfort "with the collateral issues relating to this bill and the controversial nature of the dialog," according to an April 12 letter to Green from the conservancy's officers. Among those collateral issues, according to HCC Director George Cofer, was the fact that Bradley had apparently violated his agreement with the city by failing to get the "prior written consent" of the City Council before moving forward with the legislation. "We felt this was not the time for us to get involved," Cofer says.

Also of concern was the possibility that some of the tax revenues dedicated to "the district" in Green's bill would actually benefit Bradley's nascent residential developments there -- and thus would not, as Bradley has claimed, be "for the benefit of the hotel/golf course project," to be built by Bradley partner Lowe Enterprises. Either way, a sizable portion of the revenues from the district -- characterized by Bradley as a "gift" to the environment and the schoolchildren of Hays County (who would also receive a small cut of tax proceeds under Green's bill) -- would go directly into the pockets of either Bradley or a Bradley partner, a fact that has inspired consternation and mass wringing of hands, from the mayor's office on down, ever since this bill was filed last month.

Despite the HCC's rather hasty exit from the negotiations, Green himself seemed determined to move forward with the legislation. On Tuesday, he got a little help from Victoria Democrat (and frequent Austin-basher) Ken Armbrister, who filed legislation in the Senate that would create a similar district with slightly reduced powers (eminent domain, for one, is out), to be known as the "Hays County Education District." All of the new district's tax revenues would go into the coffers of the Hays County Consolidated Independent School District Educational Foundation to promote "employment, commerce, and economic development through the provision of educational facilities, programs, and services in Hays County" -- possibly, some speculate, by locating a school or school district facilities on Bradley's development. That wouldn't happen, however, until all of the district's bonds and other obligations are paid off, a big sticking point in the earlier version of the legislation.

Armbrister's bill would also allow the district to pay off its bonds with "repayments" from the city of Austin for lost hotel and sales tax revenues, in the event the city decides to annex the district, as well as with revenues from unspecified "district contracts, leases, and projects." It also includes a passage defining the district's purpose as eliminating "unemployment and underemployment in Hays County" -- lofty goals for a bill that's been characterized alternately as a shell game by Bradley to finance infrastructure to his developments, and as a "generous offer" by Lowe Enterprises to the schoolchildren of Hays County. "They're selling it even more now as being for the kids, but they're not going to raise a penny of revenue between now and next session," says SOS Alliance general counsel Bill Bunch, who believes the real reason legislators are pushing the bill forward "is to help finance [the district's] infrastructure" through bond sales.

But time is running out for the Hays County hellraiser and his Senate cohort -- with the Lege adjourning May 28, and with council approval (without which Green says he'll pull his bill) seeming an ever-more-distant prospect, it's looking more and more like Bradley will have to find another back door to push his taxing district through. Even Mayor Kirk Watson, typically a bit more diplomatic on the dealmaking front, seemed fed up with the developer everybody thought would go away a year ago. Last week, Watson referred to the district as "a gift for Gary Bradley" and said he could not sign off on a bill that created a "public trough for … private interests" such as Bradley's.

Even if the bill never makes it out of committee, Bradley is sure to capitalize on it anyway, by pushing the Hays Co. government to offer incentives to chip manufacturer AMD -- which is thinking about locating its new fabrication plant somewhere in Central Texas -- to locate on Bradley's property in the Desired Development Zone.

Watson, too, could win big, by (re)positioning himself as the "environmental mayor" just as fundraising season begins for the 2002 statewide elections.