Are Balcones Canyon Land Flips Too Much for Sports Bikers -- and Too Little for Wildlife? 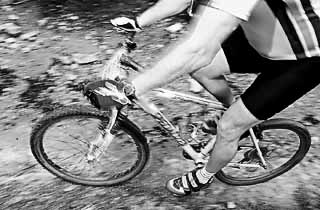 Mountain bikers as well as birds are becoming endangered species in the Balcones Canyonland Preserve. (Photo By John Anderson)

On the Saturday after Valentine's Day, the cop at the gate near the Forest Ridge section of the Balcones Canyonlands Preserve (BCP) wasn't in the mood for love. Instead, he was making certain that Spandex- and Lycra-clad sports enthusiasts didn't break the law by riding their mountain bikes through the endangered songbird habitat. When sport-utility vehicles topped by mountain bikes pulled into the parking lot abutting Bull Creek, the officer would climb out of his Austin Parks and Recreation rig and explain that as of midnight, February 14, this preserve -- one of Austin's best spots for trail riding -- was closed to cyclists. "I suggest you get used to it," he said. "It's going to be at least five years before they open this to bikes again."

Bikers are not the only ones getting the boot. Horseback riders have long complained they are no longer allowed on land that has become part of the BCP. The preserve is an extensive checkerboard of acreage throughout western Travis County, acquired to offset the pressure of development on endangered species such as the golden-cheeked warbler and black-capped vireo -- as well as less charismatic species some call "cave bugs." Even hikers and birdwatchers are denied access to the preserve during the spring, so birds are not disturbed during their nesting season, which extends from early March through July. (There are some exceptions for hikers and birders willing to enroll in an Austin Parks and Recreation education program.)

"I understand that mountain bikers are disappointed at losing this site," says Don Koehler, city manager for the BCP. "But what most people don't realize is that the land on Forest Ridge was private land before the city owned it, and these activities were unsanctioned." Koehler goes on to confirm that pending the conclusion of studies of the effect of bikers and other disturbances on the nesting behavior of the golden-cheeked warbler, Forest Ridge will remain off limits to cyclists for at least five years. That's not good news for mountain bikers, who have been literally losing ground in the Bull Creek area for some time. If you talk to old-timers, they point out that while the land was in private hands, there were miles and miles of trails in the hills of northwest Travis County. Due to the changing face of Austin, bikers are beginning to identify with songbirds that stand to lose 70% of their nesting habitat throughout the Texas Hill Country -- the only place on Earth where the golden-cheeked warbler is known to breed. Cyclists complain that Austin Parks & Wildlife is forcing them to pay for development that county commissioners and City Council members bend over backwards to accommodate. "I'd expect to see them sell that property before they allow bikes back on the land," says Britt Jones, the new president of Austin Ridge Riders, a mountain-bike advocacy group.

The Balcones Canyonlands Conservation Project, which took nearly a decade to put together, turns five years old in May. (For an overview of the lands constituting the preserve as well as its restrictions on recreational uses, see "Living on the Edge," p.28.) Outlined in a document that spans three volumes and more than 1,000 pages is a program authorizing the purchase and protection of more than 30,000 acres by both the City of Austin and Travis County, as part of what's known as a federal Habitat Conservation Project -- a Clinton Administration initiative designed to protect endangered species' habitat while providing private landowners flexibility in land-management decisions. In addition to the City of Austin and Travis County properties, tracts of the preserve are owned and managed by the Lower Colorado River Authority, Texas Audubon Society, and the Nature Conservancy. The "BCCP," as the preserve is still commonly called -- though after the "conservation plan" was implemented, the project became the "BCP," or Balcones Canyonlands Preserve -- made it clear from the get-go that only low-impact activities, such as hiking and wildlife viewing, would be allowed on the preserve. And even Jones acknowledges that this particular land-use change was bound to come sooner rather than later. Biking and horseback riding, which allow people to travel far and fast and can contribute to erosion and the spread of exotic weeds, are considered high-impact activities and were never part of the plan.

Yet it is odd that recreational bikers complain loudest, while even the property rights radicals of the so-called "Wise Use" movement find it difficult to oppose a program that targets landowners willing to cooperate with the effort to set aside green space as a counterbalance to Travis County's rapid development. The new census shows that the county's population grew by a remarkable 26.1% over the last 10 years; the national growth rate was 9.6%. Continued acquisition of land has been pushed by Austin Congressman Lloyd Doggett and Travis County Commissioner Karen Sonleitner, who led a bipartisan delegation to Washington to lobby on behalf of the BCCP, and obtained $4.1 million in federal monies last year. Last month, Doggett and Sonleitner announced that Austin and Travis County would receive an additional $14.3 million in 2001. Already, almost 25,000 acres, nearly 80% of the land targeted, has been purchased, largely by money flowing directly from Washington, D.C. The new grant, like those before it, will be supplemented by local funds, which would bring the total amount to $19.1 million for the year, allowing for the purchase of about 1,000 acres spread across six parcels. "We've made incredible progress," says Sonleitner. "We're going to celebrate the five-year anniversary of the [BCCP] agreement in May, but it's getting harder and harder to pull together these parcels. I always say, it needs to be sooner rather than later, and it needs to be yesterday not tomorrow. We've still got a ways to go."

The recent federal grants reflect former Interior Secretary Bruce Babbitt's dedication to local conservation efforts. For fiscal year 2000, $15 million was authorized for habitat, and in 2001 that number more than quadrupled, reaching $69 million. But with the Bush Administration proposing cuts of almost 4% to the Interior's 2002 budget, acquisition of land by the government -- a low priority at the state level in Texas while Bush was governor -- is probably on hold until at least 2004. The race to save the endangered species is itself endangered by related difficulties faced by the U.S. Fish and Wildlife Service. The agency has outlined plans for a separate 46,000-acre National Wildlife Refuge, intended to provide additional insurance against extinction for the golden-cheeked warbler and black-capped vireo, but they're still a long way from their goal. The Fish and Wildlife program still lacks at least $10 million before it can complete purchases for its Balcones Canyonlands National Wildlife Refuge, which, according to federal wildlife biologist Chuck Sexton, would be spread piecemeal across Travis and Hays counties.

Conservationists complain that even if Fish and Wildlife finds a way to pay for all 46,000 acres and the city-county partnership manages to secure its projected total of 30,428 acres for the BCP, survival for the songbirds or the six cave-dwelling invertebrates listed under the Endangered Species Act is not a safe bet. The problem from the environmental perspective is twofold. First, the BCCP was designed to allow developers to continue developing, by providing landowners a way to offset the "incidental take" of endangered species -- in other words, death or habitat destruction resulting from development -- with cold, hard cash to apply toward the purchase of preserve acreage. In other words, developers buy the right to destroy existing habitat, by paying into the BCP fund, which is used to acquire habitat to compensate for the habitat the developers destroy. Second -- and equally as important to understanding the trouble with this sort of habitat conservation plan -- is the fact that the BCCP explicitly allows for the loss of most of the Travis County habitat left to these endangered species.

In a 1998 report on a dozen national efforts to create habitat conservation plans, Laura C. Hood of the national environmental group Defenders of Wildlife writes: "Of the plans reviewed here that include establishment of preserves according to principles of preserve design, the most disappointing example was the Balcones Canyonlands Conservation Plan.... The plan allows take of 55% of the black-capped vireo ... and up to 71% of the identified golden-cheeked warbler habitat ... While the acreage of the preserve and the wildlife refuge captures much of the large, relatively unfragmented habitat patches for the birds, and while habitat management will slow habitat degradation due to public use, the preserve design falls far short of original, biologically based expectation." In other words, the BCCP does not do enough to offset the pressure of development. In fact, in original habitat conservation plan documents that took into account the 46,000-acre federal refuge as well, scientists recommended more than doubling the size of the BCP.

Environmentalists see the restrictions on development as too little, and bikers see the restrictions on recreational space as too much -- two arguments that appear logical in light of the habitat conservation plan's admitted shortcomings. Yet local officials continue to defend the plan. Commissioner Sonleitner doesn't hesitate to use the "C" word, which is often anathema to radical environmentalists, and goes so far as to say: "The 'C' in BCP stands for compromise and not for conservation. I tell people who don't care about the birds and the bugs that at some point the whole of Travis County is going to be built out, and these preserves are going to be one of the last green spaces we have. They will provide a place where you can rest and take a break from the rigors of living in the city, and even developers are beginning to see the advantages of these preserves." U.S. Fish and Wildlife biologist Sexton adds, "In theory, the design of the preserve system, if we are able to implement it fully, will provide enough habitat for these species."

The city's Don Koehler also argues that the program might work, despite its modest scale. "The BCP is the only habitat conservation plan of its type," says Koehler. "This is the only HCP to try and conserve endangered species habitat in an urban setting." Koehler says development is not the only challenge confronting endangered woodland species. Threats include both feral and neighborhood cats that prey on the songbirds, an exploding local white-tail deer population that browses the forest under-canopy and consumes nesting material, and packs of hybrid hogs gone wild that tear up the forest floor, destroying habitat, knocking down trees, and contributing as much to hillside erosion as any cyclist ever did. On Forest Ridge these elements, hastened both by development and government's attempt to slow it, threaten to turn the last, best place for golden-cheeked warblers into Paradise Lost -- both for the endangered species who depend on the land for survival, and for the bikers who had come to depend on it for recreation.