Putting Texas Politics on the Map 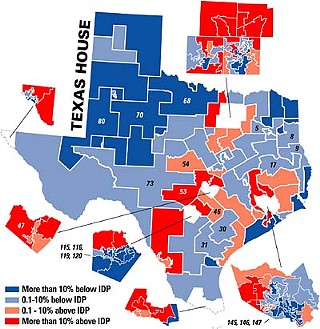 In the Lege, the range between the smallest and largest districts can be up to 10% of the "ideal district population," which is simply the total official state population (20,851,800) divided by the number of districts. That's a good thing when cramming 150 Texas House seats onto the map, because each of Texas' 254 counties is supposed to be either wholly within a single House district or contain at least one complete district.

An example: Dist. 46 (Hays, Caldwell, and Gonzales counties) now has 9,399 too many people. Dist. 30 (Victoria, Goliad, DeWitt, and Lavaca counties) has 8,773 too few people. And Gonzales County has 18,628 people. But you can't just split Gonzales in half, because that would violate the county-line rule, unless you have no other choice. So instead, the Lege has to move population sequentially, in a chain of counties across the state -- possibly, Blanco from Dist. 53 (Harvey Hilderbran) to Dist. 46 (Rick Green), Gonzales from Dist. 46 to Dist. 30 (Geanie Morrison), Goliad from Dist. 30 to Dist. 31 (Judy Hawley) -- to make everyone fit.

In Central Texas, every district is too big, generally way too big. So it's likely you'll see a new seat in Travis County, mostly extracted from Dist. 47 (Terry Keel), now the most crowded in the whole state. And Dists. 53 and 54 (Hildebran and Mike Krusee) are both so overweight that a new seat, including Burnet and western Williamson Counties, seems likely.

We say "new," but there still are only 150 seats to go around. And with equally groaning needs for new seats in and near Denton, Collin, Fort Bend, Montgomery, and maybe Hidalgo counties, some state reps are going to be looking for new work. The likely victims will be in East Texas, Harris and Bexar Counties, and especially the Panhandle/Plains region, where every district west of Weatherford and north of the Pecos is way underweight. (In Dallas, Tarrant, and El Paso counties, as well as in South Texas, the declining and booming districts largely cancel each other out; the Lege just needs to move the lines).

Look for trouble in Dists. 5 (Bob Glaze), 8 (Paul Sadler), 9 (Wayne Christian), and 17 (Jim McReynolds) in the east; 115 (Mike Villarreal), 116 (Trey Martinez Fischer), 119 (Robert Puente), and 120 (Ruth Jones McClendon) in San Antonio; 145-147 (Rick Noriega, Al Edwards, and Garnet Coleman) in Houston; and 68 (Rick Hardcastle), 70 (David Counts), 73 (Bob Turner), and 80 (Gary Walker) in the west. Because of where these districts are and where these reps live within the districts, these are the folks most likely to get "paired," or dumped into districts with their neighbors. Interestingly, Glaze, Sadler, McClendon, and Counts are all on the House redistricting committee.