Sheffield, the APA, and the Cop Wars

A Brief History of the APA 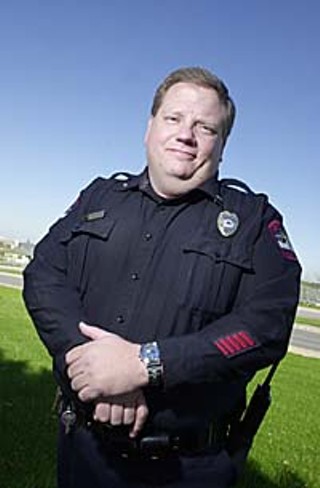 "The key to being APA president," says Mike Sheffield, "is learning how to disagree with people." That is, how to disagree effectively. Prior union leaders have done plenty of disagreeing, and sometimes they've been downright disagreeable about it.

Take, for example, Lt. Dell Shaw, APA president from 1987 to 1989, who led the association's first-ever direct attacks on City Hall, buying radio ads to protest budget cutbacks and threatening legal action if the City Council voted to remove the Halloween barricades on Sixth Street. Shaw was defeated in his re-election bid by the prototypical Officer Friendly: Senior Sergeant Sam Cox, already a local celebrity as the KLBJ-AM and KXAN-TV traffic reporter. Cox promised a more "diplomatic" and "measured" style.

Among the major events of Cox's four years at the helm was the unraveling of Dell Shaw's life, and the disgrace of APD along with it. First, Shaw's best buddy on the force, Sgt. Byron "Bubba" Cates -- head of the APD vice squad -- got busted in 1991 for having sex with, and then sharing profits with, massage-parlor madams of his acquaintance. When Shaw testified in Cates' defense, federal prosecutors leaked their interest in Shaw's best civilian buddy, ultra-eccentric millionaire Charles Kallestad, who had problems with both bad debts and teenage girls. (Kallestad liked to take pictures, you see. He also liked cops, having many in his entourage.)

It turned out that the house in which Kallestad was living, partying with cops, and snapping (and more) nude women and girls, was actually owned by Shaw. This, prosecutors say, was an attempt to hide both Kallestad and his money from his creditors. The bankrupt businessman and the purged lieutenant got sent upriver for bank fraud in 1993, Shaw serving two and a half years. At his trial, several veteran APD officers, including now-Deputy Chief Bruce Mills, testified that their former union president was not known within the department for his honesty and truthfulness. As late as 1997, APD officers filed whistleblower suits alleging departmental retaliation because they crossed Shaw and his posse, known within APD as "The Family."

So, with the APA looking to the public like a gang of thugs, Cox had his work cut out for him. For the most part he was able to keep the union afloat. But just how seriously the APA and Cox were then taken by people who mattered was demonstrated in 1992, when City Manager Camille Barnett hired former Houston Chief Elizabeth Watson without mentioning her plans to the APA beforehand. As Cox sputtered and fumed, the union narrowly decided to give Watson a chance.

By the time that chance ran out, Cox had been succeeded by detective Mike Lummus, who brought Mike Sheffield on board as vice-president. Under Lummus, the APA head's job was easy: Oppose Watson at every turn. (This was when officers wore T-shirts reading "Life's a bitch, and then you get one for police chief.") When Watson fired officer Danny Gratten (an African-American 11-year veteran) for clubbing a 14-year-old suspect -- and announced she'd fire any officer who used excessive force -- the APA went into high gear to dig up dirt on Watson, get her canned, and perhaps get Barnett canned as well. (The latter turned out not to be necessary, as an accounting meltdown at Brackenridge Hospital gave Mayor Bruce Todd an excuse to show Barnett the door in 1994.)

After Watson proposed a reorganization that replaced officers with civilians in key management positions, the APA's opposition culminated with its first-ever no-confidence vote in a chief -- an officially meaningless but highly embarrassing occasion for the city. However, central-city progressives and communities of color, including the minority police organizations Amigos en Azul and the Texas Peace Officers Association (headed at the time by current City Council Member Danny Thomas), were solidly behind Watson, and the APA's splenetics came at some cost to cultural harmony within the department and respectability at City Hall.

What brought APA back into the tent was the first Meet and Confer agreement in 1997. The union, and its statewide partner the Combined Law Enforcement Associations of Texas, were a bit surprised that the city was amenable to changes in state law allowing collective bargaining, and the deal -- executed under Watson but implemented after her departure -- paved the way for somewhat less dysfunctional labor relations.

Into this climate stepped Sheffield and Police Chief Stan Knee, who've managed through luck and fortitude to make the Cop Wars a somewhat distant memory. Still simmering, of course, are such high-profile embarrassments as the Samuel Ramírez case (whose trial for "official oppression" began Tuesday), the recent exoneration of Chris Ochoa and Richard Danziger, and the uncertainly concluded Mala Sangre investigation (see "Bad Blood," by Jordan Smith, Feb. 16). The public oversight system just adopted might not have solved such problems -- after all, Knee did try to fire Ramírez -- but it, along with other provisions of the Meet and Confer, suggests that cooperation between union, management, and customers is no longer impossible. Both the union and the department "exist to serve, not to be served," says Sheffield. "If we keep that in the front of our minds, we'll all make better decisions."