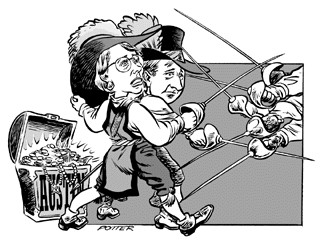 The devil is in the details, they say, and never is that more true than when the City Council is about to vote to do something they don't want to do. Council Member Beverly Griffith made Assistant City Manager Betty Dunkerley run through every component of the cost of the city's planned homeless shelter on East Seventh Street, from inspection and geotechnical study fees on.

Griffith was understandably concerned, given that the price tag on the shelter has doubled since it was first proposed three years ago -- from $3.9 to $7.8 million. But the price tag isn't really inflated, Dunkerley told the council, once the skyrocketing price of land and construction is factored in. There's also the small detail that under the terms of the original proposal the Salvation Army would have paid for the land and the associated fees -- everything but the $3.9 million cost of construction itself.

Negotiations with the Army broke down last November, when its Atlanta headquarters changed the terms of the agreement at the last minute, including the length of the lease and the measures the city could take to deal with public intoxication and violent behavior at the shelter. That left the city holding the ball and forking over the remainder of the shelter's cost.

Both Griffith and fellow Council Member Will Wynn characterized the shelter as "cots on a concrete slab" and tried to tot up the cost per cot by dividing the $7.8 million price by the 100 beds the shelter will provide. The figure they arrived at is misleading, Dunkerley said, pointing out that the shelter also includes kitchen, shower, and laundry facilities. Dunkerley also noted that a sizable chunk of the cost is in "front-end expenses" that should pay for themselves in time, like the cost of building the shelter under energy-efficient (and city-sponsored) Green Builder guidelines.

In the end, everybody but Griffith and Wynn managed to bend their minds around the inflated price and approve the initial outlay for the shelter: $1.4 million for four lots downtown. "We've been talking about this for a long time and we need to move," said Mayor Kirk Watson, while warning that the city can expect to make more outlays of this kind in the future, given the current "stagnation in funding from the state of Texas." "More and more," Watson said, "Cities and urban centers are being called on to provide the kind of social services that used to be provided in other ways."

Things should ease up for Smart Growth, with two major revampings set for the council's vote: this week for the Development Review and Inspection Dept., and for the Planning Commission … well, some time soon (see below).

First in line for a council makeover is DRID, which would no longer exist under the council's current plan. Instead, the city would form a new Neighborhood Planning and Zoning department, which would be in charge of (duh) neighborhood planning, zoning, and compliance with city codes. Alice Glasco, current head of DRID, would helm the NPZD. Meanwhile, some of the duties of the former Planning, Environmental, and Conservation Services Dept., and the former Transportation and Public Works Dept., would be transferred to the (also new) Transportation, Planning, and Design Dept. (The rest of the department formerly known as Transportation and Public Works would be known simply as the Public Works department, in charge of dainties like street inspection and drainage.) Finally, what's left of DRID will join the old Watershed Protection Dept. and become … the Development Services and Watershed Protection Department!

Confused? Bored? Dizzy? Trust us, it was worse before. The convoluted neighborhood planning process was the single most constant source of citizens' complaints under the old system. And while none of the new acronyms is nearly as snappy or pronounceable as DRID or PECSD, "there's definitely a benefit for time and accountability in having the zoning, planning, and review processes in one department," says Assistant City Manager Marcia Conner, who was supposed to head up this effort, and who on Tuesday was offered a job as city manager in Durham, N.C.

Meanwhile, under the auspices of Mayor Pro Tem Jackie Goodman, the times are also a-changing down at the Planning Commission, whose job it is to examine planning and zoning initiatives before they go before the council, carefully measuring to make sure nobody is violating the sacred tenets of the Land Development Code (a weighty document Goodman describes as "huge, complex, confusing, and occasionally contradictory"). The PC frequently served as a mediator between the city and concerned citizens who thought the condos going in next door were just too darn big.

While the commission, in theory, had one meeting a month during which they were supposed to discuss actual planning issues, things rarely happened that way, Goodman says, "because there were too many zoning cases, often with long and involved public hearings."

The new-and-improved Planning Commission, meanwhile, would work on new and existing neighborhood plans -- they would be the "visionaries," in Goodman's words, "who craft the practical means of implementation."