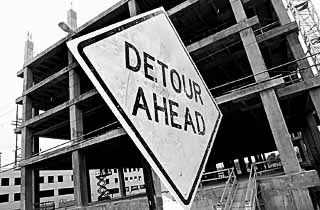 First Intel announced it would halt construction on its downtown chip design center after it finished the building's concrete shell, citing short-term economic uncertainty. Then it announced that -- whoops! -- it wouldn't be finishing the exterior after all, leaving a hulking steel-frame monolith in the center of one of downtown's busiest intersections. So now it's your turn: What would you do with the Intel shell? Would you turn it into a movie set? A hotel for the homeless? A 3-D billboard for Kirk Watson's next campaign? Send us your ideas on how to reuse, revamp, and revitalize this downtown eyesore no later than April 13, 2001; we'll pick the most creative, fanciful, and intriguing ideas and run them in a later issue. The grand prize winner will receive a catered dinner for four, courtesy of Chronicle food editor (and caterer extraordinaire) Virginia Wood, in Republic Park, directly across from downtown's most notorious landmark.