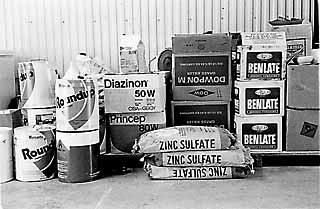 Like Erin Brockovich -- whose personal story provided the screenplay that has Julia Roberts in line for an Oscar -- Elaine Ross was determined to uncover the truth. Brockovich was a California paralegal engaged in a crusade against toxic polluters. Ross was the widow of a chemical plant worker, and she wanted to know what had killed her husband, at the untimely age of 46. She teamed up with crusading lawyer William "Billy" Baggett Jr., the son of a famous Southern litigator, and together they have become central figures in a David-and-Goliath battle to protect the health of all Americans, especially workers.

The latest chapter of Ross' story will be told by a team led by Bill Moyers, on a PBS special report called Trade Secrets, which airs Monday, March 26. The program, based on chemical industry documents, explores allegations that the industry obfuscated, denied, and hid dangerous effects of chemicals on unsuspecting workers and consumers. At its core is a troubling question: With more than 75,000 chemicals having been released into the environment, what happens as our bodies absorb them, and how can we protect ourselves? The Moyers special is also expected to re-energize veteran health activists and medical professionals in their fight against a growing problem -- unregulated and untested chemicals flooding the commercial market place. This public heat, coupled with a burgeoning grassroots resistance to chemical producers, is expected to put the industry on the defensive.

Legal Battle in the Bayou

Elaine Ross's husband, Dan, spent 23 years working at the Conoco (later Vista) chemical plant in Lake Charles, La. After being diagnosed with brain cancer, according to Jim Morris of the Houston Chronicle, "Ross came to believe that he had struck a terrible bargain, forfeiting perhaps 30 years of his life through his willingness to work with vinyl chloride, used to make one of the world's most common plastics."

"Just before he died [in 1990] he said, 'Mama, they killed me,'" recalled Elaine. "I promised him I would never let Vista or the chemical industry forget who he was." And she hasn't. Elaine Ross teamed up with Baggett to file a wrongful death suit against Vista. Baggett won a settlement for Ross, but she wasn't satisfied with just the money. She knew that her husband's death wasn't an isolated incident -- that many other chemical plant workers were dead, dying, or sick because their employers weren't telling them about potential health hazards. And Vista wasn't the only culprit. So Ross told Baggett to take the fight to the next level. He did, suing 30 companies and trade associations, including the Chemical Manufacturers Association (now called the American Chemistry Council), for conspiracy, alleging they hid and suppressed evidence of vinyl chloride-related deaths and diseases.

The companies fought back, trying to get the suit thrown out of court. But in a crucial decision, Delaware Superior Court Judge Fred S. Silverman denied the motion, allowing Baggett to proceed with his suit and giving him access to thousands of previously secret documents. These "Chemical Papers" chronicled virtually the entire history of the chemical industry, much of it related to vinyl chloride, a plastic used in products such as water pipes and garden hoses. The papers include minutes of board meetings and committee meetings, consultant reports, and other industry documents the public has never seen.

According to Morris, the documents suggested that major chemical manufacturers closed ranks in the late 1950s to contain and counteract evidence of vinyl chloride's toxic effects. "They depict a framework of dubious science and painstaking public relations, coordinated by the industry's main trade association with two dominant themes: Avoid disclosure and deny liability." The chemical companies were hiding the fact that they had "subjected at least two generations of workers to excessive levels of a potent carcinogen that targets the liver, brain, lungs, and blood-forming organs."

"Even though they [the chemical companies] may be competitive in some spheres, in others they aren't," Baggett said. "They have a mutual interest in their own employees not knowing [about health effects], in their customers not knowing, in the government not knowing."

"There was a concerted effort to hide this material," said Dr. David Rosner, a professor of public health and history at Columbia University who has reviewed many of the documents as part of a research project. "It's clear there was chicanery." In a prepared statement, the Chemical Manufacturers Association called such charges "irresponsible." The group said it promotes a policy of openness among its members.

From Courtroom to Television Set

TV producer Sherry Jones had also been taking a close look at the chemical industry and its secret ways. She showed her findings to Bill Moyers, and the result of their collaboration is Trade Secrets, a 90-minute special that will be followed by a 30-minute roundtable discussion among industry representatives and advocates for public health and environmental justice. Airing the night after the Academy Awards -- where Julia Roberts might get an Oscar for her portrayal of Erin Brockovich -- the program will focus unprecedented attention on the chemical industry. It is a moment that will be seized upon by citizen activists and health experts, who have been fighting for decades to protect the public from untested and unsafe synthetic chemicals, often in the face of public misconceptions. For example, almost 80% of Americans think that the government tests chemicals for safety, which is untrue. Aside from chemicals directly added to food or drugs, there are no health and safety studies required before a chemical is manufactured, sold, or used in commercial or retail products. The same is true for cosmetic products and the chemicals in them.

If the government isn't regulating chemical safety, who is? Unfortunately, the chemical industry itself. As public health advocates have long complained, this self-regulation isn't enough. "For the most part, we rely on chemical companies to vouch for the safety of their products," says public health advocate and former nurse Charlotte Brody. "That's like relying on the tobacco industry to assess the risk of tobacco." Take the case of Dursban, Dow Chemical's indoor insecticide. Even after 276 people filed lawsuits claiming they were poisoned by Dursban, Dow didn't reveal information about the nature and extent of Dursban's toxicity. When the truth finally came out in 1996, the Feds fined the company $740,000 for withholding information from public officials.

Critics who have argued that strong government regulation would have prevented such fiascoes are now counting on Trade Secrets and the Chemical Papers to advance their argument in a way it has never yet been advanced.

Using the Moyers special as a rallying point, a coalition of grassroots groups called Coming Clean has joined together to confront the chemical industry. In early March, dozens of national leaders -- health professionals, scientists, activists, and media experts -- gathered for a weekend retreat in northern Virginia to plan a long-term campaign. "For decades, chemical companies kept secret the hazards of chemicals they produce," said Gail Vittori, a veteran Austin activist and organizer working on the Coming Clean campaign. "These chemicals are in our food, our water, the air we breathe. Now, they're in all of us. Every child on earth is born with these synthetic chemicals in their bodies, and only a small percentage of these chemicals have been adequately tested."

As a first step, Coming Clean plans to unite the public around the information presented in Trade Secrets. Across the country, thousands of events and viewing parties are being organized, timed to coincide with the PBS program. The events recall the campaign surrounding the 1980s nuclear holocaust film, The Day After, which galvanized a vanguard of anti-nuke activists to oppose the arms race. Momentum around the Moyers special seems to be picking up. The Whole Foods chain has agreed to carry Coming Clean flyers in every one of its stores, and many e-mail listservs, chat rooms, and message boards are buzzing about the show.

While most viewings will happen in private homes, activists in dozens of cities -- from Anchorage to Austin -- are holding public viewing events. In Austin, environmental organizers will gather at 6:30pm, Monday, March 26, in the west dining room at Scholz Garden at 1607 San Jacinto, for discussions and meetings before the program airs at 9pm. Several local elected officials and legislators have been invited. "We'll be asking what this means to us in Austin, as players in the global economy." Vittori said. "And what we can be doing as informed citizens." Eventually, the coalition hopes to generate support for government regulation and class action litigation against the chemical giants. Some organizers are hoping that Congress finally wakes up and focuses a spotlight on the chemical industry, while others are calling for corporate accountability. Says Gary Cohen, a leader of the Boston-based Environmental Health Fund and co-coordinator of the group Health Care Without Harm, "The American people deserve to know what chemical executives knew and when they knew it."