Will Clerk for Perks 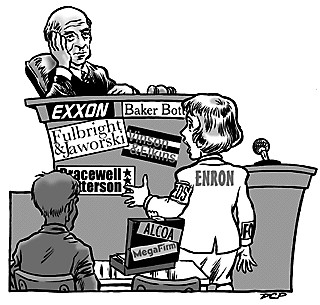 The other wing-tip has fallen at the state Supreme Court, where questions were raised about court clerks' agreements to work for law firms with cases pending before the court ("How a Law Becomes a Bill," Feb. 9). When Texans for Public Justice pointed out that such private arrangements -- especially paying large bonuses or other benefits to clerks who agree to join the firms after finishing their clerkships -- appear to violate the penal code, at least one law firm suspended the practice, and Chief Justice Tom Phillips appealed to the Legislature to either give his court a bigger staff budget or fix the law. While the Lege ponders the problem, Travis County Attorney Ken Oden, whose office has jurisdiction to prosecute for bribery under the code, has been waiting politely in the wings.

Phillips' plea may have been answered, as Sen. Chris Harris, R-Arlington, has filed SB 1111, which would deal with the conflict question by generously making the practice legal. As filed, Harris' bill not only allows the employment arrangements to continue at the court, but extends the principle to any state office. (Apparently, the state attorney general's office had been exploring the question of "sponsored" employees, but was told the practice is currently illegal.) Under the Harris bill, all that would be required is that the employee disclose the arrangement -- the bill does not even require that a clerk recuse himself from matters involving his future employer. As TPJ sees it, the Harris bill would potentially allow "Exxon to sponsor TNRCC employees, or EDS to sponsor Health Department staff."

Strict constructionism is better represented by a pair of bills filed by Sen. Royce West, D-Dallas, and Rep. Jim Dunnam, D-Waco. SB 1210 and HB 2889 would outlaw the current practice of sponsoring clerks at the Supreme Court (or any other court). Clerks in their final three months of court service would be allowed to negotiate with future employers, but could not accept bonuses and would have to recuse themselves publicly from any matters involving those employers. "It still allows for prior offers," said TPJ's Cris Feldman, "but not outright bonuses … Once you take the bonuses, you're under contract. The disclosure goes a lot farther, and that's probably about the best that we can get."

County attorney Oden told the Chronicle there are definite public benefits to some private involvement in state employment, as strict enforcement of current laws would forbid even pro bono "lawyers on loan" programs, under which private firms pay the salaries of young attorneys gaining experience in government service. Oden said he told legislative staff members working on the bills that "if you're going to consider [such practices], you should only do so for those employees and professions subject to explicit ethical codes [like state bar members], and you should require full disclosure of any private arrangements. … But I don't think we serve the public," Oden concluded, "by just dismissing consideration of either side of the discussion out of hand." He said that if no changes are made in the current law, "The present system of hiring Supreme Court clerks would have to be modified to be in compliance with the law in the future -- and other potentially good programs would have to be limited."

It's not clear what sort of bill will come out of committee, but a spokesperson for Rep. Dunnam said, "I suspect somewhere in the middle is where we're going to come out." There's still the possibility that state government could end up looking like a NASCAR race, with once-public employees sporting dozens of "sponsor patches" identifying their real CEOs.