Bennett There, Done That 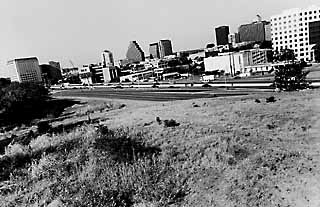 Since 1991, the eight-acre Bennett Tract, across 1-35 from downtown, has been vacant, awaiting a Planning Commission decision on its zoning. (Photo By John Anderson)

By the time you read this, the second Watson administration -- motto: "Anything Past Councils Did, We Can Do Better" -- might have finally run out of decades-old controversies to "resolve" with a flourish. If it hasn't already, the City Council will soon rezone the Bennett Tract and plant a SmartGrown seed firmly on the east side of the interstate. Whether that seed will bear fruit and replace the weeds that have grown on the tract for a decade is anybody's guess.

The Bennett Tract lies east of I-35 between Seventh and 11th Streets, north of the French Legation. Since 1991, it's been zoned for a shopping mall that, you may have noticed, isn't there. Partly, that's because the erstwhile East Side Mall was a silly speculative boondoggle to begin with. And partly, it's because the neighbors have fought the downtown-ization of the Eastside tooth and nail. That is, the primarily Hispanic and Anglo residents of the Guadalupe neighborhood. The African-American neighbors, and especially the adjoining Ebenezer Baptist Church, supported the mall as a needed economic engine for the Eastside.

So it was us vs. them vs. them, and the mall project being brokered -- or "pre-developed" -- by California-based Bennett Consolidated was so controversial that the City Council back in 1991 laid down a condition decreeing that if dirt wasn't turned within two years, the zoning would revert to the more neighborhood-friendly rules that applied thereto. No dirt was turned, but when the appointed hour came in 1993, the zoning didn't go away. But Bennett did.

Now, the option on Bennett's holdings is held by Riata Development Corp.'s Matt Mathias, who's also developing the first Austin Revitalization Authority projects on East 11th Street. And although what Mathias wants to build isn't quite as brutal as the visions of the East Side Mall -- which would have left Guadalupe neighbors looking at a 120-foot parking garage -- it's still pretty downtown, including 200-foot towers on the interstate, and commercial development on the inside of the tract along San Marcos Street. 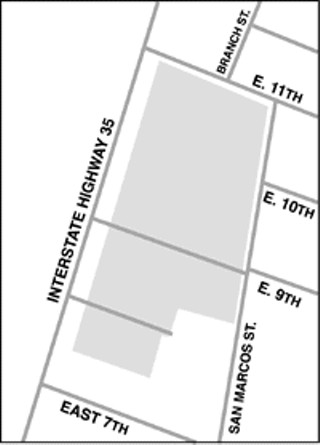 Most of the properties surrounding the Bennett Tract (gray) are zoned for residential use; under the new zoning, many properties inside the zoning area will be mixed-use and commercial.

But Mathias is a local guy, and before Bennett II: The Sequel could turn into a bloodbath, the city convinced him to enter mediation with the neighbors to see what could be resolved. That lasted for nine months but ended at an impasse, which led to a hasty staff recommendation, which the Planning Commission -- after 11 postponements -- appointed a subcommittee to "fine-tune," and which the whole PC spent two hours further massaging Tuesday night.

Some of this last-minute labor might have been avoided if the staff recommendation had indeed responded to the obvious issues at play. In a further complication, back in 1998 the ARA's Central East Austin Master Plan included a nonoffensive proposal for multifamily housing on the Bennett Tract, which even Guadalupe thought was more modest than it needed to be. (The actual city-sponsored Central East Austin neighborhood plan is not yet complete.)

But the ARA plan was the closest thing to an on-record community consensus that existed, so the city was (in theory) supposed to start with that and work its way up to something that Mathias and the neighbors could accept. But the staff recommendation from two weeks ago instead started with the existing shopping-mall zoning, imposed Mathias' plan onto it, did some minor reductions of the heights, and left it to the PC to try and make Guadalupe happy.

"Everybody wants something to be built there, and [the city is] trying to balance giving the developer a big enough envelope to allow something to be built on this tract, without killing off the neighborhood," says Guadalupe Neighborhood Development Corp. Director Mark Rogers. "But they're starting with this massive downtown development and trying to back it into the neighborhood, so it's hard. It's never really sunk in that the ordinance here is supposed to protect the older neighborhood."

"The ordinance" is the 1991 East 11th Street Neighborhood Conservation Combining District, or NCCD, an acronym familiar to Hyde Park Baptist watchers. As was true in Hyde Park, the NCCD for Bennett was misused -- even PC Chair Betty Baker says so -- to allow exactly the sort of neighborhood-killing development it was supposed to avert. What the city is doing now is amending the NCCD, even though they might be better off simply repealing it and starting over.

The sausage left after the PC meeting Tuesday may be unpalatable to everyone at the table. The commission imposed several neighbor-friendly restrictive covenants -- like turning the protected Capitol-view corridor from the adjoining French Legation into a public plaza -- that Mathias may not accept. And Guadalupe is balking at San Marcos Street being home to mixed-use, and thus partly commercial, development. "It just makes no sense," says Rogers. "It's planners thinking that it would be nice if the neighborhood had some shops there, even though the neighborhood is screaming that they don't want it or need it."

So now the neighbors, and perhaps Mathias, turn their attentions to the council, which was scheduled to vote on this today but probably won't. "This is a lot bigger than Gotham or Hyde Park Baptist," says Rogers. "It's comparable to the Triangle, and nobody wanted to rush the Triangle. They could destroy a 100-year-old neighborhood and screw up I-35 for years, or we can build something everyone supports that will be good. We need more time to digest this, so we can wake up at 3am and say 'Wait! We didn't think about that.' We've taken one big step improving what was there with Bennett, but considering what a hydrogen bomb Bennett would have been to our neighborhood, is this just an atom bomb? Will we just die a less painful death?"