The Many Faces of Hate 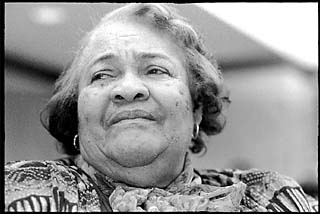 Stella Byrd, the mother of James Byrd Jr., delivered emotional testimony at a Senate hearing Monday on the hate crimes bill named after her son, who was killed in a racially motivated murder. (Photo By Jana Birchum)

Even in death, it's hard for James Byrd Jr. to rest in peace. "His tombstone has been vandalized repeatedly," said Rep. Senfronia Thompson during a slide show presentation that opened Monday's marathon hearing on her hate crimes bill. Thompson, the House sponsor of the bill named in Byrd's memory, secured a 7-2 vote from the House Judicial Affairs Committee, which she chairs. Reps. Will Hartnett of Dallas and Robert Talton of Pasadena, the only two Republicans on the committee, cast the dissenting votes.

Thompson and other advocates believe they have enough votes to obtain passage of the bill in the House, so most of their lobbying work over the next couple of weeks will be concentrated in the Senate, where members are less likely to tip their hands on how they're going to vote. The Senate version of the Byrd bill passed out of committee two weeks ago.

But it was the House hearing on Monday that stole the show, with more than four hours of emotional testimony from a diverse group of people from all corners of the state. "If this bill passes, my son's death won't be in vain," Stella Byrd, the mother of James Byrd, said from her wheelchair. "I don't want no one to go through what I did."

Since Byrd's dragging death on June 7, 1998, new incidents of hate crimes have cropped up in Texas. Donna Nevelov told the committee how her son, the only Jewish child among 4,300 students in the Santa Fe school district, suffered at the hands of other children solely because he was Jewish. Nevelov said one student told her son: "Hitler missed one; he should have gotten you." She has since moved her son out of the district. Another mother, Maria Ross of Katy, described the pain of having to explain to her children why five white men placed a seven-foot cross in the family's front yard and lit it ablaze on Juneteenth -- June 19, the day commemorating the freedom of slaves in Texas. Ross said she and her family will move from their neighborhood, which she described as an affluent community of professionals.

Steve Harris, a restaurant owner in Brownwood, northwest of Austin, told the committee that his hometown has been the setting of several hate crimes over the years, but they've never been reported as such. Harris says anti-gay bullies have harassed him and his partner, and that the two fear the verbal threats may some day escalate to acts of violence. Harris quoted a Brownwood newspaper article detailing the rape of a woman whose attacker apparently knew she was a lesbian. "She reported the man said, 'I'll show you what it's like to have a man,'" Harris said. In another incident, Harris said, a gay Brownwood High School graduate had described instances of harassment and detailed one incident of a sexual assault he suffered while at school, which was also reported in the Brownwood Bulletin. He cited a third incident in which a gay man was executed and set on fire in the parking lot of a Kroger store where he was employed. The 1996 murder remains unsolved, and Harris said many locals believe the killing was a hate crime. He added, "There is a saying that many in our community frequently express -- 'if you want to get away with murder, come to Brownwood.'"

In other testimony, Cruz Saldaña of Austin delivered a heart-rending account of how his brother, Ernie, was beaten to death in an East Austin apartment while his assailants yelled "faggot" and "queer." "If that's not a hate crime, I don't know what is," said Saldaña, who prefaced his remarks by admitting his reluctance to testify, since Monday marked the third session in a row he's asked legislators to pass a hate crimes bill since the 1994 death of his brother, who died on a day that used to be a happy occasion in the Saldaña household.

"Every year on my mother's birthday," said Saldaña, fighting back tears, "we also have to remember the death of my brother."